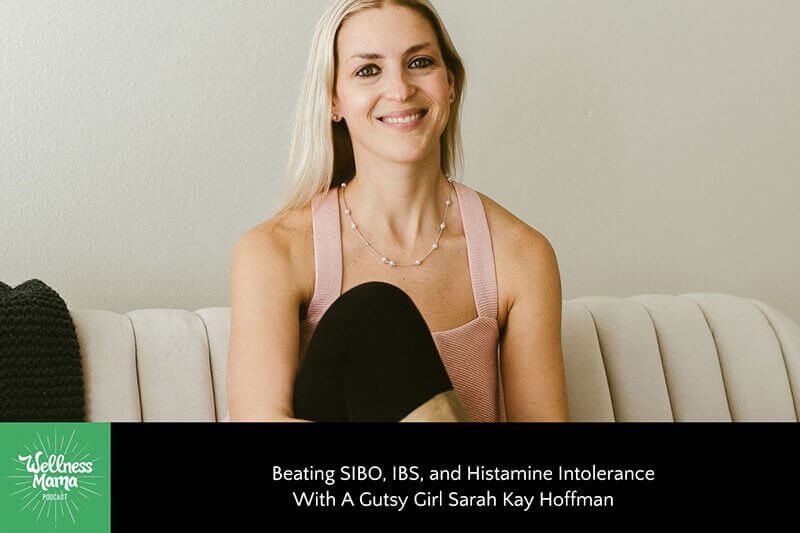 Sarah Kay Hoffman is the founder of A Gutsy Girl, a website I’ve been following for a long time. She’s created an amazing online community geared towards women who are looking for a reasonable approach for healing things like IBS, IBD, SIBO, hormonal problems, acne, and more. Sarah got her start when trying to heal her own health problems years ago. Now she’s a gut health researcher and journalist who speaks out highly detailed information and then condenses it into digestible ways for women worldwide.

Sarah is also a mom to three absolutely adorable children, so I’m sure we’ll talk all things motherhood today as well!

Did you enjoy this episode? What questions do you have about SIBO or other gut-related illnesses? Please drop a comment below or leave a review on iTunes to let us know. We value knowing what you think and this helps other moms find the podcast as well.

This episode is brought to you by Ritual Vitamins, which are specifically designed just for women. Ritual contains nine essential nutrients that most women don’t get enough of from just from food: vitamin B12 (as methylcobalamin), folate, vegan D3, vitamin K2, vitamin E, omega-3 fatty acids, boron, chelated iron and a proprietary form of magnesium. Ritual supplies them in forms that are easily absorbed and utilized, and all the capsules are vegan, gluten-free, allergen free and non-GMO. They have both a prenatal and a regular women multivitamin both designed specifically for women and synergistic for women hormones. Did you know that 40% of women can’t properly use folic acid due to an MTHFR gene variation? Ritual contains a natural form of folate and synergistic nutrients so the entire multi is more effective. In pregnancy especially, folate is vital… According to OBGYN Dr. Jason Rothbart, “most women don’t find out they are pregnant until around 4-7 weeks pregnant, which is past the first 28 days. In the first 28 days, the organs are rapidly forming. The neural tube (which becomes the central nervous system and vertebral column) is almost completely formed and closed by the end of 28 days.” The essential nutrient Folate helps promote healthy development neural tube.* This is why many doctors recommend taking a quality prenatal for several months before trying to get pregnant. Ritual makes it easy with both a prenatal and regular women multivitamin. Learn more about both at https://wellnessmama.com/go/ritual.

This episode is brought to you by Kettle and Fire bone broth and soups. I’ve used these products for years and always keep my pantry well stocked with their products. They have chicken, chicken mushroom and beef bone broths, which are great as a base for soups or even just sipped on their own, but they now also have tomato, butternut and miso soups which are often part of meals at our house. Their newest products, chili and thai chicken soup are whole meals on their own and make last minute dinner so easy at my house! Their broths are made from grass-fed and pastured animal bones and are a great source of collagen and amino acids like proline and glycine. I incorporate collagen in some form every day, and Kettle and Fire makes it tasty. Go to kettleandfire.com/wellnessmama and use coupon code WELLNESSMAMA20 for 20% off.

257: Jeffrey Smith on The Truth About GMOs & Secret Ingredients in Our Food
Next Post: 259: Idahosa Ness on How to Learn Any Language by Ear