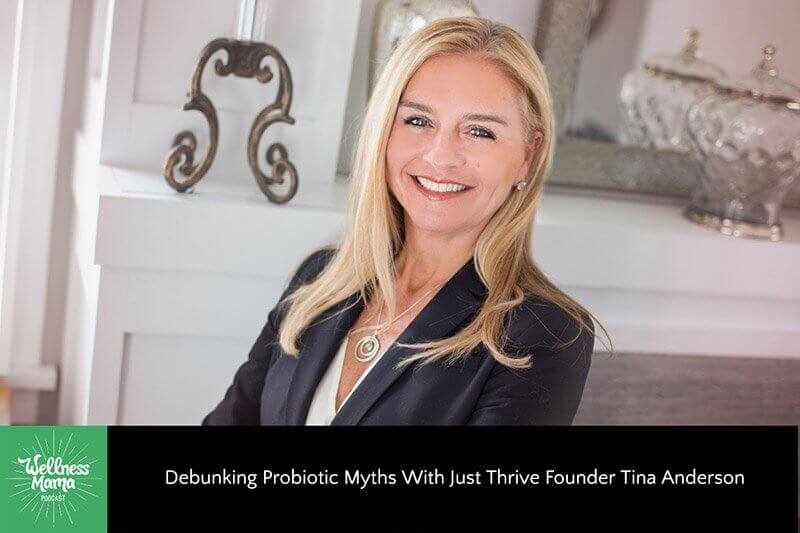 My job is basically a great excuse to sit down and chat with the people who inspire me most! Today is no exception as Tina Anderson, co-founder and CEO of Just Thrive probiotics, joins me on the podcast. We’re gonna jump into a lot of probiotic myths flying around and talk about the science behind this very important aspect of health.

Personal note on Tina: She has a fascinating background as a trial lawyer who then became in-house counsel for a pharmaceutical company. What she saw and learned launched her into a passionate career in the field of natural health.

To share her discovery with the world, she and her husband created a unique supplement that contains superior probiotic strains from renowned researcher Dr. Simon Cutting. I know you guys have been wanting me to talk about about this and I hope today’s episode answers all of your great questions!

Did you enjoy this episode? What other questions do you have about probiotics and gut health? Please drop a comment below or leave a review on iTunes to let us know. We value knowing what you think and this helps other moms find the podcast as well.

This podcast is brought to you by Butcher Box, a great source of high quality grass fed and pastured meats. This month, they’ve got a spectacular deal with their breakfast bundle. If you go to ButcherBox.com/wellnessmama you can Get $20 off your first box + 2lbs of Breakfast Pork Sausage and 2 packs of Bacon for FREE. This means that in every order you’ll get 2 pounds of breakfast sausage and 2 packs of bacon. Their bacon is uncured, free of sugar and nitrates, non-GMO verified, hormone free, made from pasture raised heritage breed pigs AND it’s whole30 approved! The breakfast sausage is made from pasture-raised heritage breed pigs. It’s simply seasoned with salt, pepper, and sage. No added sugar. A delightful, protein-rich way to start the day! I personally love getting their box each month and meal plan around it. My husband’s favorite is their steak and I love roasting their chicken for salads and soups. Go to butcherbox.com/wellnessmama to get $20 off + 2lbs of Breakfast Pork Sausage and 2 packs of Bacon for FREE in your first box!

This podcast is sponsored by Joovv. You’ve probably heard me talk about red light therapy before and the one I personally have in my home and use is the Joovv light. You may have seen red light therapy used on your face if you’ve ever gotten certain high end facial treatments at a spa or clinic. This is because red light in certain wavelengths has big benefits for the skin including the potential for smoother more elastic skin because it helps the body’s collagen process. Red light therapy is also known as photobiomodulation (PBM), low level light therapy (LLLT), biostimulation, photonic stimulation or light box therapy. These specific wavelengths of red light create a biochemical affect in our cells that serves to increase mitochondrial function and thereby improves ATP (adenosine triphosphate) production in the body. ATP = energy in the body so increasing it is a big deal. There is also some evidence that this can reduce inflammation which is why many people are turning to red light therapy for relief of joint pain as well. Joovv now has a smaller, convenient and affordable option called the Joovv Go that is perfect for use on the face or joints and is easy to travel with. Their bigger options are modular so you can buy just one or connect up to six for an entire red light wall. Check out the benefits of Red light therapy and learn more at joovv.com/wellnessmama