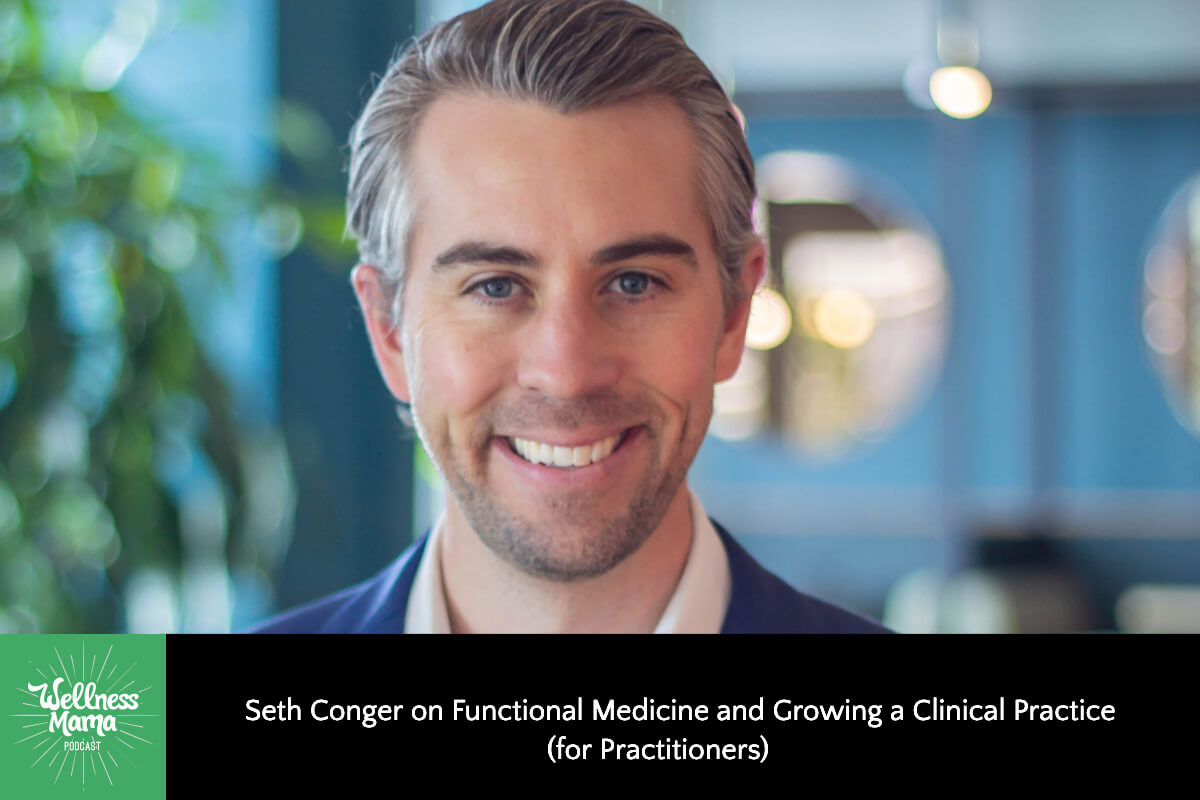 The Wellness Mama Podcast
460: Seth Conger on Functional Medicine and Growing a Clinical Practice (for Practitioners)

Today’s guest is going to be of special interest to any of you natural health or functional medicine practitioners out there, whether you’re already in practice or just thinking about getting into this field. Seth Conger has been a business leader and innovator in the functional medicine world since 2013. He’s helped bring several businesses to seven figures and beyond. He also created a cognitive decline and Alzheimer’s startup geared at helping people in those spaces.

Seth is now the COO of Freedom Practice Coaching, a company that helps practitioners reinvent and maximize business and client outcomes. We go deep into some practical tools practitioners can use to grow as entrepreneurs. We also talk a lot about functional medicine in general and the direction it should hopefully go over the next few decades. It’s a truly fascinating topic and I learned so much!

This podcast is sponsored by Joovv red light therapy. I’ve been a fan of red light therapy since researching it years ago, and have been really grateful for my red light devices the last couple of years as I get older and want to be proactive about keeping my skin looking young! With stress and travel, I felt my skin getting less smooth and elastic than it used to be, so I upped my red light use to help my skin feel its best! I also notice the benefits for recovery and sleep as I’ve gotten into more intense workouts. Light is such a vital part of the cellular energy equation in the body and red light therapy is an easy way to get this vital piece. Since many of us spend so much time indoors, we often don’t get enough light. Spending some time outdoors each morning and using red light at night are my go-to’s for making sure my body’s light exposure is optimized. Learn more and see the light I use at joovv.com/wellnessmama. And they’ve built in an exclusive Wellness Mama discount at above link!

This podcast is brought to you by Just Thrive, a company near and dear to my heart (and my gut). Gut health really is connected to everything, and in today’s world, we encounter a lot of things that tend to mess with our gut bacteria, from food to stress and even environmental toxins. The gut has been called the second brain with good reason. We learn more each day about it’s vital role in all aspects of health. Just Thrive probiotic is the first one I’ve seen and felt a noticeable difference from almost immediately, with their patented Bacillus Indicus HU36 strain that helps turn your gut into an antioxidant factory so it’s working all the time to benefit you. Since focusing on my gut and making these a regular part of my life, I’ve seen digestive and skin changes. Just Thrive probiotic is vegan, dairy free, histamine free, non-GMO, and is made without soy, sugar, salt, corn, nuts or gluten, so it’s safe for practically everyone… I even sprinkle it in my kids’ food and bake it into products since it can survive at up to 450 degrees! You want a probiotic that can survive in high temperature, otherwise it wouldn’t survive in the temperatures in your digestive system. I actually love all of their products and have been especially enjoying their prebiotic drink, which is absolutely delicious too! Check them out at justthrivehealth.com/wellnessmama and use the code wellnessmama15 to save 15% at checkout.

459: Suzanne Somers on a New Way to Age (Focused on Cellular Health)
Next Post: 461: Sam Thayer on Foraging and Wild Edibles for Health, Conservation, and Culinary Uses