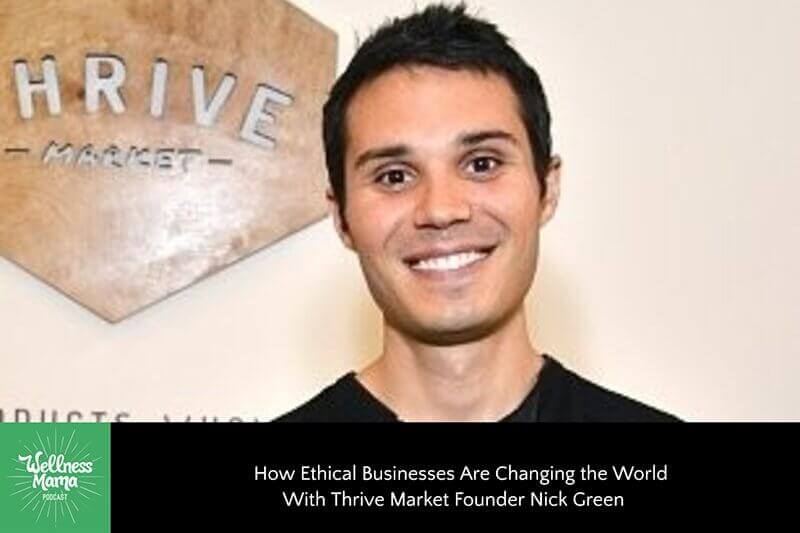 Wellness Mama » Podcast » 240: Nick Green on How Ethical Businesses Can Change the World

240: Nick Green on How Ethical Businesses Can Change the World

The Wellness Mama Podcast
240: Nick Green on How Ethical Businesses Can Change the World

Today I have the pleasure of talking to a friend and someone I highly respect to go deep on things like ethical business and how we can all help change the future for the next generation. I’m here with Nick Green, who is the co-founder and CEO of Thrive Market, which you all have heard me talk about plenty of times before. What you may not know is that in addition to making healthy food and sustainable products more accessible, Thrive Market (thanks in large part to Nick) makes it their mission to have a positive social impact in everything they do.

We’ll talk about Thrive Market’s giving initiatives, why they have such a deep dedication to helping families and communities, and how the creation of socially conscious companies has the power to transform our world for the better.

Did you enjoy this episode? What other questions do you have about Thrive Market? Please drop a comment below or leave a review on iTunes to let us know. We value knowing what you think and this helps other moms find the podcast as well.

This podcast is brought to you by Joovv red light therapy. I’ve written about red light therapy before and how it helps support the body and even reduce the signs of aging. My Joovv is part of my daily routine and I love this relaxing 20-minute ritual. I’m getting a mood boost while increasing my collagen and elastin production, improving fat metabolism, assisting with the body’s detoxification reactions, and boosting cellular energy. Here’s how it does all of that: Just like plants convert light energy into chemical energy via photosynthesis, our bodies have the ability to metabolize red and near-infrared light into a form of cellular energy — adenosine triphosphate (ATP) — that is essential to restoring, repairing, energizing, and maintaining our bodies. ATP is often referred to as the “energy currency of life,” which is why light therapy can be so nourishing, healing, and soothing all at the same time. I have and use a combination Joovv light which has two wavelengths for double the benefits, 660 nm for red light and 850 nm for near-infrared light. Both were chosen because the bulk of the scientific literature centers on their benefits, and you can get them separately or together. The 660nm range is better for collagen production and other skin benefits, while the 850 is better for deep tissue issues like muscle recovery, joint discomfort, etc. They now have a Joovv Go, a smaller, less expensive, and just as effective model that can even travel with you for a quick collagen boost for your face or inflammation relief in a sore joint. Learn more at joovv.com/wellnessmama

This podcast is brought to you by SteadyMD. This company combines the cutting edge of medical knowledge with the personal touch of concierge medicine. It is like having the best doctors in the country as your personal old-school come to your house doctor. Here’s what I mean- you are connected with a value aligned doctor who learns your medical history and your family’s medical history. You can connect any time you need via phone, text or video chat to ask questions and they can help with most issues and prescribe most things long distance. With technology, this is my favorite way to interact with a doctor now. We can order everything else from our phones and get everything delivered to our houses and now we can interact with our doctors in the same way. With a digital otoscope, I’ve even been able to literally send my doctor an instant video of my kid’s eardrum to see if she had an ear infection before. My doc understands that while I do think conventional medicine is life saving and important, I prefer to use natural remedies when possible and avoid antibiotics whenever possible. I can trust that he is never pushing a treatment that isn’t absolutely necessary. In fact, he’s given me natural remedy advice most of the time over suggesting medicine and shares my stance on not overusing antibiotics and pain medicine to reduce fever. Learn more at steadyMD.com/wellnessmama.