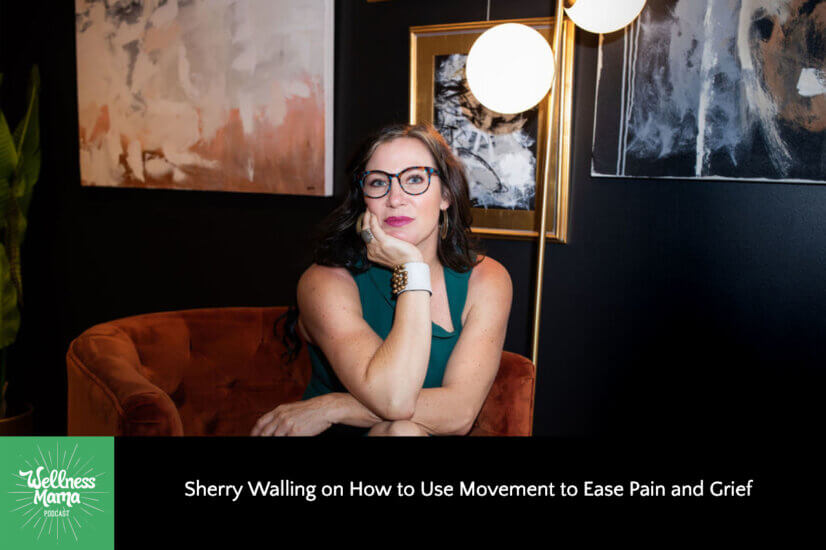 Wellness Mama » Podcast » 577: Sherry Walling on How to Use Movement to Ease Pain and Grief

577: Sherry Walling on How to Use Movement to Ease Pain and Grief

The Wellness Mama Podcast
577: Sherry Walling on How to Use Movement to Ease Pain and Grief

Dr. Sherry Walling is a psychologist, mental health advocate, and author. Her newest book, “Touching Two Worlds,” explores practical strategies for dealing with loss. We’ve all dealt with grief in some way (myself included!) and how we process it can make a big difference not just in our mental health, but our physical health.

Dr. Sherry shares how we can use movement to move feelings through our body and process them in a healthy way. As a mom, Sherry understands how important it is to help children work through these feelings too. I’ve found with my own kids, that something as common as a temper tantrum to release emotions can actually produce beneficial results (more details in this episode!).

I’ve seen so much benefit in using some of these strategies in my own life and I was excited to hear more about it from Dr. Sherry. So I hope you join us today as we dive deep into using movement to ease pain and grief.

This podcast is brought to you by Inside Tracker. I’m loving this because we now have access to more data about our health than we ever had. But sometimes it’s hard to know what to do with all the data. And that’s why Inside Tracker provides you with a personalized plan to build strength, speed, recovery, and optimize your health for the long haul based on your own data. It’s created by leading scientists in aging, genetics, and biometrics. And Inside Tracker analyzes your blood, your DNA, and your fitness tracking data to identify where you’re optimized and where you’re not. You get a daily action plan with personalized guidance on the right exercise, nutrition, and supplements for your body. And when you connect Inside Tracker with your Fitbit or your Garmin, you’ll also unlock real-time recovery pro tips after you complete a workout. It’s like having a personal trainer and a nutritionist in your pocket to interpret all that data and give you recommendations that are best for you. And for a limited time, you can get 20% off everything in the Inside Tracker store. Just go to Insidetracker.com/wellnessmama.

This episode is sponsored by Onnit… You know those times when you’re so into what you’re doing that you can’t think about anything else? The times when you’re at your most focused and productive? Psychologists call that feeling of being in the zone “flow state,” and Alpha BRAIN from Onnit is the ultimate way to get there. A world-renowned nootropic supplement with over one million bottles sold, Alpha BRAIN promotes cognitive functions, including memory, mental speed, and focus. It can help you remember names, zero in on complex tasks, and think more clearly under stress.

Alpha BRAIN contains amino acids and plant compounds that promote the brain’s release of alpha waves, which are associated with greater creativity and productivity. At the same time, it supports neurotransmitters, chemicals that relay information in and from the brain. If coffee and energy drinks make you jittery, you can rest easy knowing that Alpha BRAIN is caffeine-free. But, if for any reason you don’t like Alpha BRAIN, you can get your money back. Just give us two weeks. If at that point you don’t feel like Alpha BRAIN is a fit for you, just tell us why, and we’ll refund your money on the spot—no return necessary. Right now you can save up to 30% off when you go to onnit.com/wellnessmama

576: Todd Kashdan on The Art of Insubordination: How (and Why) to Dissent and Defy Effectively
Next Post:578: Michelle Aristizabal on Natural Birth and Choosing Your Birthing Experience