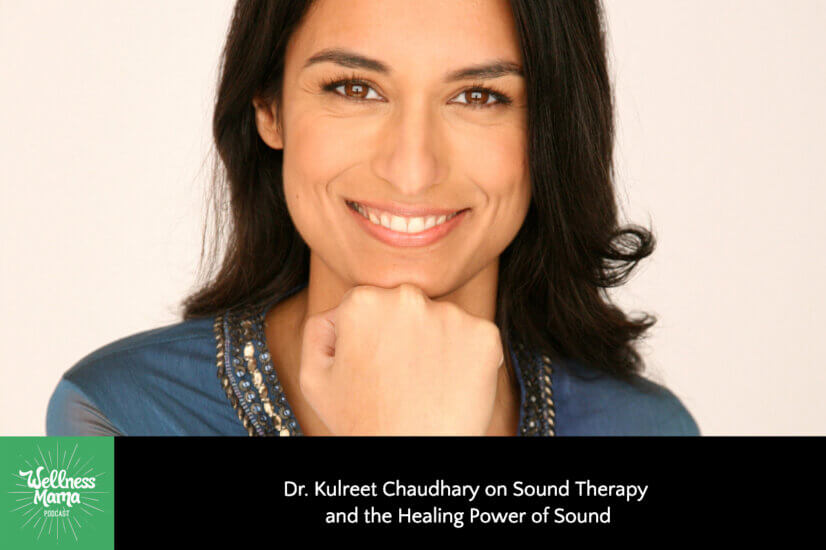 572: Dr. Kulreet Chaudhary on Sound Therapy and the Healing Power of Sound

The Wellness Mama Podcast
572: Dr. Kulreet Chaudhary on Sound Therapy and the Healing Power of Sound

Today I get to talk with Dr. Kulreet Chaudhary about how she’s used sound for decades in her own life with amazing results and how she shares this healing power with others. You’ve heard me talk about light therapy before and how important morning sunlight is every day (plus it’s free!). Sound therapy is another profound therapy that’s accessible to all of us.

Dr. Kulreet is a neurologist and neuroscientist who has developed a system to successfully manage chronic neurological disorders like MS and Parkinson’s. Sound therapy can be used every day though to help move us to a state of rest and calm or as a tool to release trauma. And moms of little ones, the mantras Dr. Kulreet shares can even help young children sleep better.

Releasing past trauma was a big key for me in my health journey and sound therapy is one major way to do that. So if you’re ready to get your mind in a positive state and have more peace in your life, then check out today’s podcast and shared resources!

This episode is brought to you by Just Thrive Health, one of my top sources for supplements. I’ve seen firsthand how incredible their products are and today I’m sharing the three I use most. The first is their spore-based probiotic. Unlike many probiotics, this one is shelf stable, doesn’t have to be refrigerated, and survives all the way through the digestive system so it gets exactly where it needs to go. Because they are heat stable, I can also add these to smoothies, soups, and even baked goods for my younger kids and these are the only probiotics I’ve seen a noticeable difference from using. They also have a product called IGG that helps calm the immune system and that was very helpful to me personally when I was working on recovering from my autoimmune conditions. Lastly, their new Just Calm product has been great when I’m going through some stressful times lately. It contains a proprietary “psychobiotic” strain known as BL 1714™. Psychobiotics are a new class of products with beneficial bacteria that can support your mood, cognition, and emotional health. Check out these and all of their products at justthrivehealth.com/wellnessmama and use the code wellnessmama15 to save 15%.

This podcast is sponsored by BiOptimizers Magnesium Breakthrough. Did you know that when you are stressed, your magnesium levels become depleted, which can, in turn, increase your stress more, which triggers a depletion in your magnesium even more. It’s a vicious cycle. And since 75% plus of the population is deficient in magnesium, chances are you are suffering from this cycle too.
Being stressed, losing sleep, and not feeling rested takes away valuable time and attention from my work and my family. And that’s not something I’m okay with. Which is why I consistently take Magnesium Breakthrough by BiOptimizers. It’s the only organic full spectrum magnesium supplement that includes seven unique forms of magnesium. So if you ever feel stressed, have trouble falling asleep, or staying asleep, or don’t feel fully rested, one easy step you can take is to get more magnesium. But don’t run to the store and just buy the first magnesium you find.
Most supplements only use the two cheapest synthetic forms that don’t work as well. And since they’re not full spectrum, they won’t fully address magnesium deficiency or help you sleep. There are actually seven unique forms of magnesium. And for best results, you need all of them. And that’s why I recommend this particular one. You can just take two capsules before you go to bed at night, and you’ll be amazed at the effects on your sleep, and your stress, and how much more rested you feel.
There’s an exclusive offer just for you at magbreakthrough.com/wellnessmama with the code WellnessMama to save 10% when you try it.

571: Mimi Bouchard on What It Really Takes to Transform Your Health, Career + Life
Next Post:573: Nadine Artemis on Natural Oral Health and the Power of Sunshine