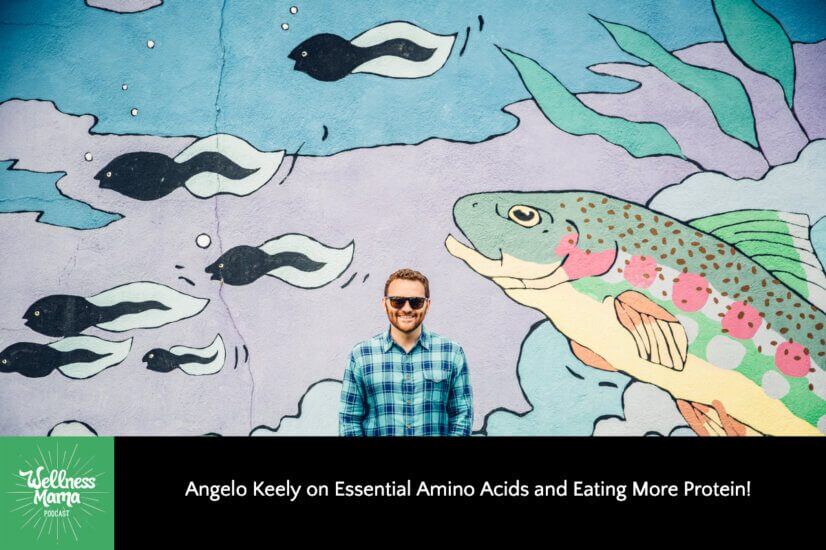 I’m here with repeat guest Angelo Keely, who is the co-founder and CEO of Kion and this episode is all about essential amino acids and how to know if you’re eating enough protein. I’ve mentioned on social media how I take essential amino acids as well as creatine when I strength train and Angelo is the ideal guest to dive deep into this with you all. I’ve received a good amount of questions about aminos and I wanted to share his knowledge and expertise with all of you.

But even if you don’t have strength training goals, aminos can have a really, really important impact for long-term health because they support lean muscle mass, which is correlated to longevity, and to a lot of other positive outcomes as we age. We get pretty in-depth in this episode and we talk about what essential amino acids are, why they are so important, the difference between essential and non-essential amino acids, understanding protein synthesis in the body, and the core reason you should be eating more protein. This is something I’ve been incorporating into my daily routine and I’ve noticed some really good results.

It was a fact-packed episode and we talked about how to optimally time and supplement, and all those caveats, who can take it, when you should take it, etc. I know you will enjoy this episode as much as I did!

This episode is brought to you by Just Thrive Health, one of my top sources for supplements. I’ve seen first hand how incredible their products are and today I’m sharing the three I use most. The first is their spore-based probiotic. Unlike many probiotics, this one is shelf stable, doesn’t have to be refrigerated, and survives all the way through the digestive system so it gets exactly where it needs to go. Because they are heat stable, I can also add these to smoothies, soups and even baked goods for my younger kids and these are the only probiotics I’ve seen a noticeable difference from using. They also have a product called IGG that helps calm the immune system and that was very helpful to me personally when I was working on recovering from my autoimmune conditions. Lastly, their new Just Calm product has been great when I’m going through some stressful times lately. It contains a proprietary “psychobiotic” strain known as BL 1714™. Psychobiotics are a new class of products with beneficial bacteria that can support your mood, cognition, and emotional health. Check out these and all of their products at justthrivehealth.com/wellnessmama and use the code wellnessmama15 to save 15%

This podcast is sponsored by Wellnesse… that’s wellness with an e on the end, my new personal care line of haircare, oral care and deodorant. Our newest product that I’m so excited about is our all-natural deodorant that works better than conventional alternatives, without the harmful chemicals or pore-clogging junk. Unlike many natural brands, it uses the right balance of natural odor blockers so that you get the protection you want without any irritation or itching. Formulated with only EWG safe ingredients and EWG and B-corp certified, it’s a safe, natural and effective solution for the whole family. Check out these and all of our amazing products at wellnesse.com.

560: Dr. Molly Maloof on Hormones, Trauma Recovery, Healthspan and the Science of Love
Next Post: 562: Dr. Chad Walding on Collagen, Protein Consumption and Staying “On the Path”