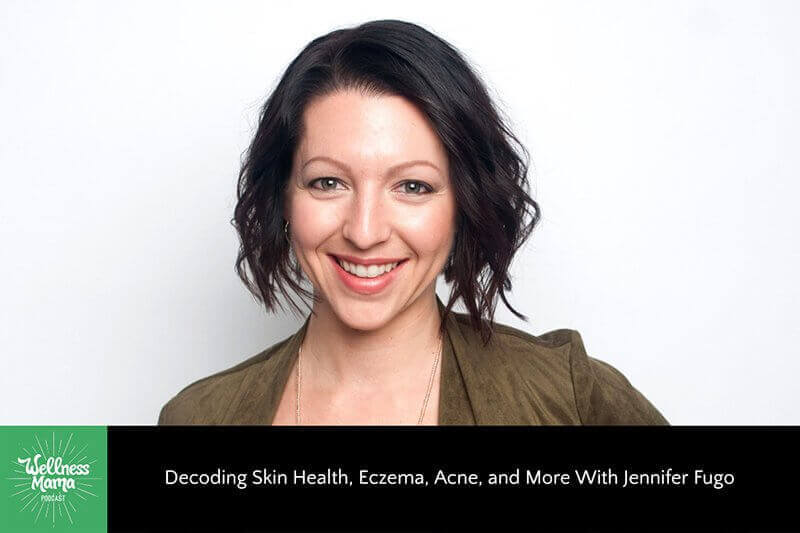 Jennifer Fugo is a clinical nutritionist empowering women who have been failed by conventional medicine and are trying to beat chronic skin and unending gut challenges. And she’s well equipped to do it. Jennifer has a master’s degree in human nutrition from the University of Bridgeport and is a certified nutrition specialist. Her work has been featured on Dr. Oz, Reuters, Yahoo, CNN, and all over the Internet. She’s also an Amazon best-selling author and the host of her own podcast, The Healthy Skin Show.

On top of all that, Jennifer brings plenty of empathy to the table since she overcame her own long history of gut issues and eczema. This gives her the insight to really help dig in and create integrative plans for healing. As part of her mission to help women like herself, Jennifer founded Skinterrupt.com to interrupt the failed conversation about chronic skin problems with helpful alternatives that you aren’t being told by many doctors and practitioners.

Do you struggle with a skin condition? Can I pass some questions on to Jennifer for a part two? Please drop a comment below or leave a review on iTunes to let us know. We value knowing what you think and this helps other moms find the podcast as well.

This podcast is sponsored by Joovv. You’ve probably heard me talk about red light therapy before and the one I personally have in my home and use is the Joovv light. You may have seen red light therapy used on your face if you’ve ever gotten certain high end facial treatments at a spa or clinic…. This is because red light in certain wavelengths has big benefits for the skin including the potential for smoother more elastic skin because it helps the body’s collagen process. Red light therapy is also known as photobiomodulation (PBM), low level light therapy (LLLT), biostimulation, photonic stimulation or light box therapy. These specific wavelengths of red light create a biochemical affect in our cells that serves to increase mitochondrial function and thereby improves ATP (adenosine triphosphate) production in the body. ATP = energy in the body so increasing it is a big deal. There is also some evidence that this can reduce inflammation which is why many people are turning to red light therapy for relief of joint pain as well. Joovv now has a smaller, convenient and affordable option called the Joovv go that is perfect for use on the face or joints and is easy to travel with. Their bigger options are modular so you can buy just one or connect up to six for an entire red light wall. Check out the benefits of Red light therapy and learn more at joovv.com/wellnessmama.

This podcast is brought to you by Butcher Box, a great source for grass fed, pastured and organic meats including chicken, beef and pork. ButcherBox delivers healthy 100% grass-fed and finished beef, free-range organic chicken, and Heritage breed pork directly to your door on a monthly basis. All their products are humanely raised and NEVER EVER given antibiotics or hormones. It’s hard to find high quality meat you can trust. ButcherBox is changing that. And they offer FREE SHIPPING anywhere in the 48 States. This month, they’ve created a special offer just for listeners of this podcast. Go to ButcherBox.com/wellnessmama to get $20 off… plus a special mystery offer! this is the biggest deal of the year, I can’t even tell you what it is… What I can tell you is that I love getting my butcher box each month and when it arrives I create my meal plan around it. This way, I just grab a bunch of fresh veggies at our farmers market each week and making healthy meals is a breeze. Make sure to lock in your mystery deal and save $20 on your first box. Go to butcherbox.com/wellnessmama to get $20 off your first box + Mystery special