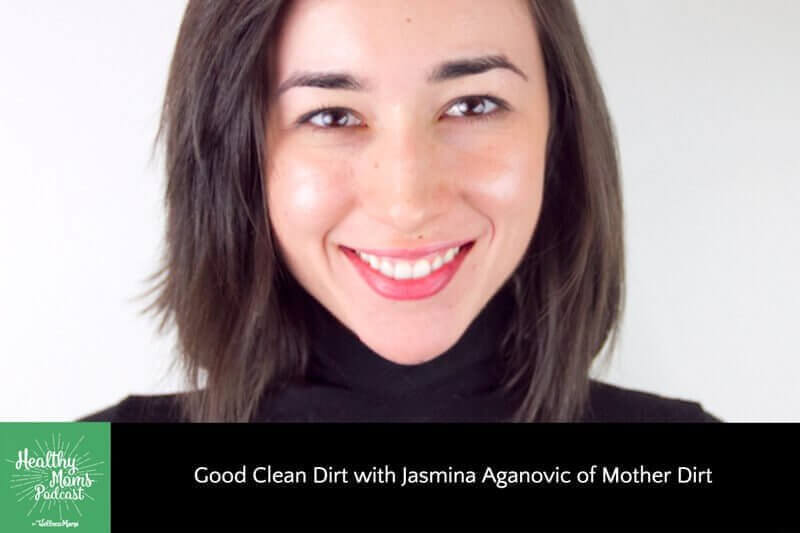 Don’t be afraid of a little good, clean dirt.

You all know I’m a big fan of letting kids play outside as much as possible, and even better if they’re barefoot and digging in the mud! I’m happy to have an MIT-educated chemical and biological engineer like Jasmina on my side. In this podcast episode, she explains why playing in the dirt benefits kids (and all of us) so much, and why we don’t need to be as clean as we think we do.

The connection between healthy gut flora and good health has gotten a lot of press in the natural health world in recent years. But more and more researchers like Jasmina suspect that just as a bacterial gut imbalance can lead to disease and poor health, a bacterial imbalance on your skin can also have deeper health effects.

While we still have a lot to learn about the complex bacteria found in our bodies, here’s what she and other researchers on the pioneering edge of microbiome research have found:

We as a society are keeping things too clean.

In fact, when we wash too frequently or with the wrong products, we can actually wipe away good, protective, necessary bacteria from our skin.

And this problem has gotten significantly worse in recent decades.

The Rise of Antibacterial Products

It all started out unintentionally enough, Jasmina explains, in hospitals—a fitting place for antibacterial products.

Companies soon caught on. Antibacterial cleaning products became available in homes and schools across the nation. And we as a society started to see killing “99.99% of bacteria” as a good thing, when in reality only a single-digit percentage of all bacteria is actually harmful.

Basically, outside of a hospital setting or a superbug epidemic, we need to leave well enough alone and let our skin do what it was meant to do. In most cases, plain old fashioned soap will do, as Jasmina, the Mother Dirt company, and recently even the FDA remind us.

The Decline of Dirt (Or, What’s Dirt Got to Do with It?)

Okay, so maybe we’re thinking about easing off the hand sanitizer, but do we really have to get … dirty?

Yes! Yes, the answer actually lies in dirt … as in soil.

Ammonia-Oxidizing-Bacteria (AOB), also known as “Nitrifying Bacteria,” are microorganisms that consume ammonia for energy and are present wherever a nitrogen cycle is taking place….

AOBs are found everywhere in nature…. If you’ve ever walked barefoot on dirt, swam in a lake or the ocean, you probably emerged refreshed and covered with AOBs.

Modern living makes it too easy for us to be inside, away from the beneficial bacteria found in the great outdoors. We wake up in our houses, drive in our cars to work or school, and spend much of the day in semi-sterile environments treated with antibacterial products.

This has weakened our skin biomes, and according to experts like Jasmina, they need to be restored.

Mother Dirt products actually contain live AOBs and add them back onto your skin where they act as a kind of “peacemaker” between good and bad bacteria.

With the living power of AOBs (and the absence of preservatives and harsh cleansers), these products can:

All this leads to healthier skin, fewer breakouts, and a decrease in skin issues … all while using fewer products!

Here are just some of Jasmina’s practical steps toward a healthy skin biome you can start putting into practice in your family today:

But don’t take my word for it … tune in and hear what the expert has to say!

This podcast is brought to you by Kettle and Fire Bone Broth. If you love the benefits of bone broth but want an easier way to make it, Kettle and Fire is for you! They have the first grass-fed (and grass-finished) non-perishable bone broth and it is ah-mazing! You can find them in many Whole Foods on the west coast and you can also order online from here.

I use their bone broth regularly these days and used it to create the recipes in my new bone broth e-book (releasing later this year).

This podcast is also brought to you by Thrive Market. If you live in a real food desert like I do, it can be difficult to find certain organic foods, speciality foods, or allergy-friendly foods. Thrive Market is my solution to this problem. They carry thousands of the non-perishable foods that I use most often at discount prices.

I think of them as a combination of Costco, Amazon, and Whole Foods. They are online like Amazon, have a yearly membership fee to unlock discounts like Costco, and carry high quality foods like Whole Foods!

061: Maneesh Sethi on Using the Pavlok To Change Habits
Next Post: 063: Todd White on How to Choose Healthy Wine