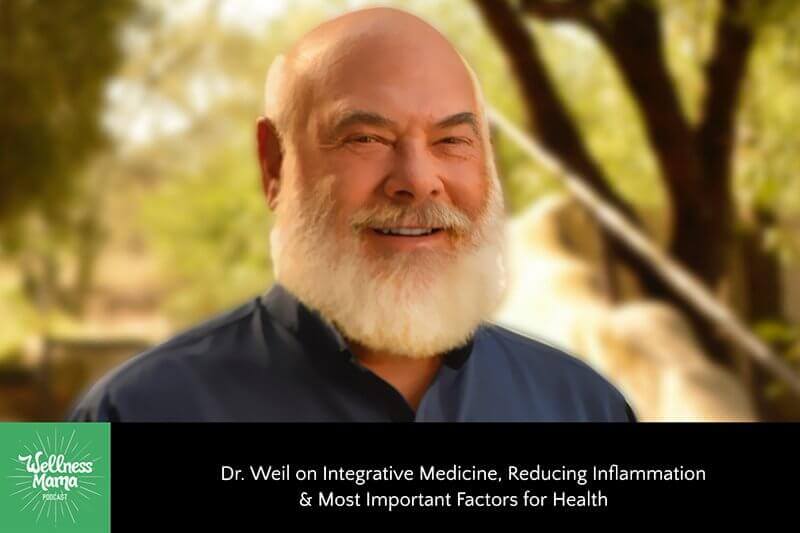 Wellness Mama » Podcast » 262: Dr. Andrew Weil on the Most Important Factors for Health

The Wellness Mama Podcast
262: Dr. Andrew Weil on the Most Important Factors for Health

I’m sure you all know Dr. Andrew Weil, a true pioneer of integrative medicine in the last few decades. Today Dr. Weil shares what he’s learned along the way during his impressive career. Although his list of accomplishments is almost to long to mention, I’ll start with this: Dr. Weil, MD, is a world-renowned leader in the field of integrative medicine who combined a Harvard education with a lifetime of practicing natural and preventative medicine. He’s also the founder and director of the Andrew Weil Center for Integrative Medicine at the University of Arizona in Tucson, where he serves as Clinical Professor of Medicine and Professor of Public Health, and also as the Lovell-Jones Professor of Integrative Rheumatology.

If that’s not enough, Dr. Weil also wrote 15 best-selling books on healthy living topics and founded an amazing restaurant you may have heard of, True Foods Kitchen. I think it’s safe to say he has more experience than almost anyone else in the industry. Sit tight for some interesting gems of advice in this episode, including what Dr. Weil thinks is next for integrative medicine and staying healthy in a fast-changing world.

Did you enjoy this episode? What would you ask Dr. Weil? Please drop a comment below or leave a review on iTunes to let us know. We value knowing what you think and this helps other moms find the podcast as well.

This podcast is brought to you by Pelvic Pain Relief, created by my good friend Isa Herrera. Did you know that while it may be the norm for many women, it isn’t necessary to suffer from pelvic pain, or to leak urine when you laugh, cough, sneeze or jump? I’ve learned so much from Isa, including some super simple and quick stretches that can help stop this leaking unjust 30 seconds. She also explains why kegels can sometimes make pelvic pain worse, how to know if this is the case and what to do instead. She’s helped thousands of women find relief and freedom and if you’ve ever struggled with pelvic issues, I’m guessing she can help you too. She has an amazing free masterclass and has opened up some free spots just for listeners of this podcast. Claim your spot now at pelvicpainrelief.com/healing

This podcast is brought to you by Magic Spoon Cereal. I know, I know… never thought you’d hear me recommend cereal, did you? That’s because almost every cereal out there is full of refined sugars and grains and often GMO ingredients and dyes. Yet, Americans certainly love it! In fact, the average American consumes 100+ bowls a year, and that number accounts for people like me who don’t consume any at all! Now, cereal lovers can rejoice that there is a high protein, low carb, grain-free, gluten-free, nothing artificial, childlike cereal for grown-ups. With 12 grams of protein per bowl and only 3 grams of carbs it tastes like the cereal you remember but without the sugar high or the guilt! Check out magicspoon.com/wellnessmama for all the details.

261: Chrissa Benson on Practical Tips and Mom Hacks
Next Post: 263: Sheri Salata on The Beautiful No & Other Life Lessons