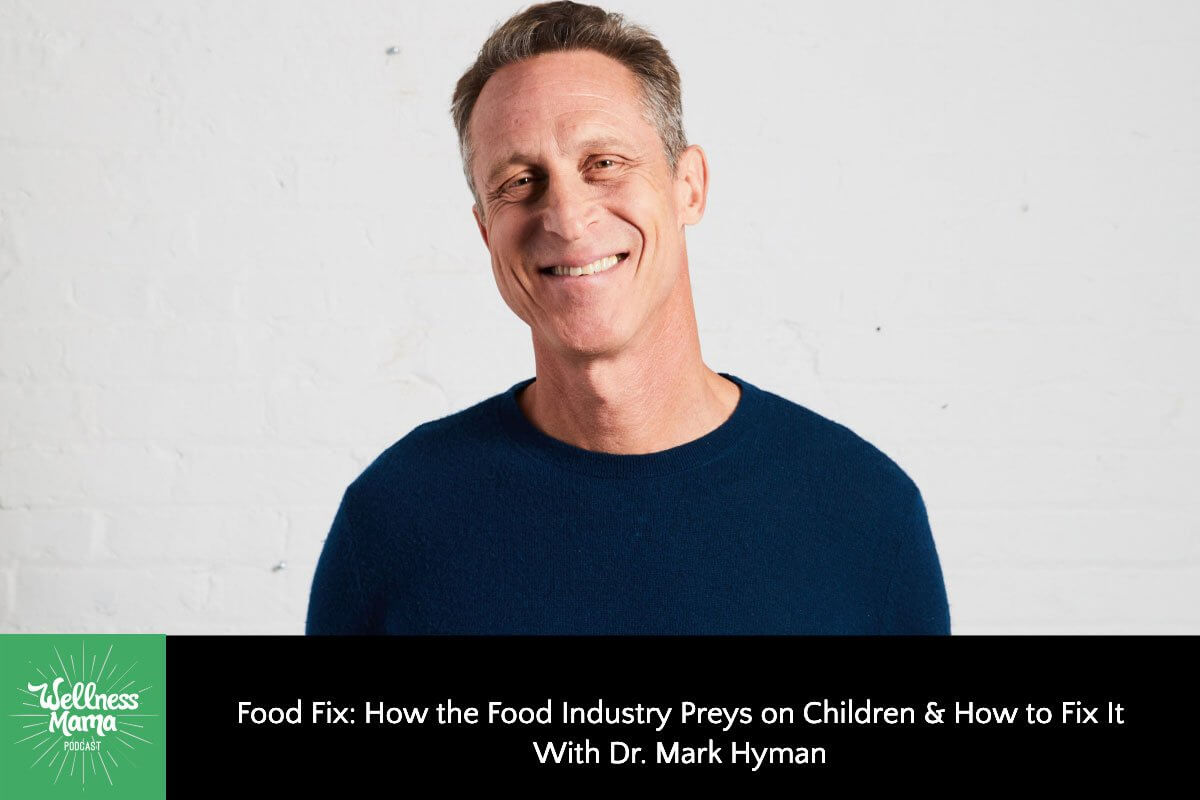 Wellness Mama » Podcast » 335: How the Food Industry Preys on Children & How to Fix It (With Dr. Mark Hyman)

The Wellness Mama Podcast
335: How the Food Industry Preys on Children & How to Fix It (With Dr. Mark Hyman)

Dr. Mark Hyman is one of the most celebrated and widely recognized health leaders today. He’s back on the podcast today to talk about how the food industry is targeting our children, and what we can do as moms to fight back. From school lunches to what we put on the dinner table, there are simple strategies that can help protect our kids and change the future of food.

He may not need an introduction, but his accomplishments are too impressive to skip! Dr. Mark Hyman is a practicing family physician and an internationally recognized leader, speaker, educator, and advocate in the field of Functional Medicine. He is the founder and director of The UltraWellness Center, the Head of Strategy and Innovation of the Cleveland Clinic Center for Functional Medicine, a thirteen-time New York Times best-selling author, and Board President for Clinical Affairs for The Institute for Functional Medicine. He hosts a leading health podcast, The Doctor’s Farmacy, and has appeared on CBS This Morning, Today, Good Morning America, The View, Dr. Oz, and CNN.

Did you enjoy this episode? What would you ask Dr. Hyman? Please drop a comment below or leave a review on iTunes to let us know. We value knowing what you think and this helps other moms find the podcast as well.

This podcast is sponsored by Four Sigmatic, my source for superfood mushroom products that are a big part of my daily routine. In fact, about 80% of the dirt under your feet is actually mycelium or mushrooms. And mushrooms have a wide variety of health benefits, everything from immune support, and improved sleep, and they’re also a great source of B vitamins, and vitamin D. Mushrooms are considered anti-inflammatory due to a compound called ergothioneine and are considered safe and beneficial to consume regularly. In my house, we often start the day with Four Sigmatic’s Mushroom Coffee with Lion’s Mane and Chaga. It tastes just like regular coffee without as much caffeine and no jitters. The Lion’s Mane and Chaga help with energy and focus, like I said, without the jitters, or the acidity of a lot of coffee. I sip other products of theirs throughout the day, like their Chaga or Cordyceps or Lion’s Mane Elixirs, and I often wind down at night with their Reishi Elixir or Reishi Cacao, and I notice a measurable difference in my sleep when I do that. As a listener of this podcast, you can save on all Four Sigmatic products by going to foursigmatic.com/wellnessmama and using the code “wellnessmama” to save 15%.

This episode is brought to you by Wellnesse. That’s Wellnesse with an E on the end, which is my new personal care company that is dedicated to making safe and effective products from my family to your family. We started with toothpaste and hair care because these are the biggest offenders in most bathrooms, and we’re coming after the other personal care products as well. Did you know for instance that most shampoo contains harsh detergents that strip out the natural oils from the hair and leave it harder to manage over time and more dependent on extra products? We took a different approach, creating a nourishing hair food that gives your hair what it actually needs and doesn’t take away from its natural strength and beauty. In fact, it’s specifically designed to support your hair’s natural texture, natural color, and is safe for color-treated hair as well. Our shampoos contain herbs like nettle, which helps strengthen hair and reduce hair fall, leaving your hair and scalp healthier over time, and scented only with natural essential oils in a very delicate scent so that you don’t have to worry about the fragrance as well. Over time, your hair gets back to its stronger, healthier, shinier state without the need for parabens or silicone or SLS. You can check it out along with our whitening toothpaste and our full hair care bundles at wellnesse.com, that’s wellnesse.com. An insider tip, grab an essentials bundle or try auto-ship and you will lock in a discount.

334: Why We Need Salt (& How Much) With Robb Wolf
Next Post:336: How to Grow Sprouts in Your Kitchen for Nutritious and Inexpensive Food With Doug Evans