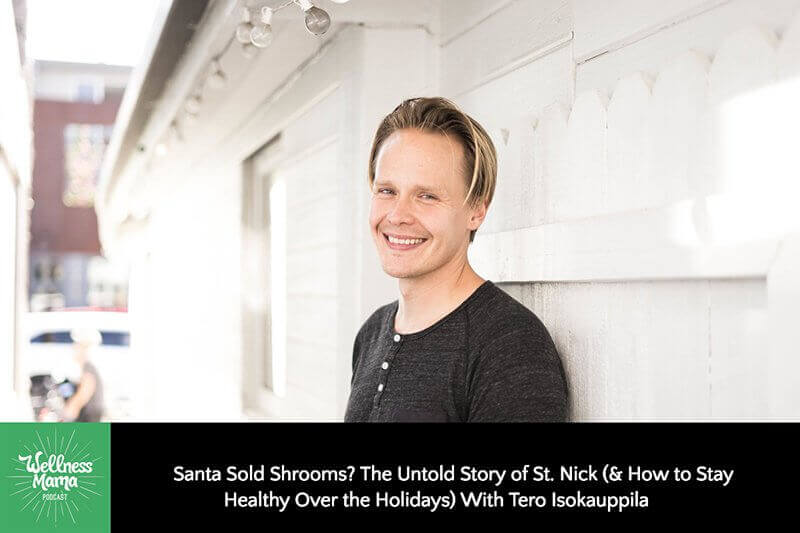 Tero Isokauppila is the founder and President of Four Sigmatic, a natural superfoods company specializing in mushroom-based drink powders. I’ve interviewed him before about the many benefits of medicinal mushrooms like chaga, cordyceps, lion’s mane, and reishi. Today I get to talk to him again about a different type of mushroom and the legend surrounding it, especially relating to the Finish interpretation of the story of Santa.

Tero grew up in Finland on a family farm where his relatives had been farming and foraging for generations. We delve into this fascinating story of Christmas from another culture and also ways to stay healthy over the holidays.

Have you ever heard this Santa story before? What other traditions do you celebrate? Please drop a comment below or leave a review on iTunes to let us know. We value knowing what you think and this helps other moms find the podcast as well.

This podcast is brought to you by Spar, a cool new app I found that lets you gamify behavior change to make you more likely to stick to it and here’s what I mean. You download the app for free and create an account then you can join or create a challenge to help you do anything from going for a walk every day, doing 20 push-ups each day or even reading for a certain amount of time each day. To make it fun, you can challenge friends to join you and you check in each day via video to prove that you did it. If you miss a day of the challenge you get charged a penalty and the winner takes the whole pot so you can actually win some serious cash while getting better at a habit you want to get better at anyway. People are using this from anything from flossing their teeth to reading each day or exercising or going to bed by 10pm. If you want to check it out, just download the Spar app from the App store and jump in.

This podcast is also brought to you by Good Culture. Good Culture makes amazing cottage cheese. I know, I know, not necessarily two words you would put in the same sentence on everyday speaking. But theirs is awesome, I promise, even if you don’t love cottage cheese. Basically, it’s naturally fermented cottage cheese so it’s free of gums, fillers, and additives and it’s packed with probiotics. And because it’s made naturally it doesn’t have that weird mouth feel that a lot of cottage cheese has. So, I use it all the time in cooking and smoothies as a substitute for other types of cheese, or just a meal on the go. You can find it at Whole Foods and many other grocery stores and it comes in yogurt-sized cups too, and those are perfect for meals. Check them out. It’s Good Culture and they are available at many grocery stores.

206: Jen Lumanlan on Why We Should Let Kids Take More Risks
Next Post: 208: Marjory Wildcraft on Understanding Superbugs & Antibiotic Resistance