Oil pulling is an age-old remedy rooted in Ayurvedic medicine that uses natural substances to clean and detoxify teeth and gums. It can also help whiten teeth naturally and evidence even shows that it may be beneficial for gum health. Using certain oils may help fight harmful bacteria in the mouth!

What is Oil Pulling?

Short answer: Oil pulling is the act of swishing oil (usually Sesame, Sunflower or Coconut) in the mouth for up to 20 minutes to improve oral health.

The basic idea is that oil is swished in the mouth for a short time each day and that this action helps improve oral health. Just as with oil cleansing for the skin, the principle of “like dissolves like” applies, as oil is able to cut through plaque and remove toxins without disturbing the teeth or gums.

The practice of oil pulling (also called gundusha) started in India thousands of years ago, and from my research, was first introduced to the United States in the early 1990s by a medical doctor named Dr. F. Karach, who used it with success in his medical practice.

Oil pulling seems to be a practice with a plethora of anecdotal support but a lack of extensive scientific studies (though there are some… see below). Most sources do agree that oil pulling is safe, but debate how effective it is. Though more research is needed to determine any scientific backing to oil pulling, I’ve noticed the benefits personally and dozens of readers swear by its effectiveness as well.

In fact, in my original research, I found hundreds of testimonials online from people who experienced benefits from oil pulling, including help with skin conditions, arthritis, asthma, headaches, hormone imbalances, infections, liver problems and more.

Though I’ve done this for a few years, my only personal experience is with increased oral health (no plaque) and less sensitive (and whiter!) teeth. I’ve heard several experts explain how bacteria and infection can enter the blood through the mouth, it does make sense that addressing these infections could have an impact in other parts of the body, I just haven’t had personal experience with this.

At the very least, I think that oil pulling can be very beneficial and has no downside as long as a quality oil (that is high enough quality to eat) is used and it is done correctly. Oil pulling is a very inexpensive therapy that could potentially have great benefit on oral health, so I see no downside to trying it and I have used it myself for several years.

How to Oil Pull

The concept is incredibly simple. Basically, a person swishes a couple teaspoons of a vegetable based oil (coconut, sesame or olive) in the mouth for 20 minutes and then spits it out and rinses well. Oil pulling is best done in the morning, before eating or drinking anything, though Dr. Bruce Fife suggests that it can be done before each meal if needed for more severe infections or dental problems.

This can also be done with coconut oil, which is naturally antibacterial and has a milder taste that other oils. Anyone with a sensitivity to coconut oil or coconut products should avoid using coconut oil in this way. Sesame oil was traditionally used in the Ayurvedic tradition and is another great option, just make sure to use an organic sesame oil.

Thankfully, this is one point that all sources seem to agree on! Some sources claim that oil pulling  doesn’t have the benefits often attributed to it or that it doesn’t actually detoxify the mouth, but all of them agree that it shouldn’t hurt anything.

All of the oils that are often used are completely edible and considered to be healthy when eaten, so they aren’t problematic when swished in the mouth. The only potential danger I’ve seen is if the oil is swallowed after it has absorbed any bacteria or toxins from the mouth.

When I asked my own dentist about oil pulling, I was told that while the research is lacking, it could be considered an effective and safe alternative to mouthwash and that there shouldn’t be any harm to trying it.

What Oil Should Be Used for Pulling?

If the goal is whitening the teeth, I’ve found coconut oil to be most effective (especially when combined with this unusual remedy). Coconut oil is also slightly more effective at removing certain bacteria from the mouth, including the Streptococcus mutans bacteria that is known for causing dental caries (source).

Sesame oil is recommended by most sources (though this is partially because it was one of the more widely available oils when the practice first started years ago) and it is also the most well studied and considered safe for those who are not allergic to sesame seeds. Olive oil is sometimes used, though some sources claim that it is too harsh for the teeth. The main thing is to avoid using any high Omega-6 or chemically created oils like vegetable oil, canola oil, soybean oil, corn oil, etc.

Who Can Do Oil Pulling?

Children: Several practitioners I’ve asked about this said that oil pulling is safe for kids once they are old enough not to swallow the oil.

Pregnancy: I’ve done oil pulling during pregnancy but I was also doing it regularly before I got pregnant. I asked a midwife and she said that it is generally considered safe for pregnant women, especially after the first trimester. Oral health is especially important during pregnancy so I’ve always been glad to have an extra way to keep my teeth and gums healthy while pregnant and just consider it like brushing or using mouthwash. (Purely anecdotal- I haven’t had a cavity, even while pregnant, since I started oil pulling and my oral health routine). As with anything, check with a doctor or midwife before doing oil pulling, especially if pregnant.

Nursing: Generally considered safe but check with a dentist or doctor to be safe.

Dental Issues: I got the ok to do this from my dentist and doctor with several (non-amalgam) fillings in my mouth but I’d check with a doctor or dentist to be sure, especially if you have any metal fillings, crowns, or dental problems.

Note: Some people supposedly notice a detox reaction for the first few days of using oil pulling that usually includes mild congestion, headache, mucous drainage or other effects. I personally didn’t notice any of these effects, but have read cases of others who did. 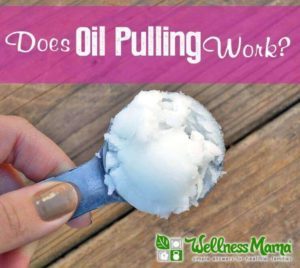 My only personal experience is with the oral health benefits, and I continue doing it for this reason, but there is evidence that it might help with other conditions as well. The most comprehensive resource I’ve seen on the topic is the book “Oil Pulling Therapy” by Dr. Bruce Fife.

Though the research is limited, there are some scientific studies that support the benefits of oil pulling, including those showing its benefit on different types or oral bacteria, on dental caries, on plaque/gingivitis and on oral micro-organisms:

There are several questions that are repeatedly asked in the comments, so I’ve compiled them here, along with the most common answers and any research I could find:

It may, but more research is needed. I talked about my personal experience with remineralizing my teeth here, and I did use oil pulling as part of this protocol, but I suspect that the benefit may be from the ability of certain oils to combat the bacteria that causes tooth decay, rather than actual mineral support for the tooth.

Coconut and sesame oils are not excellent sources of the minerals that teeth need, so using them in the mouth wouldn’t be a very effective way to provide minerals for the teeth. Since the mouth is constantly protecting and replenishing the minerals in teeth and enamel through saliva, it seems much more important to make sure the body is getting enough minerals internally so that they are available in saliva.

I couldn’t find any research related to the safety of oil pulling with fillings. Check with a dentist to see if this would be appropriate for your particular dental situation.

Can I Swallow the Oil? Or Where Should I Spit?

Please do not swallow the oil after oil pulling. It may contain bacteria, dead skin or other residue from the mouth and the whole purpose of oil pulling is to remove these things from the body. Especially with coconut oil, it is also important not to spit this in the sink, shower or toilet as it may solidify and clog the drain. Personally, I keep an old supplement container and spit the oil in that each morning and throw away when it is full.

Do I Have to Swish for 20 Minutes?

I found it difficult to swish for the full 20 minutes when I first started oil pulling. Though this is recommended, it isn’t a hard and fast rule. Neither is the recommendation to use a tablespoon of oil. If you can only use a teaspoon and swish for 5 minutes, start with that and don’t stress about it. Some people also find that adding a drop of essential oil helps the taste and makes oil pulling easier. Just make sure that any oil you use is safe to use internally. I also find that the best time to oil pull is in the shower, since this is the only time I’m not talking to my husband or kids or doing something else. I don’t usually shower for 20 minutes, but this at least gets me part of the way through the time.

Have you ever tried Oil Pulling? What was your experience? Share below! 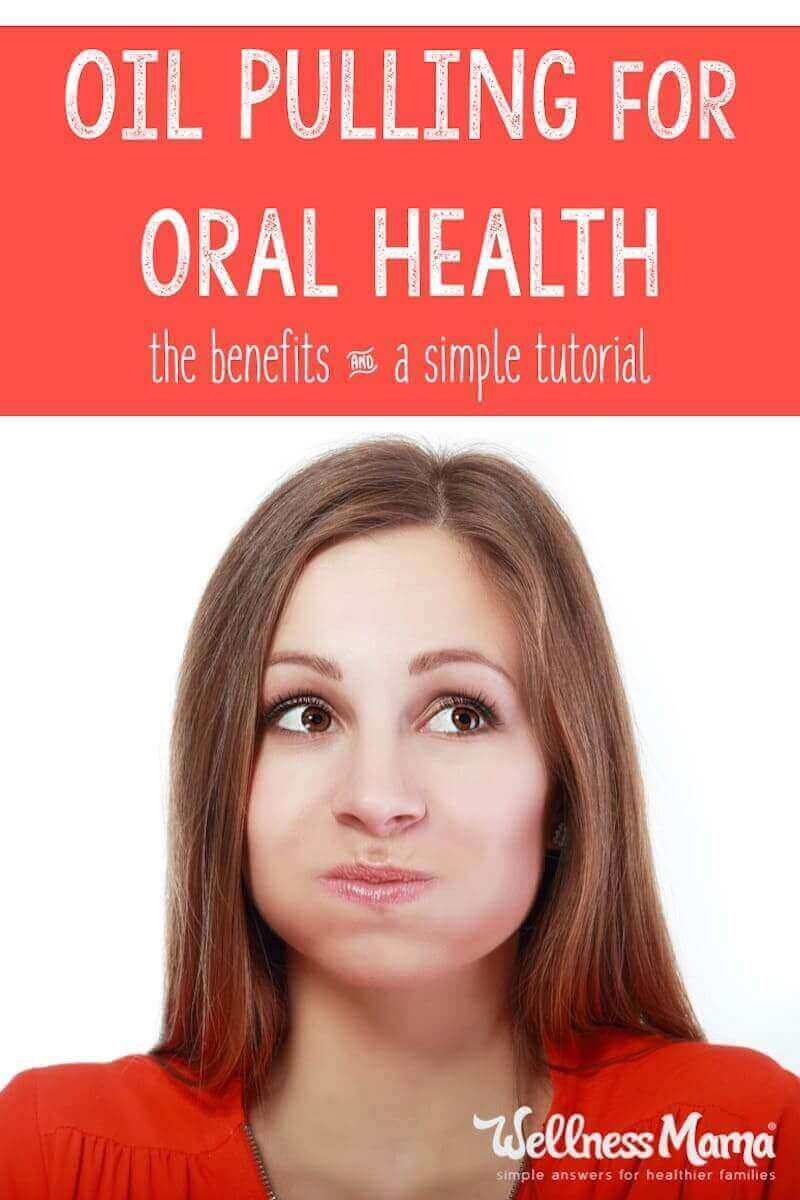