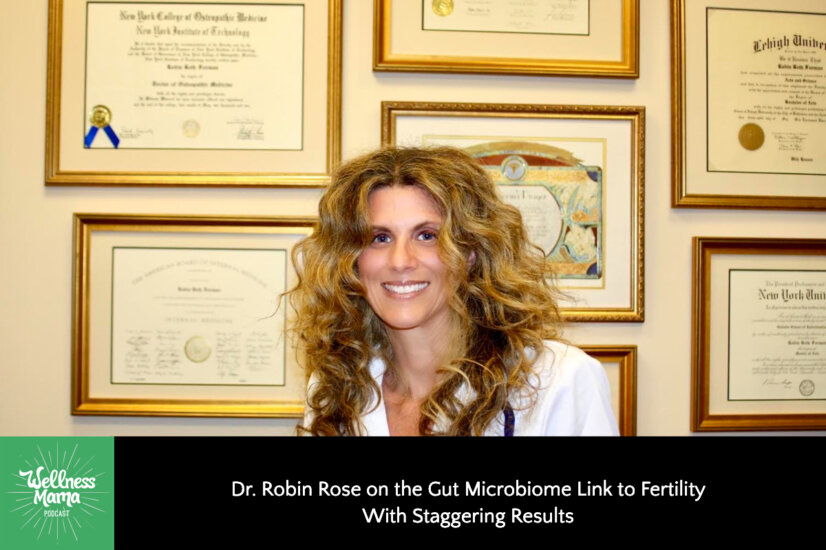 583: Dr. Robin Rose on the Gut Microbiome Link to Fertility With Staggering Results

Today Dr. Robin Rose and I are taking a deep dive into gut health, fertility, and why metabolites are vital to overall health. (Plus what metabolites are!). Dr. Robin is a board-certified specialist in gastroenterology and internal medicine. As a mom herself, her work at her practice Terrain Health focuses on helping women to improve fertility by improving their health through totally customized health plans.

The really fascinating thing here is that the clinical studies on this method show a practically unheard of success rate. These women go from about a 30% chance of a successful pregnancy to a 75% success rate. This information is for women who are struggling with fertility, even if they’ve already started on IVF, but also for women who are overall trying to have a healthy pregnancy.

Even if you’re like me and not currently trying for a baby, Dr. Robin’s information today on how gut bacteria and metabolites affect the body is a game changer when it comes to health. So I hope you’ll join me for today’s podcast. Let’s dive in!

This episode is sponsored by Onnit… You know those times when you’re so into what you’re doing that you can’t think about anything else? The times when you’re at your most focused and productive? Psychologists call that feeling of being in the zone “flow state,” and Alpha BRAIN from Onnit is the ultimate way to get there. A world-renowned nootropic supplement with over one million bottles sold, Alpha BRAIN promotes cognitive functions, including memory, mental speed, and focus. It can help you remember names, zero in on complex tasks, and think more clearly under stress.

Alpha BRAIN contains amino acids and plant compounds that promote the brain’s release of alpha waves, which are associated with greater creativity and productivity. At the same time, it supports neurotransmitters, chemicals that relay information in and from the brain. If coffee and energy drinks make you jittery, you can rest easy knowing that Alpha BRAIN is caffeine-free. But, if for any reason you don’t like Alpha BRAIN, you can get your money back. Just give us two weeks. If at that point you don’t feel like Alpha BRAIN is a fit for you, just tell us why, and we’ll refund your money on the spot—no return necessary. Right now you can save up to 30% off when you go to onnit.com/wellnessmama

This podcast is sponsored by Wellnesse… that’s wellness with an e on the end, my new personal care line of haircare, oral care and deodorant. Our newest product that I’m so excited about is our all-natural deodorant that works better than conventional alternatives, without the harmful chemicals or pore-clogging junk. Unlike many natural brands, it uses the right balance of natural odor blockers so that you get the protection you want without any irritation or itching. Formulated with only EWG safe ingredients and EWG and B-corp certified, it’s a safe, natural and effective solution for the whole family. Check out these and all of our amazing products at wellnesse.com

582: Frank Elaridi on the Power of Emotions and Hidden Trauma (And How to Clear Them)
Next Post:584: Tucker Max on the Most Significant Finding for Processing Emotions, Trauma, and PTSD