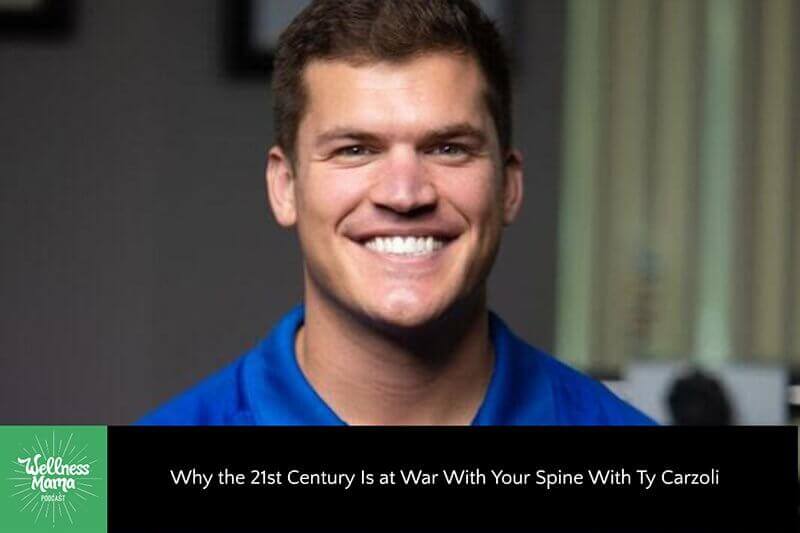 Wellness Mama » Podcast » 260: Dr. Ty Carzoli on Why the 21st Century Is at War With Your Spine

The Wellness Mama Podcast
260: Dr. Ty Carzoli on Why the 21st Century Is at War With Your Spine

The spine is so incredibly important for our posture, alignment, nervous health, and more… but how often do we really think about taking care of it? Dr. Ty Carzoli is a doctor of chiropractic and has conducted research at Florida State in cardiovascular and muscle physiology. He specializes in a really cool form of upper cervical work called orthospinology, which we’ll talk about today.

In this episode, Dr. Ty breaks down spinal science and the way the spine affects pretty much all of the body in a way we can all understand. I absolutely love the mission he’s on to help empower people to take control of their health through education!

Did we tackle all of your questions on spinal health? What did we forget? Please drop a comment below or leave a review on iTunes to let us know. We value knowing what you think and this helps other moms find the podcast as well.

This episode is brought to you by Ritual Vitamins, which are specifically designed just for women. Ritual contains nine essential nutrients that most women don’t get enough of from just from food: vitamin B12 (as methylcobalamin), folate, vegan D3, vitamin K2, vitamin E, omega-3 fatty acids, boron, chelated iron and a proprietary form of magnesium. Ritual supplies them in forms that are easily absorbed and utilized, and all the capsules are vegan, gluten-free, allergen free and non-GMO. They have both a prenatal and a regular women multivitamin both designed specifically for women and synergistic for women hormones. Did you know that 40% of women can’t properly use folic acid due to an MTHFR gene variation? Ritual contains a natural form of folate and synergistic nutrients so the entire multi is more effective. In pregnancy especially, folate is vital. According to OBGYN Dr. Jason Rothbart, “most women don’t find out they are pregnant until around 4-7 weeks pregnant, which is past the first 28 days. In the first 28 days, the organs are rapidly forming. The neural tube (which becomes the central nervous system and vertebral column) is almost completely formed and closed by the end of 28 days.” The essential nutrient Folate helps promote healthy development neural tube. This is why many doctors recommend taking a quality prenatal for several months before trying to get pregnant. Ritual makes it easy with both a prenatal and regular women multivitamin. Learn more about both at wellnessmama.com/go/ritual

259: Idahosa Ness on How to Learn Any Language by Ear
Next Post:261: Chrissa Benson on Practical Tips and Mom Hacks