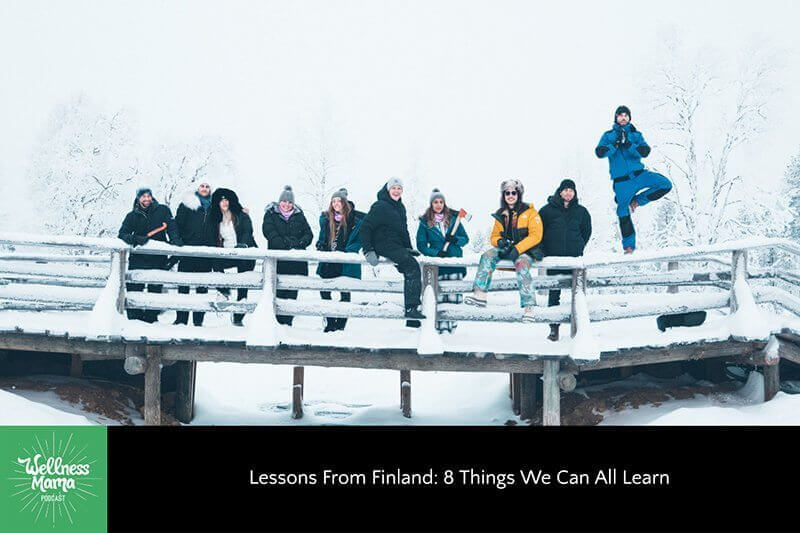 The Wellness Mama Podcast
232: 8 Lessons I Learned From Finland

I recently shared about my trip to northern Finland (Lapland), where I learned to embrace (lots of) snow, eat reindeer, ride on a dog sled, sleep in an igloo, and even took a polar plunge in a freezing river, among other things!

This adventure was possible thanks to my friend Tero Isokauppila, whom I’ve interviewed before on the podcast. Tero owns a company I’m sure you’ve heard me talk about on the blog called Four Sigmatic. They make amazing mushroom coffees, teas, and elixirs that I drink almost daily instead of traditional coffee or tea.

In this episode, Heather and I talk about the highs and lows of the trip, along with everything in between… plus one particularly challenging moment when I had to face some uncomfortable truths about myself.

Episode Highlights from My Finland Trip

What’s an important lesson you learned while traveling? Please drop a comment below or leave a review on iTunes to let us know. We value knowing what you think and this helps other moms find the podcast as well.

This podcast is brought to you by the best CBD I’ve ever tried and the one I feel is the best out there. It is called Ojai Energetics and here’s why I love it… First, its over 20x more absorbable that most CBD, which makes it an incredible value. Over 99% of Ojai CBD gets where it needs to go in your body because of their patented colloidal technology (it is not liposomal) like 90% of the CBD on the market. In fact 90% of the CBD in these oils don’t even make it past the gut and liver and into the blood. This is called, “The First Pass Effect”. Then 90% of the CBD that does make it, isn’t available to the cells that need it. Ojai solves this problem with their colloidal system. I was skeptical and the first time I tried it, I felt a noticeable effect in about 15 seconds which is so much faster than the 20-30 minutes with other brands I’ve used! So now whenever I feel any stress or anxiety or have problems sleeping, I use their CBD oil. Their CBD is derived from completely organic ingredients and batch tested by 3rd Party Vendors For Heavy Metals, VOC’S, Pesticides, Herbicides, Microbes, and for the content of Terpenes & Cannabinoids.Because this version absorbs faster, you also can know if you’re getting the right dose as too much is not optimal. Here’s how: Because Ojai works so rapidly, it causes your body’s cannabinoid receptors in the tongue to modulate. The taste will be bitter when your body needs more CBD, but will change to sweet when you have had enough. So to test this, just take a ¼ dropper, wait 30 seconds, then feel if it’s bitter or sweet. Then repeat until sweet. Ojai is also a certified B corp and they operate their servers off of wind power, they use completely recyclable packaging, and work to build relationships with the farmers who grow the ingredients they use, ensuring fair trade wages, and only supporting regenerative farming practices. Find out more about them and get a special gift at ojaienergetics.com/wellnessmama

This episode is brought to you by Kettle and Fire bone broth and soups. I’ve used these products for years and always keep my pantry well stocked with their products. They have chicken, chicken mushroom and beef bone broths, which are great as a base for soups or even just sipped on their own, but they now also have tomato, butternut and miso soups which are often part of meals at our house. Their newest products, chili and thai chicken soup are whole meals on their own and make last minute dinner so easy at my house! Their broths are made from grass fed and pastured animal bones and are a great source of collagen and amino acids like proline and glycine. I incorporate collagen in some form every day, and Kettle and Fire makes it tasty. Go to kettleandfire.com/wellnessmama and use coupon code wellnessmama20 for 20% off.