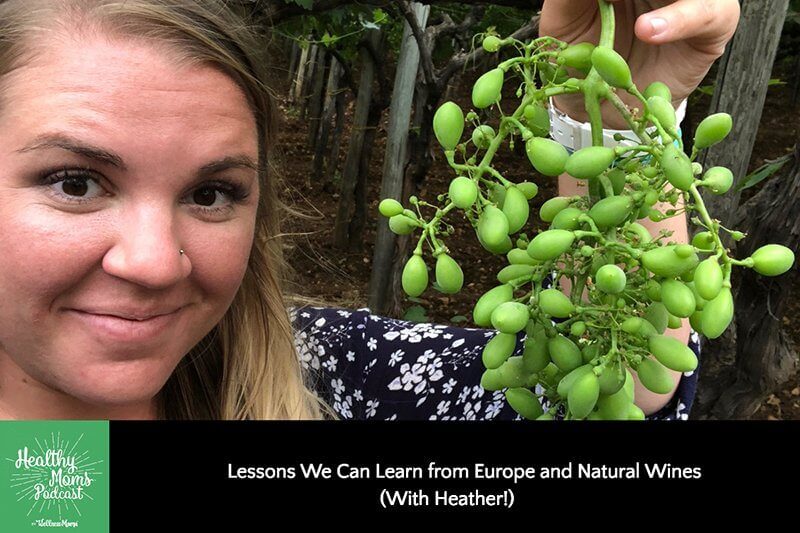 Katie and Heather are back, though not in the Sauna this time, to talk about Katie’s recent trip to Europe and all the lessons we can learn from Europe. They also talk about natural wine and what separates wine from even organic and biodynamic wines.

They were both already big fans of Dry Farm Wines (get an extra bottle for just a penny at this link), but after seeing and understanding the process of natural wines, they are now superfans!

Katie visited many multi-generation small family vineyards in Italy and saw first hand how these wines are produced. These farmers would be offended to hear their wines just called organic, as in the wine world, “natural” means so much more. This is a stark contrast to the food world, where “natural” is an ambiguous and misused term!

For a wine to be considered natural and meet Dry Farm Wines’ criteria, it must:

While we can all hope for the day that such rigorous standards apply to food, it is great to understand and have found a wine company that takes such care in selecting wines.

Things We Can Learn From Europe

The other part of this podcast centers on the many lessons Katie learned from her visit to Europe and the things we can learn from the way people there live. She set out to find out why many places in Europe (including Italy, the pasta capital of the world) consistently outrank the US in many health metrics.

Katie hoped to find a few things and instead found a long list, including:

This was noticeable immediately, especially when visiting vineyards and small family farms. In Italy, these families came together each night for a meal and for time together. This was a given and seemed non-negotiable. Families would prepare food together, share wine and enjoy each other’s company and the strong family bonds were easily evident. (My mulled wine recipe is a great one to share.)

With the growing body of evidence about the importance of community and strong relationships, this alone could be the key to the better health metrics in Europe. For instance, having good relationships with family and friends and a strong support system is statistically more important than quitting smoking (which many Europeans still do) and twice as important as daily exercise!

Compared to the US, Europe seems to use so much less plastic. Plastic is harmful to humans and the environment in many ways, and Europe seems to understand that. Plastic is a known endocrine disruptor, carcinogen, and creates problems in many other ways. In fact, it may be largely to blame for the early puberty crisis occurring in America that is even beyond the control of many parents since plastic use is so widespread.

In many grocery stores, plastic bags simply weren’t available and where they were, they came with a steep charge (up to $1 each). Everyone carries cloth bags or a backpack and most people seem to walk to the store, shop for a single day only and walk home. Which leads us to….

They Move So Much More!

Another striking difference between the US and Europe is the ratio of people walking to driving, especially in towns and cities. Since many cities are older and were designed pre-cars there isn’t much room on the streets or around buildings to park so walking is many times an easier option and certainly a healthier one too!

Katie was surprised that she walked over 75 miles during her short visit, sometimes walking almost 10 miles a day! With recent evidence showing that sitting is bad, and that standing still at a desk can be just as bad, it turns out that the solution is to move more and not do anything all day long.

The Italians had this down and all of them seemed to move so much more as a part of daily life than many Americans do. Heather also found this cool website that rates areas based on how walkable it is.

Many of the people Katie met also have a variety of other health factors in their favor, including taking daily naps, growing their own food and living a more minimalist lifestyle. Listen to the episode to learn more!

What do you think? What do you think we can learn from Europe? Any other questions? Pass them on in a comment below or in a review on iTunes. I read each and every comment, and my guests often do too and might answer your questions!