How to Brush Your Teeth Correctly

I’m guessing (or at least hoping) that you learned to brush your teeth at a really young age and you’ve probably been brushing them pretty much that same way since then. You may have gotten a more grown up toothpaste that doesn’t taste like bubblegum and your toothbrush may not have a picture of Elmo on it anymore, but you likely still use the same method to brush.

A Better Way to Brush?

Just like we eventually grow out of bubblegum flavored blue toothpaste (Tip: use a natural toothpaste with your kids too!), there is a science-backed and more effective way to brush your teeth as well. Statistically, all of us could use an upgrade to our oral hygiene habits anyway, as over 90% of adults have some form of gum disease!

The early symptoms of gum disease are often ignored, and what starts as just bleeding gums or bad breath can eventually cause severe oral health problems and even tooth loss. Research is finding that not only is gum disease a leading cause of tooth loss in adults, but those bacteria living in the mouth and under the gums can cause systemic problems in the body as well! (That is why those with heart trouble and certain other medical conditions are told to take an antibiotic whenever getting their teeth cleaned at the dentist.)

While brushing alone won’t necessarily stop gum disease, there is a particular method of brushing that was discovered years ago that more effectively fights these harmful strains of bacteria in the mouth.

It’s All About That Bass… 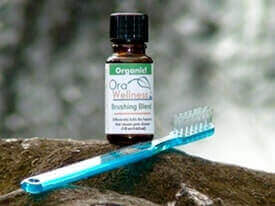 Ok, ok… not the song, but an old school doctor named Dr. Charles Bass who discovered this method of brushing (now called the Bass Brushing method). At the time, Dr. Bass was the youngest person to become Dean of a medical school and was a pioneer in his field, carrying the first microscope west of the Mississippi River. (source)

Although he was academically gifted, his teeth weren’t as genetically fortunate, and at a young age, he was diagnosed with advanced gum disease and his dentist recommended complete removal of all of his teeth. He didn’t find this option particularly appealing (who would!) and instead decided to use his medical knowledge to try to address the disease scientifically.

Using his microscope, Dr. Bass identified the strains of bacteria in his mouth and used the microscope to gauge if different methods he tried were working to fight his gum disease, eventually identifying a method of brushing and a special toothbrush that helped reverse his gum disease. He was said to have died with all of his teeth in his mouth.

Why You Should Brush Your Gums

The method that Dr. Bass discovered for brushing, the “Bass Brushing” technique, is effective because it addresses bacterial colonization in the gums and doesn’t just focus on “scrubbing” the surface of the teeth. Dr. Bass found that many toothbrushes are too abrasive with bristles too close together to effectively address bacteria in the gums, so he created a brush called the Bass Brush that has bristles farther apart to be able to effectively reach the gums as well.

These specialized brushes also have rounded tips instead of the sharp/straight tips of most bristles, making them gentler on the gums. I have several family members who were told they were brushing too hard and had receding gums as a result. This brushing method and these more gentle toothbrushes help address this problem as well. Here’s a visual of the difference:

While the Bass Brushes are recommended for this method (and they are the brushes we use), some people have noticed some of the benefits from using the Bass method with their regular toothbrushes.

How to Brush Your Teeth With the Bass Brushing Method

First, hold the toothbrush gently! You’re not cleaning a grout line, so rather than holding the toothbrush like a scrub brush, hold it gently so your arm can relax and apply the small movements required for the Bass brushing technique:

Here’s a video that shows the method and explains why it works:

When I was younger, I had swollen gums that started when I had braces (the latex in the rubber bands irritated my gums). Even years after the braces came off, my dentist always commented that my gums were swollen, especially on my bottom front teeth. A few years ago, he was worried that I had the beginning of gingivitis in my gums and that due to the swelling, it was hard to effectively clean under the gums.

It wasn’t until years later when I started using natural toothpaste options and Bass Toothbrushes that the swelling in my gums finally went away completely. Since switching, my gums are not swollen and my teeth are no longer sensitive to cold.

For years I used OraWellness Heal Thy Mouth Blend as toothpaste or in homemade toothpaste recipes since it contains oils that help battle the bacteria in the mouth. Now, I use my Wellnesse Whitening & Remineralizing Toothpaste since I know exactly what’s in it and I obviously created it to meet all of my healthy mouth specifications!

If you want try to make your toothpaste instead (as I did for years), I recommend these homemade recipes:

Even if you decide to stick with the cartoon character toothbrush, try brushing your teeth with the Bass Brushing Method instead. Your teeth and gums will thank you!

Ever used a Bass toothbrush or any other natural toothpaste? Share your experience below!

177: Why (Almost) Everything You Know About Dental Health Is Wrong With Periodontist Dr. Al Danenberg

Oil Pulling Benefits: How to Use Coconut Oil for Healthy Teeth

399: Chronic Pain: What’s Wrong With the Normal Approach and How to Fix It With Dr. Yoni Whitten