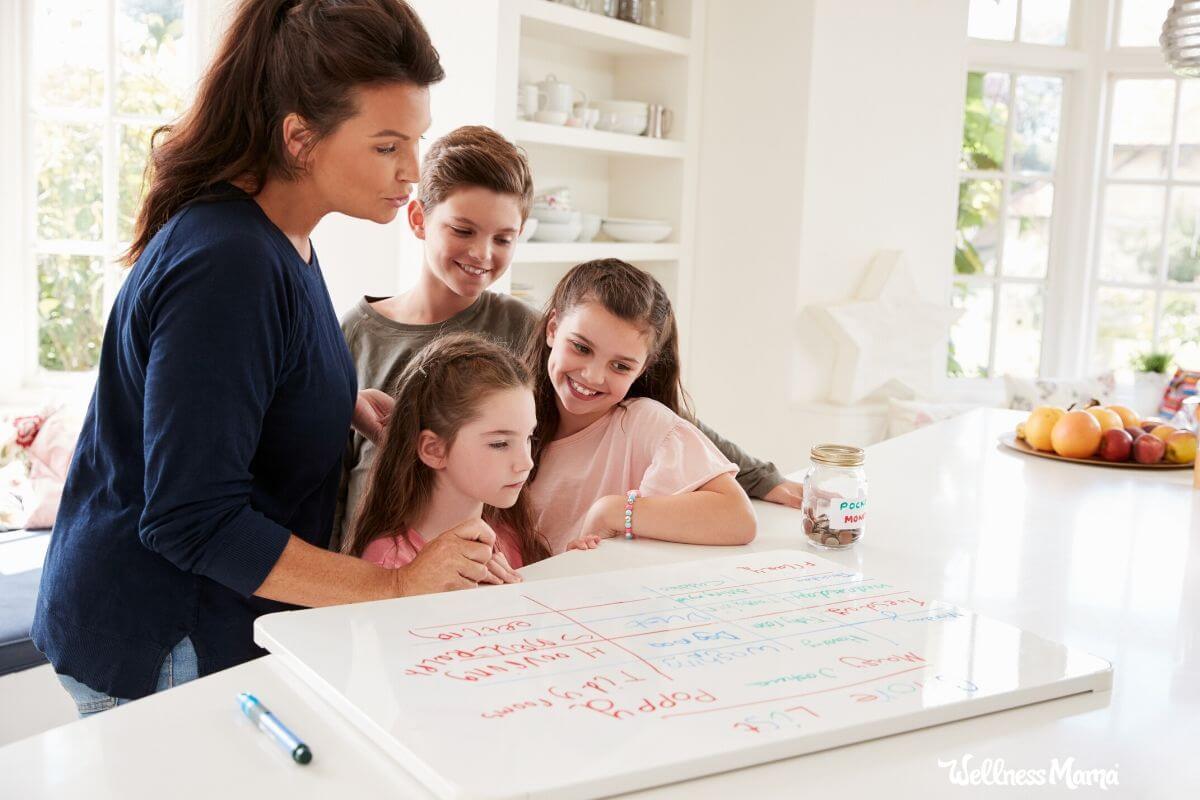 My Parenting Rule to Foster Independence (& Save My Sanity)

I can’t even count how many times I’ve heard the phrase, “I don’t know how you do it all with six kids!” And the secret is…. I don’t. At least not all of it. And certainly not all the time. That’s been one of the many lessons that motherhood has taught me and it led to one simple parenting rule that makes life easier on all of us.

Out of necessity, my kids learned early to do a lot of things on their own. I couldn’t do everything for them if I tried. In this post, I’m sharing the one guideline I personally follow that has helped reduce my stress level and foster independence in my kids. I’m also sharing a few examples of ways it works best for our family. Every family is different and there are, of course, exceptions to this rule in my family and it may not work for everyone.

The Parenting Rule That Saved Me

As a new mom, I used to do a lot more for my children because it was easier. With my first child and even when the second arrived, I could still do everything for everyone. In some ways, it was easier to unload the dishwasher than to teach them to do it. Easier to get them dressed than let them take forever and end up in a mismatched outfit. (Although we did eventually get smart and tame that problem with capsule wardrobes for the kids).

But as they grew and more was added to my plate, I realized it wasn’t a sustainable model. More than that, it helped me realize that my goal is to raise adults, not adult-size children, and that while it wasn’t a big deal to do their dishes and laundry for them at a young age, it would be at some point.

I evaluated when would be the best time to teach them each of these skills and realized there was only one logical answer:

As soon as they were capable of doing these things on their own.

I realized that I was doing a lot of things for them that they could be doing on their own. Not only was this an extra burden for me… it wasn’t helping them in the long run either. I decided to give my kids more freedom by giving them the opportunity to learn the skills they needed to function on their own.

I do think that ability and maturity vary by child. Some of my kids have taken on certain jobs earlier than others, but often they surprised me at their ability to learn and take on a skill at a younger age than I expected. For instance, one of my daughters learned to do her laundry when she was five and has been doing it ever since.

As I changed my mentality and started letting go of tasks my children were capable of, another beautiful thing happened… it fostered a team mentality in our family and they felt great about really contributing to our family.

I realized at this point that there are many correlations between business teams and families. I’d mastered one (business) but realized I had to transfer those skills to the other.

Years ago, at the peak of my stress and before I learned to implement this with my family, I think I came pretty close to a nervous breakdown. I had an incredible team at Wellness Mama to rely on. We had goals and systems that helped the business run smoothly and as a result, I didn’t often feel stressed in my work life.

At home, on the other hand, I was trying to manage all of our schedules and the household largely by myself and almost completely in my head. Unlike my effective business systems, I was flying by the seat of my pants at home and felt the stress as a result.

The shift to everyone in our house being able to do the tasks they were capable of and feel like a team was life-changing. On the other hand, when I was handling everything myself and problem solving for my kids, I was essentially sending them the message that they were not capable of doing these things on their own. I was treating them like long-term incapable guests in my home, not as an essential part of our family team.

Listen to this podcast episode on Umbrella Parenting and Raising Children With Strong Coping Skills with Dr. Jen Forristal.

The other great part of this approach to handing off skills is the built-in use of natural consequences. For instance, my kids handle their own laundry. If they run out of clean clothes, guess what… they’ve learned the importance of keeping up with laundry.

In other examples, most school-age children are capable of making their own school lunches or doing their own homework. If they forget either of these things, rather than a parent rescuing them, they learn from temporary hunger or a bad grade to remember these things in the future.

Don’t get me wrong… I fully understand the desire to protect our kids from discomfort, but the discomfort of natural consequences can have a long-term benefit.

Here’s what I realized:

One in four college-age and college graduate adults still live at home. Psychologists write about the increasing number of adults who have trouble integrating into adult life outside of their parents. And it turns out, our children are happier in the long run when they learn independence.

From a 2014 article in The Journal of Child and Family Studies:

Research has shown that children with hyper-involved parents have more anxiety and less satisfaction with life, and that when children play unsupervised, they build social skills, emotional maturity, and executive function.

As much as some days I wish I could freeze time and keep my children these ages forever, they’re insistent on growing up and they need to be prepared for adult life. As adults, we face natural consequences all the time. Drive too fast? You might get a ticket. Forget to pay a bill? You will pay interest or get your electricity shut down.

Natural consequences are a very real part of life. In my opinion, our children need to be given the gift of learning from them early when the stakes are not as high.

How to Implement the Rule (Without Mutiny)

When I decided to stop doing things that my children could do on their own, I realized they were not used to this and it wasn’t going to happen overnight or without resistance. In fact, I was close to the state of one of my favorite quotes from Foul-Mouthed Mommies:

Some moms run a tight ship. I run a pirate ship. There is some swearing, some drinking, and a touch of mutiny from the crew I created.

Jokes aside, I knew I needed a process for making this transition easy. It took some trial and error, but I eventually settled on a system. You can read more detail in this post, but for the transition, I used this system:

In the beginning, I knew that just telling them to start doing these new tasks wouldn’t be enough (or fair to them). In order for this method to work well, I had to give them the skills and confidence to be effective at them.

I used a four-step hand-off:

One of the main reasons I was holding on to doing everything? I thought I was better at it, and I didn’t want it to be done the “wrong way.”

I took a step back and realized it was better to have things done (even imperfectly) through shared responsibility of a team than to do it myself and be stressed all the time. I’d learned this in business years ago too after hiring people and not letting them do their jobs because I thought I could do it better.

While I realized I could do each of the tasks better on my own, I certainly couldn’t do all of them better if I had to do everything.

Yes, a few shirts were harmed in the making of this process and some stains lived to see another day, but long term it has absolutely been worth it!

As my kids learned new tasks, I tried to focus on encouraging the effort and not the outcome. I didn’t want them to fear trying if they weren’t great at something at first. In fact, I hope my kids learn that failure is often part of the learning process and eventually don’t fear it at all.

This meant giving practical praise about the process and telling them I was proud of them working hard and that they’d get better with practice.

Carol Dwek, the researcher that pioneered this idea of the “growth mindset,” offers some practical ways to phrase these things that encourage a long-term positive mindset:

Now, before anyone gets up in arms or thinks I’m a heartless mom because I won’t do anything for my kids, I should clarify. Like anything in life, there are occasional and obvious exceptions. For instance:

I’m still a mom and take joy in doing things for my kids, but I am much more aware of the long-term goal we’re working toward.

As I mentioned, the specifics of age-appropriate tasks vary by child. You’ll need to make a list of the tasks that need to be accomplished in your home and figure out which ones your children can handle at what age.

These are some examples to get you started (just from my own experience… add your own!):

At the end of the day, we probably all share the goal of raising kind adults who contribute to society in a positive way. This parenting guideline has helped our family tremendously and I’m hopeful it is helping prepare my kids for life. I also found the book How to Raise an Adult really helpful and would recommend it if you’re looking for further reading.

What do you think? How do you navigate this with your family?