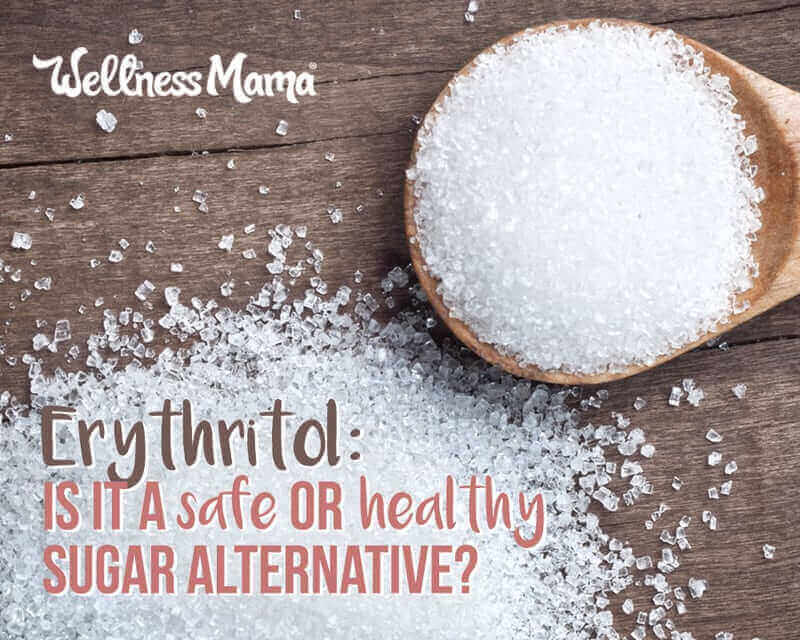 Erythritol: Is This Artificial Sweetener a Healthy Alternative to Sugar?

Now that sugar has become the devil behind many chronic health issues, health conscious people are turning to natural sugar alternatives. Erythritol is a sugar alcohol gaining popularity as a sugar alternative because it doesn’t have the after taste of stevia or the gastrointestinal side effects of xylitol.

Because erythritol has the mouthfeel and taste of sugar, it is tempting to use it by the cups in baking recipes, but that might not be a good idea. Have you ever wondered if erythritol is safe?

Erythritol is a sugar alcohol naturally found in small amounts in some fruits and fermented foods. This includes wine, sake, beer, watermelons, pears, grapes, and soy sauce. Some scientists also detect it as naturally occurring in low levels in the human body.

Its chemical properties are similar to sugar but it has several alcohol groups, which is why it is called a polyol. (Erythritol is a smaller molecule than xylitol which might explain why it causes less problems than xylitol.)

Because it is not very sweet on its own, it is often mixed with another sweetener like allulose or monk fruit.

Is Erythritol Safe or Dangerous?

The safety of erythritol is controversial for many reasons:

Toxicology studies have reported no adverse effects in mice, healthy people, or diabetics except in very large doses on empty stomach. In fact a high percentage is rapidly absorbed in the upper intestine and pass through our system unchanged, with around 90% of it excreted intact in the urine.

So with all the controversy why are people choosing it?

A few of the reasons people are choosing this alternative sweetener….

Erythritol May Help with Diabetes and Weight Loss

Unlike sugar and many artificial sweeteners, erythritol does not induce an insulin response or change glucose metabolism in the body. This is true both for healthy and obese people. In diabetics, replacing sugar with erythritol seems to improve blood sugar levels and some other clinical outcomes.

It does somewhat change hormones that control gut movement, so that food takes longer to move from the stomach to the small intestine. Another study also showed that non-obese people who consume a meal with erythritol feel more satiated than those who had a meal with real table sugar.

Erythritol Is Good for Dental Health

Sugar alcohols like xylitol and sorbitol are well known for their ability to help kill bad dental bacteria. However, erythritol is even more powerful than xylitol for dental health.

Erythritol can suppress bad bacteria growth, reduce acids in the mouth that can cause tooth decay, and inhibit biofilm formation. Therefore, sugar-free sweets sweetened with erythritol are considered safe for the teeth, and some dentists are even using it as a disinfectant.

It Is an Antioxidant

A cell-based study showed that erythritol can quench a reactive oxygen species (a chemically reactive chemical species that can cause cell damage). In addition, the study was able to show that it protected blood vessels of diabetic rats against oxidative chemicals and hardening of the arteries. This might be another reason why erythritol seems to help with diabetes.

Side Effects of Erythritol: The Dose Makes the Poison

Unfortunately, there are also some cautions to be aware of with the sweetener.

High Doses Can Cause Digestive Problems

In adults, consumption of erythritol at a high dose can cause uncomfortable stomach rumbling, nausea, and gas. This only happens when adults ingest a high dose, like at 50 grams (about 3.5 tablespoons) in one sitting.

In beverages, the safe concentration for children should not exceed 2.5% (6.25 grams in one cup), which means that it may be safer to mix erythritol with another natural sweetener like stevia.

It Can Aggravate Gut Infections

While normal human gut flora doesn’t ferment erythritol, unabsorbed erythritol in the small intestine can cause a problem for people with small intestine bacterial overgrowth. Polyols like erythritol can trigger symptoms of irritable bowel syndrome (IBS), including gas, diarrhea, and malaise.

Those with IBS, SIBO, or who have had bad reactions to it should avoid this sweetener.

Donna Gates of the Body Ecology diet does recommend using it as an alternative sweetener for people on the candida diet for those who tolerate it.

There are a few case reports of allergic reactions, including a case of hives and another of anaphylaxis. Interestingly, based on the first case study, it is still possible to be allergic even though the skin prick test comes back negative.

A group of researchers in Philadelphia tested various non-nutritive sweeteners on fruit flies, and found that erythritol in Truvia is the only sweetener that robustly kills the flies. Because it tasted sweet, the fruit flies would readily eat it.

(Now, until we understand how it kills the fruit flies, we don’t know how this impacts human health as some other species of insects can eat it and do okay.)

Concerns with GMOs and Grains as Raw Material

Because genetically modified products like corn syrup are cheap, many food products on the market that contain erythritol definitely contain GMO crops, which means that these foods are bad for the environment. In addition, non-organic foods that contain GMOs, even ones that are highly processed, can contain pesticide residues.

If you avoid gluten, you will have to be careful with residual gluten in erythritol that may be made from wheat or gluten-containing grains. You want to pick a good company that produces their product only from gluten-free sources. Ideally, get a certified organic one, and avoid non-organic products that contain erythritol.

Should You Use Erythritol?

At the time of this post, Wellness Mama medical reviewer Dr. Ann Shippy advised that she isn’t recommending sugar alcohols like erythritol based on research that shows they may alter the gut microbiome and cause unwanted symptoms even at a very low dose. However, unless a person has digestive problems like IBS, SIBO, or other bad reactions, using erythritol as a treat once in a while may be okay.

Have you tried alternative sweeteners? Which have worked for you and which haven’t? Share below!