When it comes to discussing nutrition and food, organ meat certainly isn’t the most glamorous subject. For some, the very topic evokes a sense of panic and horror.

Perhaps it brings to mind a memory of being served dense, glossy liver and onions. Maybe it reminds you of walking past a city butcher shop with obscure animal parts displayed behind the windows. Of course, it probably doesn’t help that the culinary term for organ meats—offal—is literally pronounced “awful.”

In recent years, food has become increasingly industrialized, standardized, and commercialized. Grains of all kinds are highly processed, coated with sugar and put into boxes. Heirloom vegetables and unique fruits have been phased out and replaced with generic varieties that are easier to grow, transport and display. Dairy is skimmed, pasteurized and fortified with synthetic nutrients. And every store offers the same cuts of meat—chicken breasts, tenderloins, steaks—all neatly wrapped in plastic and displayed in rows in the refrigerated section.

Our food supply certainly wasn’t always this way. People didn’t always just consume muscle meat. Traditional diets from around the world were rich in dishes containing organ meats and other high protein options. From liver to kidney and sweetbreads to tripe, organ meats were often part of meals.

Many of the world’s healthiest peoples, as studied by Dr. Weston A. Price, ate organ meats frequently. In hunting cultures, organs like heart and brain were consumed first. They were believed to pass on the strength and intelligence of the animal.

Even after the introduction of modern farming, organ meats were savored as special delicacies. Because offal is less plentiful than muscle meat, it was considered somewhat of a rare and special treat often reserved for the wealthy.

Offal, being delicate and difficult to store, eventually became too expensive and time consuming for companies to prepare on this mass scale. It was therefore either discarded or ground and sold off for use in pet food.

Factory farming has allowed for the production of large quantities of meat at a good price, but there are consequences to this method that can’t be ignored. It has contributed to substantial pollution, decreased biodiversity, declining nutrient levels in soils and the inhumane treatment of livestock. In it, we’ve also lost the deep reverence that comes along with understanding where our food comes from and the respect that is shown by using the entire animal.

With the closing of these shops came a loss of knowledge on how to prepare and eat unique cuts of meat like organ meats. As a result, only meat varieties that are quick and easy to cook have remained popular.

This scenario is unfortunate for many reasons. From a nutritional perspective, we are missing out on a range of health benefits from organ meats. Offal is particularly concentrated in bioavailable forms of vital nutrients including zinc, iron and B vitamins, alongside specialty nutrients that are difficult to obtain from other foods:

Organ meats are also high in folate, choline, zinc and other nutrients. 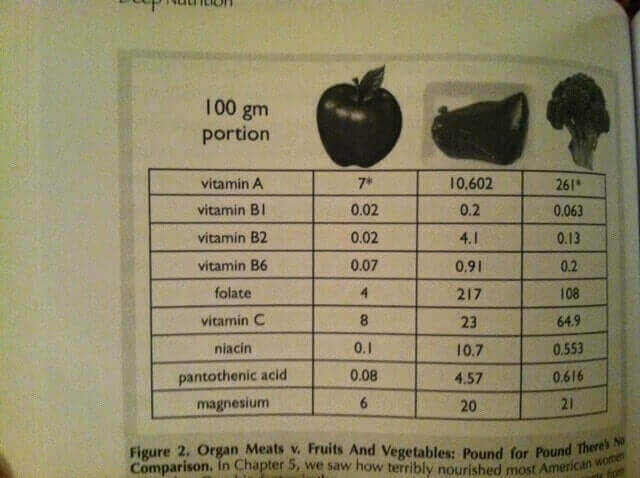 While organ meats do function as filters in the body, they don’t store the toxins. The job of organs like the liver is to remove toxins from the body, and as such, they store many fat soluble vitamins and nutrients needed to accomplish this task.

As Weston A. Price Explains:

One of the roles of the liver is to neutralize toxins (such as drugs, chemical agents and poisons); but the liver does not store toxins. Poisonous compounds that the body cannot neutralize and eliminate are likely to lodge in the fatty tissues and the nervous system. The liver is not a storage organ for toxins but it is a storage organ for many important nutrients (vitamins A, D, E, K, B12 and folic acid, and minerals such as copper and iron). These nutrients provide the body with some of the tools it needs to get rid of toxins.

Of course, we should consume liver from healthy animals–cattle, lamb, buffalo, hogs, chickens, turkeys, ducks and geese. The best choice is liver from animals that spend their lives outdoors and on pasture. If such a premier food is not available, the next choice is organic chicken, beef and calves liver. If supermarket liver is your only option, the best choice is calves liver, as in the U.S. beef cattle do spend their first months on pasture. Beef liver is more problematical as beef cattle are finished in feed lots. Livers from conventionally raised chicken and hogs are not recommended.

So, in other words:

To call the liver a simple filter is incorrect. If we want to maintain the metaphor, it’s more like a chemical processing plant. The liver receives shipments, determines what they contain, and reacts accordingly. It converts protein to glucose, converts glucose to glycogen, manufactures triglycerides, among many other tasks, but its best-known responsibility is to render toxins inert and shuttle them out to be expelled – usually in the urine via the kidney. It doesn’t just hang on to toxins, as if the liver is somehow separate from the body and immune to contamination. The liver is part of the body! If your liver contains large amounts of toxins, so do you!

Many studies, when looking at the effect of a synthetic nutrient in isolation don’t take into account the other nutrients naturally present in foods that balance that particular one. From natural sources, toxicity was only noticed in adults in Arctic explorers who consumed polar bear and seal liver (millions of units of natural vitamin A).

It’s important to recognize that if you are iffy on organ meats, you are not alone—it is a perspective that has been shaped by culture and history. There is a shift happening. People are beginning push back on the commercial food system. They are fighting to reclaim traditional foods, to opt for supporting local farmers, to protect the environment, and to eat consciously. As a Wellness Mama reader, I know you’re a part of this real food movement too, otherwise you wouldn’t have braved reading this unique and potentially controversial post.

If you are interested in reviving the tradition of cooking with organ meats, there are several books available on the topic. Two recent favorites are Odd Bits: How to Cook the Rest of the Animal and The Whole Beast: Nose to Tail Eating, both of which approach the subject with a spirit of curiosity and culinary adventure. When sourcing organ meats, try to find a local farmer that uses sound farming practices who you can purchase from directly. There are also trusted online sources that ship grass-fed organ meats.

Often, I can find quality meats and organ meats from local farmers and just make sure that the animal was grass-fed, raised on pasture and (if possible) not given grains or antibiotics.

If the idea of eating organ meats still just isn’t appealing, there are other options to turn to. There are supplements available such as Desiccated Liver and Desiccated Heart, which provide grass-fed, freeze-dried organ meats in capsule or powder form. The capsules can be quickly and tastelessly swallowed, while the powders can be conveniently mixed into foods like soups, stews and chili or patted unknowingly into burgers. This way, all of the nutritional benefits of organ meats can be obtained without extended planning and preparation. 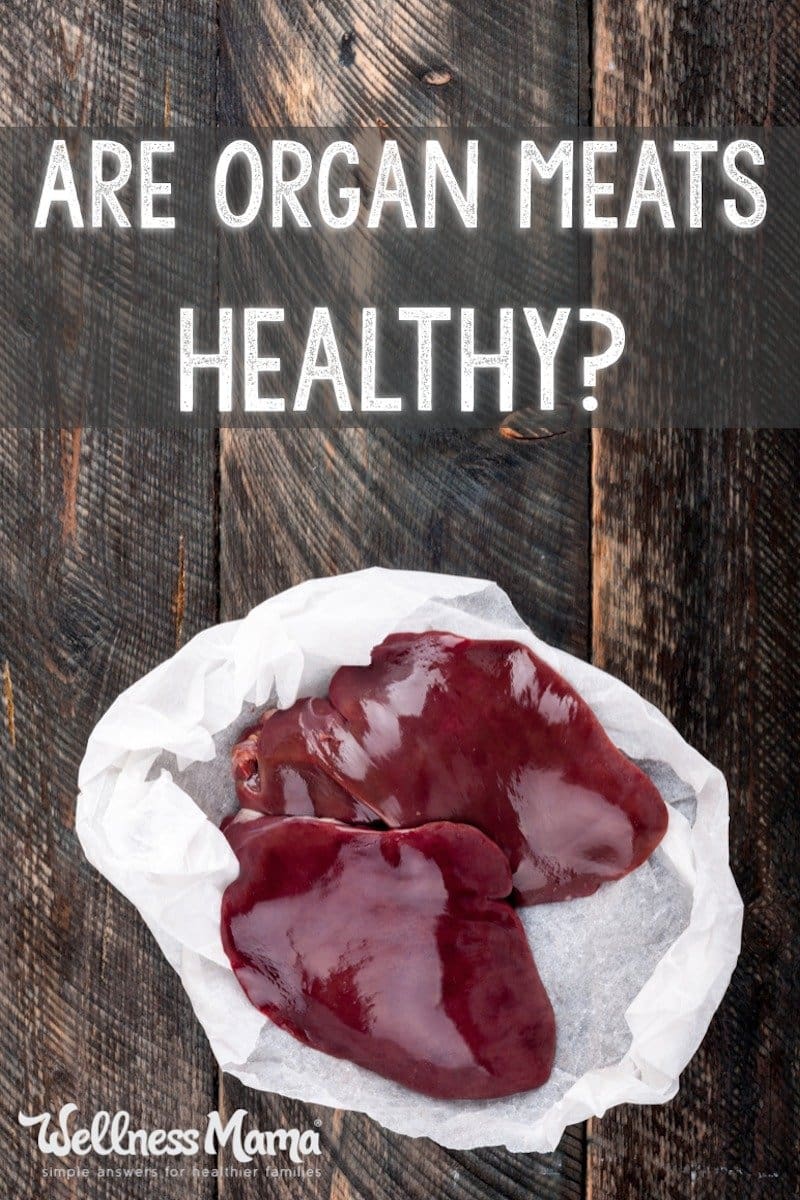 Gentle Oatmeal Lavender Facial Scrub Recipe (DIY)
Next Post: How to Grow More in Less Space with a Vertical Garden