The thyroid is a small butterfly shaped gland in the neck that is intricately involved in body temperature, proper digestion and cognitive function and hormone health. In other words, when the thyroid isn’t happy, the body isn’t functioning properly.

I know firsthand the frustration of living with thyroid disease and how difficult it can be to get the body back in balance. I saw many doctors over a period of 7 years before finding answers and I wanted to bring my doctor on the podcast to help shed some light on thyroid disease and autoimmune disease. 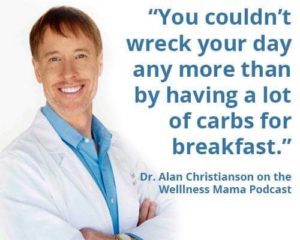 Dr. Alan Christianson is a Naturopathic Doctor who specializes in natural endocrinology with a focus on thyroid health.

He read his family’s entire set of encyclopedia’s before he went to kindergarten and has always been highly intelligent.

In grade school, he struggled with epilepsy, poor coordination and obesity and after being made fun of in class one day, he resolved to get healthy. He read a lot of nutrition and health books, became interested in fitness and became the fastest runner in his class.

As a naturopathic doctor, he now helps thousands of people a year (including me) with his specialized approach to nutrition and natural medicine.

He founded Integrative Health, a practice of physicians in Arizona whose philosophy is to “Provide smart, safe, primarily natural and scientific solutions for the entire family to live in good health.”

In this episode, we really delve into the topic of thyroid health and Dr. Christianson sheds some light on topics such as:

Dr. Christianson has also done a lot of research in the area of adrenal health and he provides some unique insight on important factors to get them in balance. He is releasing a book in December about Adrenal/Thyroid health, but talks about some of the core concepts.

I found it fascinating that there are 60 animal species experiencing similar rises in rates of obesity as humans (even in situations where calories are controlled). Dr. Alan talks about his research into longevity and risk of death and how cortisol patterns were a better predictor of risk of death than common factors like smoking, heart disease, obesity and diabetes. In other words, someone with disrupted cortisol patterns would have a higher risk of dying from all causes than a smoker with heart disease.

He talks about unique factors that are not often suggested like making sure to get 30 minutes of outdoor light within an hour of rising to help regulate cortisol patterns and eating specific foods at specific times of day to support the adrenals. A favorite quote from the interview:

You couldn’t wreck your day any more than by having a lot of carbs for breakfast.

Have you ever struggled with thyroid or adrenal problems? Listen to this episode!