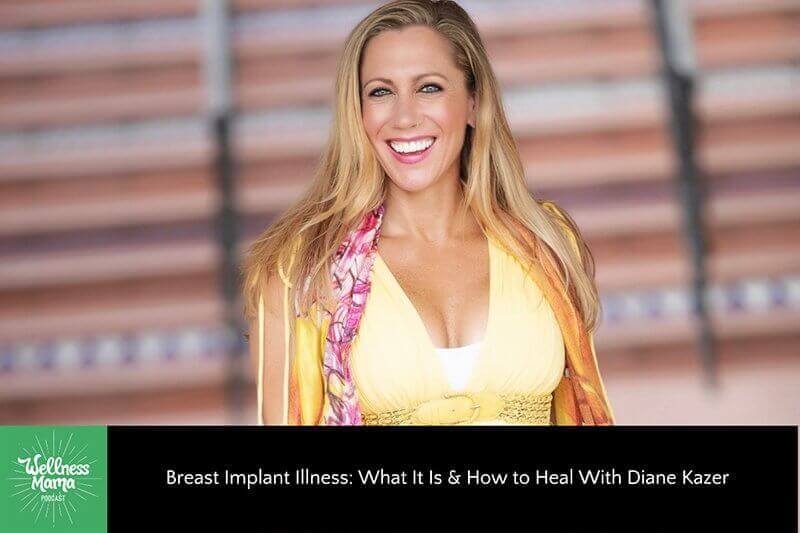 Today we are covering a much-requested topic: breast implants and how they might affect health. I am here with Diane Kazer, a pro soccer player turned functional diagnostic nutrition practitioner. Many credit her as a visionary and a gamechanger in the world of women’s hormones, detox, empowerment, and leadership. Diane started the CHI Hormone Warrior Transformation Tribe as well as the TITS method, a holistic approach to healing from breast implant illness, which she experienced firsthand. We’re going to go deep on that today in particular since I have gotten so many questions from women struggling with it.

I think it’s important to say before we get started: The goal here is to inform, not to pass judgment on motherhood or anything related to body image. We all have our own choices to make but I firmly believe education is the place to start!

Did you enjoy this episode? What other questions do you have about breast implants? Please drop a comment below or leave a review on iTunes to let us know. We value knowing what you think and this helps other moms find the podcast as well.

This podcast is brought to you by Thrive Market, a company I’ve loved for years and order from all the time. In fact, the majority of the non-perishable and frozen foods you’ll find in my house are from Thrive. If you haven’t checked them out, you definitely need to and you can get a completely risk free 30-day trial as a listener of this podcast at thrivemarket.com/wm. Here are just a few of the reasons you’ll love them: They have over 500 of their own Thrive Market brand products that are incredible quality and at amazing prices. These include everything from bulk ingredients and spices to chips, salsa, nuts, snacks, and things like tuna and sardines. These are all non-GMO and most are organic, and at prices cheaper than conventional alternatives in my local stores. They also have high quality meat and seafood from completely grass fed meat to pastured pork and free range chicken and it’s all delicious. Thrive is essentially an online Costco meets Whole Foods online and at much better prices. In my most recent order, you’d find a bunch of tuna and sardines, bulk nuts and spices, plantain and cassava chips, crackers, condiments and snacks. All Thrive Market brand and all favorites at our house. If you haven’t, you’ve got to check it out. Go to thrivemarket.com/wm to start your 30-day free trial and see for yourself how awesome it is.

This podcast is brought to you by Ojai Energetics. It’s the best CBD I’ve ever tried and the one I feel is the best out there. Here’s why it’s awesome. First, it is over 20x more absorbable that most CBD. Over 99% of Ojai CBD gets where it needs to go because of a patented colloidal technology (it is not liposomal) like 90% of the CBD in oils that don’t even make it past the gut and liver and into the blood. This is called, “The First Pass Effect”. Then 90% of the CBD that does make it, isn’t available to the cells that need it. Ojai solves this problem with their colloidal system. I was skeptical and the first time I tried it, I felt a noticeable effect in about 15 seconds which is so much faster than the 20-30 minutes with other brands I’ve used. It is derived from completely organic ingredients and batch tested by 3rd Party Vendors for Heavy Metals, VOC’S, Pesticides, Herbicides, Microbes, and for the content of Terpenes & Cannabinoids. Because this version absorbs faster, you also can know if you’re getting the right dose as too much is not optimal. Here’s how: Because Ojai works so rapidly, it causes your body’s cannabinoid receptors in the tongue to modulate. The taste will be bitter when your body needs more CBD, but will change to sweet when you have had enough. So to test this, just take a ¼ dropper, wait 30 seconds, then feel if it’s bitter or sweet. Then repeat until sweet. Ojai is also a certified B corp and they operate their servers off of wind power, use completely recyclable packaging, and work to build relationships with the farmers who grow the ingredients they use, ensuring fair trade wages, and only supporting regenerative farming practices. Find out more about them and get a special gift at ojaienergetics.com/wellnessmama

276: Tony Kasandrinos on What You Need to Know About Olive Oil
Next Post:278: Dr. Rob Franklin on Natural Remedies for Pet Health