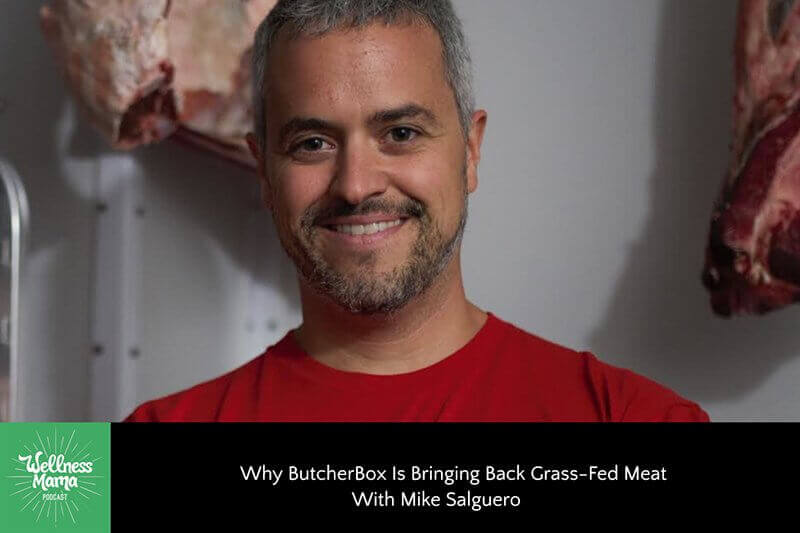 Wellness Mama » Podcast » 222: Mike Salguero on How ButcherBox Is Bringing Back Grass-Fed Meat

222: Mike Salguero on How ButcherBox Is Bringing Back Grass-Fed Meat

The Wellness Mama Podcast
222: Mike Salguero on How ButcherBox Is Bringing Back Grass-Fed Meat

I’m here today with Mike Salguero who is the CEO and founder of ButcherBox, the first delivery service dedicated to providing completely natural grass-fed beef, organic chicken, and heritage pork directly to your door. It’s something our family has used for a really long time.

Today Mike talks to us about how he got into grass-fed meat, why it’s better for you, and how he’s managed to balance his entrepreneurial goals with family life.

Did you enjoy this episode? What other questions do you have about grass-fed meat? Please drop a comment below or leave a review on iTunes to let us know. We value knowing what you think and this helps other moms find the podcast as well.

This episode is sponsored by Fabletics. So here’s the deal- if you’re anything like me and workout pretty much 6 days a week and sauna daily, you go through an incessant amount of gym clothes everyday, which means more loads of dirty laundry. I find myself always buying more gym wear to avoid this issue (you ladies know what I’m talking about), but won’t shell out hundreds of dollars on the expensive brands and was tired of cheap gym wear that wears out quickly with lots of washing. My solution to this predicament is a brand call Fabletics. If you haven’t heard of them, you’re missing out! Fabletics is a fashion-focused activewear brand founded by Kate Hudson and its mission is to empower women by making a healthy, active lifestyle accessible to everyone. No matter if you’re ready to zen out in hot yoga, crush it in a Crossfit class or simply take a stroll in the park, Fabletics has you covered and carries gym wear suitable for any type of workout. Fabletics IS your one-stop shop for affordable gym wear and ALL of their designs are created in-house. Plus, they are cute enough that I find myself wearing them everywhere, not just to work out. I often throw on one of their pullover tops for a cute outfit. Before I forget, Fabletics is offering you an incredible deal you don’t want to miss: Get 2 leggings for only $24 ($99 value) when you sign up as a VIP. Just go to fabletics.com/wellnessmama, and get free shipping on orders over $49. International shipping is available and there is absolutely no commitment when you purchase your first order.

This episode is sponsored by Just Thrive probiotics. I found this company when searching for the most research-backed and effective probiotic available and I was blown away at the difference in their products! They offer two cornerstone products that are both clinically studied and highly effective. The first is their probiotic, which has been clinically studied to help with leaky gut and to survive up to 1,000 times as much as other probiotics or the beneficial organisms in something like Greek yogurt for instance. The difference is, their spore-based strains work completely differently than other types of probiotics. Also, this probiotic is vegan, dairy-free, histamine-free, non-GMO, and is made without soy, dairy, sugar, salt, corn, tree nuts, or gluten—so it’s safe for practically everyone. I even sprinkle it in my kids’ food and bake it into products since it can survive at up to 400 degrees! Their probiotic contains a patented strain called Bacillus Indicus HU36®, which produces antioxidants in the digestive system where they can be easily absorbed by body. Their other product is a K2-7, and this nutrient—you may have heard of it—is known as the “Activator X,” the super-nutrient Weston A. Price recommended. He found this prevalent in foods in the healthiest communities in the world. Their K2 is the only pharmaceutical-grade, all-natural supplement with published safety studies. Like the probiotic, this is also gluten, dairy, soy, nut and GMO-free. Both are best taken with food so I keep both on the table. My dad has trouble remembering to take supplements so he taped them to the pepper shaker, which he uses daily, and they’re now on his daily list as well. Check them out at justthrivehealth.com/wellnessmama and use the code WELLNESSMAMA15 to save 15%!

221: Dr. Mark Cucuzzella on Natural Movement, Sustainable Fitness, & Lifelong Health
Next Post:223: How a Mindset for Moms Can Help You Get More Done & Stress Less