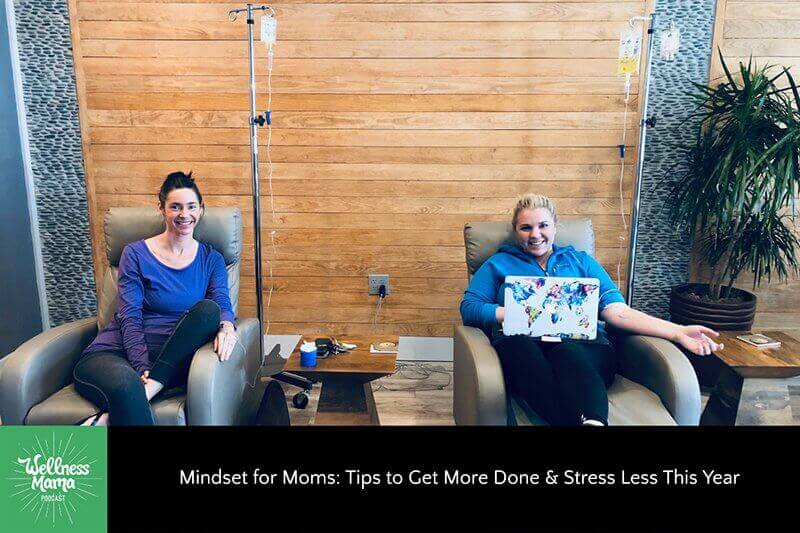 Wellness Mama » Podcast » 223: How a Mindset for Moms Can Help You Get More Done & Stress Less

The Wellness Mama Podcast
223: How a Mindset for Moms Can Help You Get More Done & Stress Less

In this New Year check-in, Heather and I chat about our goals for this year, upcoming projects, and tips for getting more done with less stress this year!

We delve into some health trends we anticipate continuing to grow in popularity in 2019. Specifically:

All things elderberry seem to be on the rise, and with good reason. While both of us have been using homemade elderberry syrup for years, we’re starting to see all types of remedies and even skin care that involves elderberries. Want to get creative? Try these elderberry marshmallows or elderberry tea.

Another health trend that seems to be exploding right now! Be careful, because there are many types out there and some are not as effective as others. I personally prefer this one because it is water soluble and colloidal so it’s highly effective and doesn’t use solvents to extract.

After years of increasing technology use, we’re seeing a trend toward intentional time off from technology and seeking out quiet and focus. Personally, we love taking digital days off for a mental reset.

With Hawaii leading the charge, many states and countries are moving to reduce or ban chemical sunscreens that can harm ocean life:

In a world first, last May Hawaii passed legislation that will ban the sale and distribution of any non-prescription sunscreen containing these chemicals (found in 78% of the most popular brands) from 2021. The Caribbean island of Bonaire followed in the same month. The most comprehensive ban so far is in the small Pacific island nation of Palau, which is to ban the buying, selling, importing or manufacturing of sunscreen and skincare products that contain these chemicals and eight additional ones, from 2020.

Integration of Conventional and Alternative Medicine

We’re excited to see an increasing amount of integration between conventional and alternative medicine and doctors from each category being willing to work together. Specifically, we’re even seeing research about concepts from traditional Chinese medicine being used in conventional cancer treatment:

Yung-Chi Cheng, a pharmacology professor at Yale School of Medicine, worked on studies to help reduce side effects of chemo for cancer patients. He realized that those who finished treatment lives longest, so he figured that if they could increase the number of patients who didn’t discontinue treatment because of side effects like nausea and digestive problems, more people would survive. He used traditional herbs used in Chinese medicine to help these patients and while more did finish treatment, he noticed another side effect: their cancers shrunk faster than those who didn’t.

This has led to a potential cancer treatment based on Chinese medicine called PHY906 that shows promising results.

Thanks to some new breakthroughs we’re learning much more about the amazing placenta. Researchers think this new data will give them an early window and possible way to help at-risk pregnancies and create new tests to help detect and remedy problems early.

From the article here:

In addition, at a recent meeting in Bethesda, Md., of the Human Placenta Project, several teams of researchers showed off sophisticated new techniques that enable the placenta to be studied in real time. That work could help doctors diagnose dangerous complications in pregnancy — including pre-eclampsia (a form of high blood pressure), preterm birth and fetal growth restriction — early enough to intervene. It might also help to reveal why boys are much more vulnerable than girls to disorders of brain development, including schizophrenia, A.D.H.D., autism, dyslexia and Tourette syndrome.

Did you enjoy this episode?
Please drop a comment below or leave a review on iTunes to let us know. We value knowing what you think and this helps other moms find the podcast as well.

This podcast is brought to you by Thrive Market. I’ve been using this company for years, ever since they first opened and I know many of you have been too, but I wanted to make sure you know about a couple things that make them even more awesome. First, they have a really easy to use app that makes ordering easy. I use this all the time… download and try it out. Second, they have a bunch of secret free gifts with purchase for members only! I check back a few times a week because they’ve had some of my favorite things as a free gift with purchase. My strategy is to add things to my cart in the app as I think of them or as we run out, then once I hit the threshold for free shipping and the free gift, I order when its a gift that I would use. And finally, make sure to check out the Thrive Market brand when you’re on the app or website. They now have their own line of really high quality products at really great prices. This is now my go-to for pantry staples like grain free flours, baking soda, nuts, etc and for sardines, tuna and canned goods and even for diapers. Find out more about all of these and get an extra discount on your first order at thrivemarket.com/katie

This episode is sponsored by Crunchy Betty products. Here’s a secret- while I have a post about making my own deodorant, I haven’t actually done it in a couple of years because I found Crunchy Betty Kokomo cream deodorant and realized it works just as well, it doesn’t cause irritation and is made by a small family business, which I love. It smells like the tropics and one small jar of this deodorant lasts for months! I love that it uses minimal (recyclable) packaging and because it lasts so long, there’s virtually no waste! For me, it completely stops any odor and keeps me fresh all day, even when working out! So many natural deodorants cause irritation and this one doesn’t. Check it out on at etsy.com/shop/crunchybetty or grab it on Amazon at CrunchyBetty.com/WellnessMama.

222: Mike Salguero on How ButcherBox Is Bringing Back Grass-Fed Meat
Next Post:224: Dan Clark on Using Sound & Music to Optimize Focus and Sleep