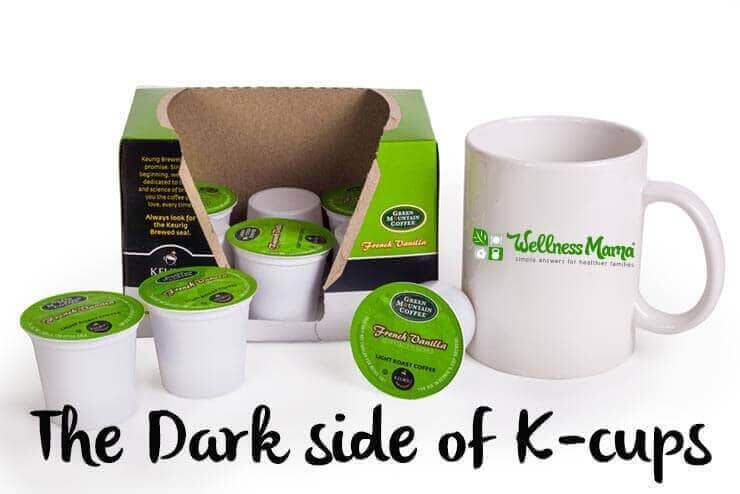 I love coffee, though not for the caffeine… I just enjoy the taste. The research is divided on the reported health benefits of coffee, but those who tolerate it can generally drink it in moderation without a problem.

Coffee is a multi-billion dollar industry that has changed drastically in the last decade (and unfortunately not because coffee drinkers are moving back to real french press coffee makers).

The Rise of The Coffee Pod

Over the last decade, coffee pods have become increasingly popular for their convenience and novelty.

Though their inventor, John Sylvan, regrets creating them, and says he originally designed them for office use only, coffee pods (often called “k-cups”) are now a common fixture in many kitchens around the world.

An estimated 30+% of American households have a Keurig or similar coffee pod machine, accounting for an almost 5 billion dollar market last year.

Certainly, I can understand the appeal of an at-your-fingertips 24/7 coffee maker, but as most things that seem too good to be true… coffee pods have a dark side (and it isn’t just the dark roast they hold).

The Problem with K-Cups and Coffee Pods

There are several problems with coffee pods they you may not be aware of. They include:

One of the reasons John Sylvan regrets creating K-cups? The environmental repercussions.

Coffee pods generate massive amounts of plastic waste each year. They are not biodegradable or recyclable (though some companies have started making biodegradable options).

So why is this such a big deal?

Last year, enough k-cups were sold that if they were placed end-to-end, they would circle the globe 10.5 times. And that is just the amount sold in one year! (source)

In fact, almost 10 billion individual coffee pods were sold in the last year and that number seems to be rising.

Some of the newer generation k-cups are recyclable, but you have to take them apart and separate the plastic, compost the coffee grounds and dispose of the top. Plus, most people aren’t even aware that some of them are recyclable.

With the rising levels of BPA and other plastic chemicals found in our groundwater, ocean water, and even buried under 30 feet of ice at the south pole, experts warn that these chemicals may be contributing to the rising health problems we are seeing worldwide.

Coffee pods alone are a significant source of plastic chemicals in landfills, and unfortunately, the their popularity only seems to be growing. This prompted one video team to make an exaggerated video encouraging people to “kill the k-cup:”

Warning: The video has some strong language so you might want to use headphones if kids are in the room. 🙂

Of course, this video is overly-dramatic, but it demonstrates the point that even those of us who don’t use k-cups are affected by the plastics being put into the environment.

To be fair, Green Mountain (who owns Keurig) announced plans to make their coffee pods recyclable by 2020, but that still means billions more plastic cups will enter the landfills in the next five years, and even if/when they are recyclable, many people won’t recycle them.

They are plastic, so all the usual problems associated with consuming foods or drinks in plastic containers apply, but are actually intensified because hot liquid is used, allowing more plastic chemicals to transfer into the coffee.

The plastic chemicals like BPA, BPF, BPS and Phthalates are known endocrine disruptors and may contribute to hormone imbalance, weight gain and fertility problems. Though Keurig recently confirmed that its pods are BPA free, they did test positive for estrogenic activity and may also contain polystyrene, a possible carcinogen.

The top of these k-cup coffee pods is usually made of aluminum, which has some health concerns of its own and which may be bad for the brain. Aluminum exposure has been linked to Alzheimers, depresion, anxiety, autism and even autoimmune disease.

The instruction manual of these machines states that once filled with water, the internal tank and lines cannot be drained, creating a perpetual dark, warm and moist environment.

These molds and biofilms bring their own health concerns and are almost impossible to eradicate. Hot water is not enough to kill them, nor is the acidity of coffee. Some sources recommend running several cycles with diluted vinegar, but lab testing has shown that this is not enough to remove the mold and biofilms.

To be fair, this problem is not limited to single-use coffee makers. Almost all coffee makers can be a source of mold and biofilms, and even 50% of coffee mugs tested contained mold spores or even fecal bacteria.

If the health and environmental aspects aren’t enough to convince you, individual coffee pods are an absolutely horrible deal.

Of course they are convenient, but with as little coffee that is in each pod, a pound of coffee would cost over $50!

Even the highest quality single-sourced organic coffees don’t usually cost this much, and many of us pay that for low-grade, plastic and aluminum coated, environment wrecking pods!

If budget is an issue, these should be the first to go!

K-cups and Coffee Pods: The Solution?

Don’t buy a coffee pod brewing machine. If you have one, get rid of it.

Sure, the convenience can’t be beat, but they aren’t worth the health, environmental and financial downsides. Increasing levels of plastics in landfills is becoming a massive global issue, and this is one major source.

Of course, I’m a coffee drinker and I’m not advocating avoiding coffee, just brewing it in an environmentally and health conscious way (that also tastes much better, for the record). If you absolutely can’t part with your Keurig, at least consider buying biodegradable options like these that can be composted (bonus: they are cheaper too!) or using a reusable pod.

K-cups take about a minute to brew, and my eco-friendly and much healthier version only takes about two minutes… plus, the taste is absolutely worth the extra minute of prep time.

I use a glass electric water kettle and a glass and stainless french press for coffee brewing.

I heat the water to almost boiling in the electric kettle. This takes about 30-seconds. While that is heating, I grind fresh organic coffee beans and place them in the bottom of the french press.

(Or, if you’re like my Italian husband who prefers espresso, get an old school stainless stove-top espresso maker.)

Confession: I did at one time have a coffee pod brewing machine. I used reusable pods or biodegradable ones, but after researching the various health and environmental problems with these machines, I returned to our beloved french press and could not be happier.

Are you a coffee drinker? How do you make it?

An Easy 3-Step Approach for Healthy Teeth (Without Flossing)
Next Post:What is Floating? Sensory Deprivation Benefits