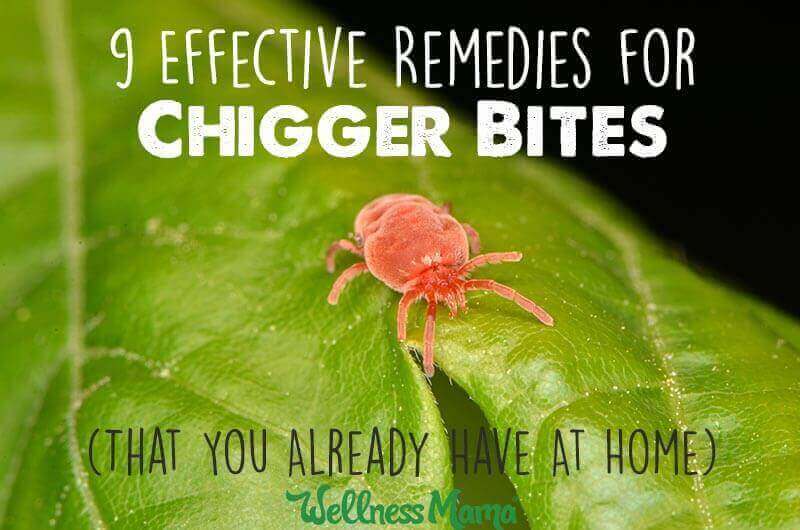 9 Effective Remedies for Chigger Bites (You Have at Home)

Ticks, chiggers, and lice… oh my!

These critters are some of our least favorite, and for good reason.

Imagine for a moment that there was a tiny monster from the same family as scorpions and spiders. It was so tiny, in fact, that you could barely see it without a microscope. Yet, this tiny creature was capable of causing insanity-inducing itching by spitting on your skin.

These creatures exist and while the name “chigger bites” are a misnomer, these horrific little creatures can certainly cause intense itching with their spit. Read on to find out what you can do to avoid them or get rid of them (and the old nail polish trick won’t help!).

Their scientific name is Trombiculidae or trombiculid mites. You may hear them referred to as chiggers, harvest mites, mowers mites, harvest lice, red bugs, berry bugs and a host of other names. They are so tiny that you almost can’t see them without a magnifying glass or microscope. Chiggers tend to congregate in shady areas with a lot of vegetation and can be found in fresh cut grass, tall weeds, overgrown and wooded areas.

One female can lay hundreds of eggs, and once hatched, they all tend to stay in the same area. For this reason, you may encounter hundreds of chiggers in one general area and not find any just a few yards away. Full grown, these tiny mites (that are cousins of scorpions and spiders), measure only 1/150th of an inch, making them very difficult to see or avoid.

If you’ve ever had a run-in with these little guys, you are probably well aware of the uncomfortable affects they can cause. They leave itchy welts sometimes called chigger bites, though in reality, they don’t bite at all.

Chigger Bites Are Not Bites at All…

The itchy welts left behind by these little red mites are commonly called chigger bites, though they aren’t actually bites at all.

A chigger larvae can attach itself to a human host, though it isn’t biting. It may latch on to the skin, which a person won’t even feel due to its small size. Contrary to many assumptions, don’t lay an egg in the skin or even bite the skin.

Instead, chiggers drill microscopic holes into the skin with their mouth and then secrete specialized salivary enzymes (aka- spit) onto the skin. See… not technically a bite (I know, I know, too-may-toe, to-mah-toe).

These enzymes cause the skin to break down, so the chiggers can essentially slurp up the decaying skin through a straw-like tube. Disgusted? I was too.

Many insects and plants can cause an itchy red rash so it can be tough to know if it is actually chiggers or something else. Here’s what to look for to know if you’ve been attacked by these pesky larvae:

Our Experience With Chiggers

I vaguely remember getting chiggers a few times as a kid, but we recently had an experience with them that trumped any of my past experiences.

On our family camping trip, all of our kids were exposed to chiggers. They didn’t notice them the first day, but by the next morning, their legs were covered in itchy red welts.

Normally, this wouldn’t be a big deal, as chiggers aren’t dangerous and don’t transmit disease (that we know of). But the itching was so bad that it kept the kids up at night and I was afraid they would end up with scars all over their legs from scratching.

Since I was hoping to eventually sleep again, I started researching ways to get rid of these itchy bumps. I even called a local entomologist for some professional recommendations.

Thanks to my six more-than-willing test subjects, I discovered natural remedies that work for chigger bites (and many that don’t). But first, here’s what didn’t work:

If you’ve ever experienced the awful itching caused by chigger larvae, you know that you’ll do almost anything to make it stop. Thanks to our recent chigger infestation, we had plenty of opportunities to test natural remedies for the itching. These are the remedies that actually worked:

The best way to stop chiggers is to get rid of them before they attach and start spitting on the skin. This avoids the itching completely. I think this is also the reason that the baby and I were least affected by chiggers. It can take chiggers a few hours to find a place to latch on to skin and start drilling. If you can remove them during this window, you can often avoid the problem completely.

Our family was exposed to chiggers on a recent camping trip. We were camping close to town, so when our two youngest kids got grumpy, I brought them home, gave them a bath and we slept in our own beds. I also showered that night, and in the morning, all three of us all had only 1-2 bites each. The rest of the kids and my husband stayed overnight and had dozens of itchy bumps.

If you think you may have been exposed to chiggers, a hot shower within the first hour or so can help remove them from the skin. Obvious other steps like using soap and scrubbing the skin can help too.

These work best shortly after exposure but can help even once the severe itching sets in. It is also super simple. Just make a paste of equal parts baking soda and water and rub on skin in the shower. Leave on for a few seconds before showering off.

Fair warning- this will sting like crazy, but it really helps stop the itch and beats staying up all night itching.

3. Rub Salt in the Wound

Just like the baking soda solution, this will sting, but it helps. The traditional advice is to mix some salt into some vapor-rub. I’d recommend using a natural or homemade vapo-rub salve instead (like this one) to avoid the petroleum byproducts though.

The theory is that the menthol in the vapo-rub helps calm the itching and the salt helps neutralize the spit causing the itch.

Whatever the science, this seemed to work the best. I mixed some Real Salt into my pre-made vapor rub and it offered some relief for the kids.

A salt water and herbal tea spray also seemed to help. I made a strong chamomile tea and added a few tablespoons of natural salt. I kept this in a glass spray bottle in the fridge and it offered some cooling and calming relief for itching.

This is an old remedy that the entomologist suggested. It seemed to work, though it wasn’t the most effective remedy we tried. If you have castor oil around it could be worth a try though. We dabbed small amounts on the bumps and it did offer some itching relief.

A remedy I tried before I realized that chigger bites are not actually a chigger larvae embedded under the skin as is often claimed. Still, this worked remarkably well. My theory is that it does kill any remaining chiggers and dries out the bumps to reduce the itching.

I’m also now using this as a preventative measure. Diatomaceous earth has many uses and can kill many small pests naturally. I’ll be sprinkling it in our socks and on our boots next time we camp!

Many sources also recommend using Calamine lotion to calm the itch. I didn’t have this on hand but did have my homemade natural itch cream, which worked like a charm. Either of those should help calm the itch.

Mix 1/4 cup aloe vera (fresh or gel) and a drop of peppermint essential oil. Rub over skin to soothe the itching.

We found that all of my detox baths seemed to calm the itching, but a plain magnesium or epsom salt bath worked best. Add 1 cup of epsom salt or magnesium flakes to a warm bath. Don’t have those? Try just adding some baking soda instead of making the paste above.

How to Never Get Chigger Bites Again

All of that insatiable itching could be avoided by not getting chigger bites (spit) in the first place. My first gut reaction was to ban my children from camping and hiking until first frost. Some research led to a more balanced solution and we are taking these steps to avoid another run-in with chiggers:

Ever had chigger bites? How did you survive?