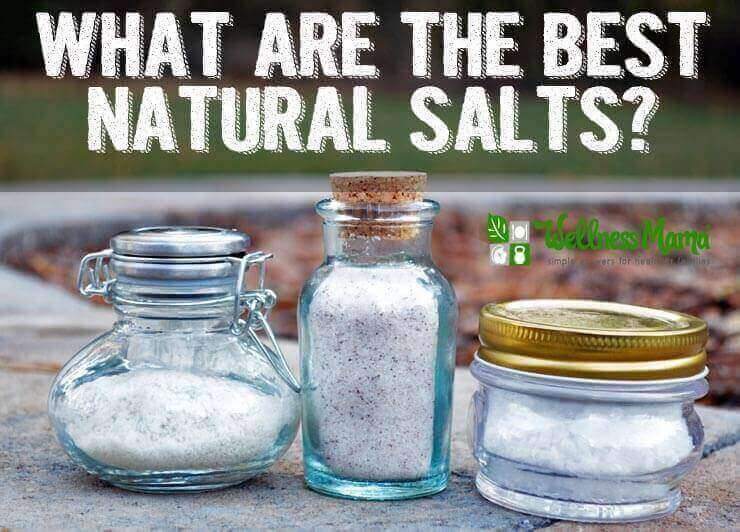 What is the Best Type of Natural Salt?

Wellness Mama » Blog » Natural Home » What is the Best Type of Natural Salt?

Salt is often a hotly debated topic in the natural health community. It was literally once worth its weight in gold, and now added dietary salt has come under scrutiny in the health and medical communities.

The problem with the advice to avoid salt is that studies about salt intake almost all use basic chemical table salt (NaCl). Research definitely supports avoiding a concentrated chemical source of salt like table salt, but when it comes to natural forms of salt, the research is not so clear cut.

There seems to be a golden ratio for salt consumption based on the research, and it is actually higher than the current RDA and the current US average consumption. In fact, the Japanese (and several other cultures) consume much more salt than Americans and have lower rates of the problems often blamed on salt intake (high blood pressure, heart disease, etc).

According to research, there exists a range of sodium intake that likely confers the best health outcomes for most people. As I explained in part 3, findings from a 2011 study demonstrate the lowest risk of death for sodium excretion between 4000 and 5990 milligrams per day. (1) Sodium excretion greater than 7000 milligrams or less than 3000 milligrams per day was associated with a higher risk of stroke, heart attack and death. This lowest risk range equates to approximately two to three teaspoons of salt per day.

It is important to note that this golden amount of 2-3 teaspoons includes added and naturally occurring salts in foods like seafood. For most people eating an unprocessed diet, this amount is usually achieved naturally by eating a real food diet high in green vegetables and salting food to taste.

It is also important to note that consuming too little salt carries its own share of problems:

While salt-induced hypertension is typically blamed as a cause of heart disease, a low salt intake is associated with higher mortality from cardiovascular events. A 2011 study in the Journal of the American Medical Association demonstrates a low-salt zone where stroke, heart attack and death are more likely. Compared with moderate sodium excretion, there was an association between low sodium excretion and cardiovascular (CVD) death and hospitalization for coronary heart failure. These findings demonstrate the lowest risk of death for sodium excretion between 4 and 5.99 grams per day.

The majority of modern day salt intake (in the US) comes from processed foods. It is impossible to separate this salt consumption (which is the processed chemical form anyway) from the other chemicals, vegetable oils, and sugars found in processed food.

The Type of Salt Matters!

The fact that obesity and heart disease rates have risen over the last five decades while salt intake has remained the same suggests that if salt intake does affect cardiovascular and overall health, it doesn’t affect it in the way we thought. Real natural salt is a source of many minerals as well as just sodium and chloride, and there is a biological need for these minerals in specific ratios.

So is there a biological need for salt, and can it be fulfilled with a no-salt added diet? From Kresser again:

Not surprisingly, the move from a hunting-and-gathering diet to one consisting largely of grains and vegetables necessitated the procurement of supplemental dietary salt. Humans, like many carnivores, can meet their salt needs by eating meat and seafood, provided they do not sweat excessively. For example, the Masai, nomadic cattle herders in East Africa, can easily obtain adequate dietary salt by drinking the blood of their livestock. In modern and historic hunter-gatherer societies, it has generally been found that hunting tribes do not make or trade salt, unlike agricultural tribes, and once humans began cultivating crops, their dietary need for salt increased.

So perhaps modern diet precipitates our need for additional dietary salt. That being said, not all salts are created equal and I think it is vitally important to do your own research on salt and to consume it in proper ratios with other minerals and vitamins.

Many modern low-salt or “healthy salt” products are using potassium chloride in place of sodium chloride, which seems to be much more dangerous long-term (but which is a topic for its own post).

It is important to note the difference between naturally occurring salts and isolated NaCl (table salt- sometimes with iodine added). In general, what we just call “salt” can be one of three types: Table salt, Sea Salt or Rock Salt.

Table Salt is the salt you find on restaurant tables and on processed food. It is an industrial product made in factories and heated to over 1000 degrees. Often, aluminum hydroxide (an anti-caking agent) and other chemicals are added, along with iodine (which has its own cautions and which should be consumed in natural sources in ratio with selenium).

This is the salt often used in studies about sodium consumption. Large amounts of these elements in isolation, especially with added iodine, which can potentially lead to thyroid problems, may be causing more harm than good. In fact some research is exploring the possibility that sodium chloride in isolated form could be one of the factors in the increase in autoimmune disease in recent decades. (source)

This type of salt is also devoid of the natural minerals found in naturally derived salt.

As the name suggests, sea salt is salt mined from the sea. It is higher in minerals than table salt, and considered a more natural form. There are many variations of Sea Salt and the quality varies greatly. I’ve used Celtic Sea Salt and Real Salt. Both have a wide range of trace minerals.

The only cautions with Sea Salt are to not consume dead sea salt (too much bromide) and to make sure all sea salt comes from an un-contaminated source.

Himalayan salt is a type of rock salt mined from ancient salt beds in the Himalayan mountains. Since these salt beds are ancient an dried, they don’t have the contamination risk of modern sea salts and contain dozens of other trace minerals. From here:

This is the type of salt our family uses most often and I buy it in bulk. I consider this the gold standard of salt and consume it regularly.

Biological need for salt varies by individual depending on age, activity level and health conditions. Always do your own research and check with a medical professional, especially if you have any medical conditions.

Natural salt doesn’t deserve the bad reputation that table salt has earned it, but it does need to be consumed in ratio with other minerals like magnesium and selenium and as part of a varied, nutrient-rich, real-food diet.

Ever notice how awesome your skin feels at the beach? The natural minerals in salt can be great for skin. Here are some ways I use salt externally:

Kresser: Shaking Up the Salt Myth and The Dangers of Salt Restriction and Healthy Salt Recommendations
Book: Salt: A World History
Wellness Mama: Are You Scared of Salt?

How do you use salt? How much do you consume? Join the conversation below!

How to Get Real Food at Wholesale Prices with Thrive Market
Next Post: Three Kings Lotion