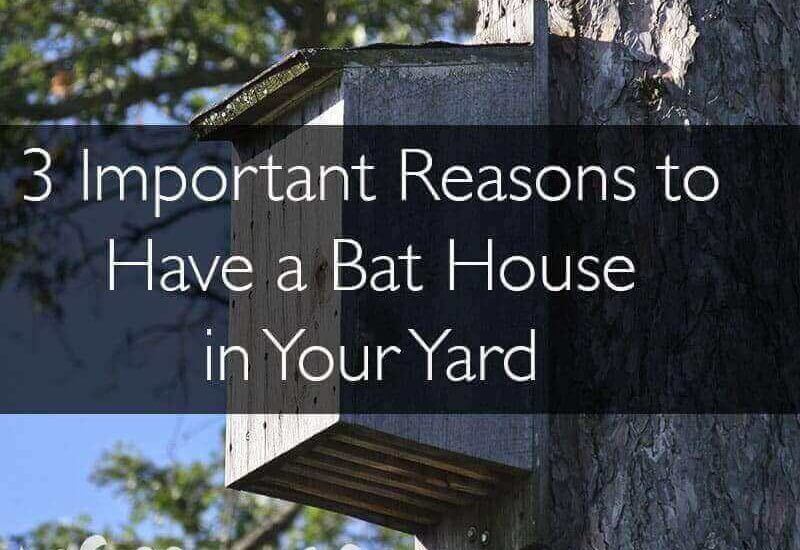 For many people, visions of bats may conjure up creepy ideas of bloodsucking rodents (they aren’t rodents). We live in an area with a lot of natural caves and a lot of opportunities to learn about bats and how they influence our environment. If you’ve never thought about trying to attract bats to your backyard, or considered building a bat house, there are a lot of reasons you may want to!

When I think of little furry creatures flying around in my backyard, I typically think of honey bees. But did you know that bees aren’t the only pollinators around? Not only do bats help with pollination, but they provide a number of additional benefits for your backyard.

3 Reasons You Want Bats in Your Yard

Here are three big reasons we need to stop thinking of bats as creepy and start inviting them into our yards:

Like bees, bats are attracted to the nectar in plants. You can think of bats as the “night shift” pollinators.

These nocturnal creatures become active when the sun goes down, and work magic in your garden while you snooze. They go after the nectar and bugs, spreading pollen as they swoop and dive.

Lots of plants are dependent on bats for pollination, including tropical fruits like bananas, mangoes, and guavas, and, more importantly, the agave plant, necessary for making tequila (bats are the sole pollinators of the agave plant). (source)

So, whether you’re into tropical fruit or tequila (no judgment here either way), bats have an important job.

No matter if you want some help in your veggie garden or with your prized azaleas, you should put a bat house in your backyard.

Bats are most commonly found pollinating plants in tropical and dessert climates, and in the springtime, can often be seen in Arizona, New Mexico, and Texas. (source)

2. Bat Poop is the Bees’ Knees

Flying rodent poop. I know: ew. But bat poop, called guano, is actually an important factor in the global ecosystem, and, in turn, the global economy.

Guano is a rich source of fertilization, and is superior to other natural and organic fertilizers, because bat guano:

Not only does guano act as an amazing fertilizer, it also helps to distribute seeds, which is especially helpful in places where natural vegetation has suffered due to man’s interventions. When the bats eat fruit, the seeds are then spread later in the guano, which contributes to a strengthening of a natural, global ecosystem.

According to Bat Conservation International:

Vast expanses of the world’s rainforest are cleared every year for logging, agriculture, ranching and other uses. And fruit-eating bats are key players in restoring those vital forests. Bats are so effective at dispersing seeds into ravaged forestlands that they’ve been called the ‘farmers of the tropics.

It’s estimated that up to 95 percent of new growth in these areas can be attributed to the seeds dropped by bats. (source)

Suffice it to say, you want bats pooping in your garden.

3. Bats Cut Down on Mosquitoes and Other Bugs

No matter the season (but especially in spring and summer), there always seem to be pesky bugs around, particularly if you live in warmer climates. Insects can be both bothersome and harmful, but thankfully, bats can help with that.

If you’ve ever grown your own garden, you know how difficult it can be to combat bugs, particularly if you are committed to avoiding harmful pesticides. Bats eat the bugs responsible for wreaking havoc on your garden.

Many bat species eat vast amounts of insects, including some of the most damaging agricultural pests. In the U.S., bats help significantly to cut down on the population of an insect called the “corn earworm moth,” which is known for damaging a number of commercial crops. In fact, it’s estimated that in the United States alone, bats save farmers more than $3.7 billion a year thanks to reduction in crop damage and pesticide use. (source)

And if you find yourself wondering why mosquitoes buzz in people’s ears, you’ll be glad to know bats can help with that too. Mosquitoes are a particular favorite among bats, some of which are said to eat up to 1,200 mosquitoes in one hour! That alone should be reason enough to put a bat house in your backyard. (source)

To cut down on annoying pests, put a bat house in your backyard.

How to Attract Bats to Your Backyard

There are a few things you can do to encourage bats to loiter near your home. Consider trying a few of these bat-pleasing tricks.

Build (or Buy) a Bat House

The National Wildlife Federation says “Your goal is to make a bat house that mimics the space between bark and a tree trunk.”

The basic gist is that you’re building a tall, thin, box made from dark-stained plywood, with a roof and an opening at the bottom. A bat house should be divided inside by a piece or two of the plywood in order to create long, thin spaces for the bats to burrow in. You should mount a bat house 12-20 feet off the ground, attached to a secure pole or building, and secured away from predators.

If you’re not into DIY, you can purchase a bat house inexpensively. Here are a few good options:

While we may worry about dead trees being unsightly, if they aren’t a safety concern, they’re a perfect spot for bats to burrow.

Bats hide behind loose bark and in cracks on dead trees, where they can roost together and form colonies. These colonies can range in size from just a few bats to hundreds, depending on the amount of space the tree provides.

Trees make a perfectly protected refuge for bats and also attract insects which the bats can eat.

Bats are attracted to light-colored, fragrant plants that bloom at night. Some plants that will help attract bats include:

Cinnamon, eucalyptus, and peppermint are said to repel bats, so avoid using those in your garden.

Ready to Get a Bat House in Your Yard?

Are you convinced to invite bats to take up residence in your backyard? Hopefully you’re seeing these fascinating creatures in a whole new light.

Putting up a bat house is as simple as a quick construction project or inexpensive purchase, and a few thoughtful plants, and you’ll have the winged weasels pollinating, fertilizing, and cutting down on insects in your garden in no time.

Do you have bats in your backyard? Share this post with a friend who could use some bats flying around their home!