Just about every organic gardening book or blog advocates the benefits of companion planting in the garden. In fact, I’ve written before about plant pairs whose natural properties work together in the garden to reduce pests and boost plant health (without chemicals!).

So, you start picking out what you want to grow in your garden this year and search “companion planting chart” on Google. And you get a few results that look something like this (courtesy of the Garden Stamp): 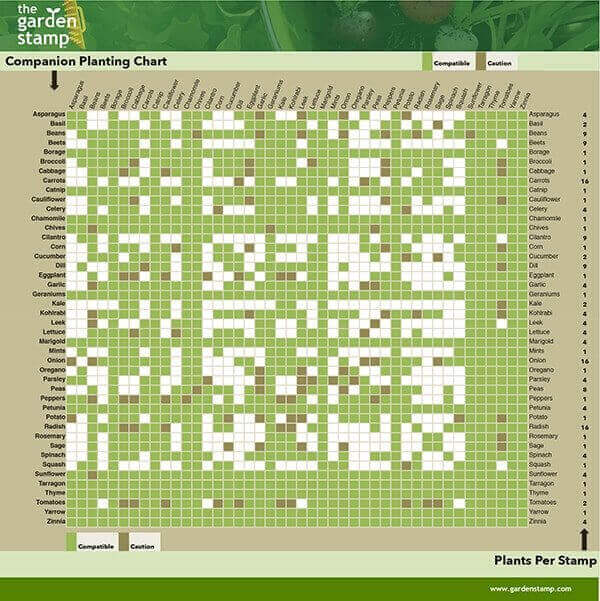 After much time and much study of multiple conflicting charts (with the help of a magnifying glass maybe), you eventually figure out a plan that works (you think) and eagerly start planting your soon-to-be flourishing organic garden.

Then you realize… the tomatoes are right by the potatoes (and the chart says they do not get along!). Once the peas are done you won’t be able to put in beans because they’re right by the garlic… which the chart assures you will be a disaster!

Sigh… Gardening was supposed to be fun, right?

So what’s an organic gardener to do? And is companion planting really worth all the hassle?

While countless gardening experts swear by the practice and have written whole books on the subject, many horticultural experts consider companion planting garden “folklore” rather than science.

It is true that many of today’s recommended plant pairings are not confirmed by formal scientific study. Most plant associations came to be through historical observation: (i.e., Farmer Joe observing that his crops came in better when tomatoes and eggplants were planted in alternate rows).

Also, a series of “sensitive crystallization” studies on plant pairings in the 1960s left a stain on the theory of companion planting. The mainstream scientific community rejected this method and its findings as pseudo-science. The goal was to discover which plants “liked” each other by examining the crystal formations left after evaporation of plant extracts mixed with various solutions. (1)

The Science of Companion Planting

Still, today some of the most highly regarded horticultural organizations in the U.S. promote the idea of companion planting, within limits. Cornell University’s Horticultural Factsheet on the topic points out its foundation on a long, indisputable history:

Naturalists have known about these properties of plants for thousands of years. For example, about 2,000 years ago the Roman agriculturalist, Varro, declared “Large walnut trees close by, make the border of the farm sterile.” Chemicals in oak leaves retard the development of insects that feed on them… Alfalfa and clover enrich the soil with nitrogen that they capture from the air. Certain trees move groundwater to the soil surface where shallow-rooted plants can grow even under droughty conditions. Groups of plants which grow well together are called “companions. (2)

Experts argue that companion planting seems to work for so many because of this “yin and yang” relationship found in nature. Rather than planting all of the same crop in a large area (picture the typical cornfield), commercial (and backyard) growers see improvement when they imitate the diversity found in the natural world, alternating rows with a complementary crop.

This theory of non-competition between plants with differing needs is now called “intercropping” and has gained widespread acceptance in mainstream agriculture. Deep-rooted plants can grow with shallow, or tall plants with low-growing ones that needs shade, or slow-maturing plants that are fast-maturing. Plants in the same space with different needs suffer less competition.

Unlike the lore of companion planting, intercropping has been shown to work on a home garden scale. Originating in tropical climates like Africa, understanding the niches plants grow in and how you can combine them together in limited space and resources has a long history. Intercropping has three major advantages: 1) Reduces physical space needed 2) Reduces potential for widespread crop failure since a pest or disease is unlikely to decimate both crops 3) Can reduce resource use like water and fertilization needs. (1)

But call it what you will, how can you apply the theory to your backyard garden?

Understanding the basic reasons why companion planting (or intercropping) works removes the need for complicated charts and lists. Knowing the goal, you can relax and enjoy the grand experiment of gardening!

Imitate nature. Experiment with breaking away from uniform rows of the same crop in a concentrated area. Intersperse carrots and onions, for example, or plant basil under tomatoes.

Add flowers to attract pollinators and helpful predators like wasps and ladybugs. Add herbs to confuse pests with a variety of scents. Use fast-growing lettuces and radishes as a living mulch around slow-growing plants like tomatoes and cabbages.

Constantly replenish bare patches left after mature plants are harvested. Late in the season, choose sections of the garden to “rest” by growing a nitrogen-boosting patch of field peas or clover to till into the soil the following spring.

2. Use the Rule of Opposites (Complementarity)

With just a little research (and better yet hands-on experience over the years), you can get to know which plants are shallow-rooted and which are deep-rooted, which are heavy feeders or light feeders, which are slow-growing or fast-growing. As a general rule, pair these together.

Another example of opposites at work: plant climbing vines like pole beans with tall, sturdy plants that can provide a vertical structure, like sunflowers. Double duty!

3. Keep it in the Family

Learn your plant families and keep related plants together in the same “neighborhood” of the garden. Related plants generally get along (with one or two exceptions) and have similar needs and pest threats. This way you only have to learn the characteristics and needs of each family instead of those of each individual plant.

While this may not seem like the best way to create a diverse garden (point #1 above), working with family neighborhoods brings simplicity to the companion planting process. With just a few notes for reference, you will know important facts like:

This approach also makes crop rotation a snap when the time comes for succession planting, as you can easily rotate the family neighborhoods so you don’t sap the soil or encourage pest problems in one spot.

Of course there are a few exceptions to every rule. Never put your potatoes near your tomatoes, even though they are in the same family!

For more on this concept, I recommend Sally Jean Cunningham’s book on garden neighborhoods and companion planting.

More than anything, don’t worry too much about the list of dos and don’ts. Generally companion planting won’t make or break your garden, but, taken in the right direction, will contribute to a healthy biosystem.

Be willing to learn about your plants’ general characteristics. Observe, experiment, and record the results for next year’s planning. You will quickly build hands-on experience that far outweighs the knowledge any book or website could give you, and soon you’ll be companion planting with confidence!

Do you use companion planting in your garden? What has worked for you? Hand on your gardening wisdom by sharing your tips!

310: Can Our Soils Heal Us? How Regenerative Agriculture and Home Gardens Can Improve Our Health

Organic Gardening 101: How to Start Your Own Backyard Garden