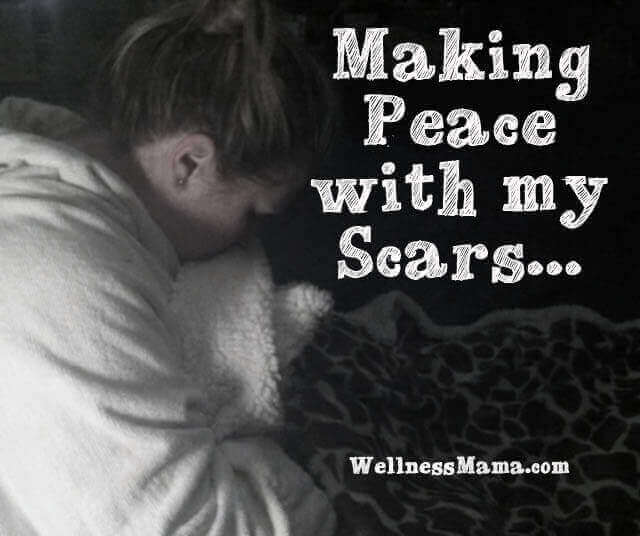 Making Peace With My Scar

Almost four years ago, one day changed my life drastically and in an instant…

The events of that day pale in comparison to the challenges of many others, but it rocked my world in multiple ways.

At that time, I was 35 weeks pregnant with our third child and planning a home birth. I’d had all the ultrasounds and everything looked great. I’d been meticulous in my diet and self care and was preparing for a home birth in every way possible, including reading over 40 books on pregnancy and birth.

I’d had a natural birth before, and in my (arrogant) mind, I was good at this whole birth thing. In my head, I pictured a serene water birth with candles lit and essential oils in the air. I barely glanced over the pages about c-sections in any pregnancy books because that part didn’t apply to be. I was a doula, a natural birth mom, I didn’t have c-sections.

That day, I had felt antsy but chalked it up to normal pregnancy nesting. We had a picnic dinner with friends and I noticed I was uncomfortable sitting on the ground, but at 35 weeks pregnant, this was to be expected.

We finally headed home late that evening and I put my little ones to bed. My husband and I talked for a little while and turned in ourselves around midnight.

Around 2 am, I heard a door open and my son was getting up to go to the bathroom. He was still newly potty trained, so he came in to my room and asked if I could help him.

As I went to sit up, I felt a warm gush and immediately though, “oh no! My water broke and it is too early!” Thinking this was what was wrong, I ran to the bathroom and realized that it was blood, not amniotic fluid that was everywhere. Our bathroom looked like a murder scene and I was still gushing.

I yelled for my husband and we called the midwife. No answer.

With no one local to call, we started putting the kids in the car and heading to the nearest hospital. I wasn’t sure what was going on at this point but I knew it wasn’t good. The bleeding had slowed a little but I was feeling light headed from the blood loss. We finally got in touch with a friend who agreed to come to the hospital and get the kids.

When we got to the hospital, my husband dropped me off at the door and parked so he could bring the kids in. They started running tests and called in an ultra sound tech who had been sleeping.

I overheard the doctor talking to the nurses and the words “placenta previa” were mentioned. I knew what this was, but hadn’t read much on it because “Those high risk categories didn’t apply to me.”

The ultrasound tech got there and as soon as he put the wand on my stomach, I could tell what the problem was immediately. There was a big healthy looking placenta… right over my cervix.

I knew enough to know two things: (a) I was having this baby a lot sooner than I’d planned and (b) it wasn’t coming vaginally.

Ever heard that saying about how to make God laugh? Well, I’d told him my plans, but hadn’t considered that things might not go according to my plans.

I didn’t have anything ready for the baby to come. I didn’t have clothes down from the attic. No one was in town. And I was scared.

The next few hours as they prepped me for the inevitable c-section, my mind was racing. My main concern was that the baby was ok (the bleeding had slowed) but I was also terrified about the c-section (I wasn’t a person who had c-sections).

Being wheeled in to the operating room as my husband had to stay in the hall was one of the hardest moments of my life up to that point.

Long story short, my hubby finally got to come in as they were about to take our baby out. We didn’t know if we were having a boy or girl yet. We also didn’t have a name…. we threw out possible names and had only decided on a boy’s name when…

Two things happened simultaneously. Our baby was delivered, a boy! and the doctor said “Oh, crap” as he realized I was still bleeding internally.

Baby wasn’t breathing optimally, and I was still bleeding. My hubby left with baby as they took him for respiratory help. I got to see him for a split second before they both left. A huge team of doctors and nurses rushed in and I was given a lot of medicines at one time and everything was pretty hazy after that.

The next eight days were a blur of a painful recovery, spending time in the NICU with baby, and taking a lot of iron supplements to try to get my blood levels back up. Turns out, I was allergic to one of the medications I’d gotten and my entire body itched relentlessly, but I didn’t want to take medication to stop the itching as it would make it more difficult for my milk to come in.

I pumped like a mad woman every two hours for days until my milk came in and finally, after five days, got to hold my baby once the umbilical IV was removed. We saw so many tiny babies in the NICU, and some were struggling with much bigger problems than our little guy! We said a lot of prayers for those little ones during our time in the NICU…

Thankfully, our time with baby in the NICU was only 8 days and my recovery, though slow, was not nearly as bad as it could have been. I know that so many have had much bigger struggles with birth and recovery and especially after my experience, I have so much respect for them. Certainly, I am completely grateful that our son is now healthy and that I recovered without a problem. Though I don’t follow the thinking that “all that matters is a healthy baby,” it certainly is the most important outcome!

Until that point, I’d always loved the feeling of being pregnant and I’d loved my pregnancy body (and even post-pregnancy body). Now, I had a scar that was a permanent reminder of a delivery that didn’t go my way.

I was surprised to find that that scar, that 6 inch reminder of my c-section, bothered me a lot more than I expected. It reduced me to tears at many times. Even years later, just seeing that scar in the mirror could put a downer on my whole day.

I thought about it objectively.

I realized that I am thankful for that c-section that saved my son’s life and my own.

The reason that c-section and that scar bothered me is that it served as a constant reminder of the many aspects of life that I can’t control, and even more so, it reminded me of my arrogance and how hard that lesson was for me to learn.

I’ve always considered myself an optimistic person. I’ve been able to be grateful and happy for most things in my life. But, I also hadn’t had too many experiences that had really tested that optimism.

It took a long time, but I can finally say I’m thankful for that scar and for the lessons it represents.

Ironically, once I finally made peace with the scar (and it took years), it started to fade and it is now barely visible at all. It is funny how life works sometimes: things that we focus on and obsess about that seem like such a big deal  to overcome are barely visible when we learn to let go.

I also realized that as women, we often seem to focus on one part of our appearance that we really don’t like and let our attitude and self worth be dependent on this one thing when it is barely noticeable to anyone else.

If I ever have another cesarean, I will try to work with my doctor to have a gentle cesarean, and I’ll know to do these things to speed recovery.

Do you have scars that are a painful reminder (or a happy one!) of something in your past? Share below!