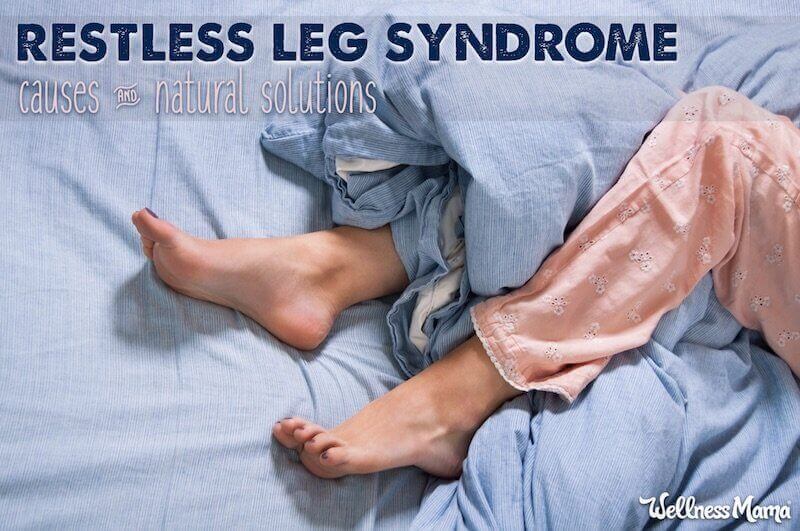 Pins and needles, itchy, creepy-crawly… these are all terms used to describe the symptoms of restless legs syndrome, or RLS.

It can be hard to put this condition into words, but for those who have experienced it, the symptoms are unmistakable. Magnesium is one natural remedy that can help, but there’s so much more to addressing this condition.

RLS is a neurological sensory disorder and since it usually interferes with sleep, it’s also classified as a sleep disorder.

As the name suggests, RLS is most commonly experienced in the legs, but can also occur in the arms or other body parts. The symptoms can range from mildly annoying to severe.

RLS sensations are often described as:

This not-fun list of symptoms is basically the body’s way of urging the legs to move and shake off the feeling (hence the name restless).

Restless leg syndrome is the worst when at rest and it’s more common in the evenings. It can prevent sleep or disturb it, which can lead to a whole host of issues.

More than 80% of those with RLS also periodically twitch and kick their limbs throughout the night, about every 15 to 40 seconds. This RLS-related condition is referred to as periodic limb movement.

All that sleep loss often leads to daytime insomnia, even resulting in depression. When left untreated, it can result in about a 20% decrease in productivity.

How Is Restless Legs Syndrome Diagnosed?

There isn’t a particular test for RLS. It is typically diagnosed by the symptoms, however other tests may be needed to rule out related conditions that contribute to it.

It depends on the person, but there are a variety of conditions and factors in RLS.

In general, more women than men develop the condition, as do adults 40 years and older. Pregnancy increases the risk, as well as certain diseases, food sensitivities, and nutrient deficiencies.

Even more strange, left-handed people are more likely to develop RLS than right-handed people. This is thought to be caused by differences in brain structure between the two groups that affect the nervous system.

Other causes may be:

Certain diseases like anemia, Parkinson’s disease, kidney failure, and diabetes can also include restless legs syndrome as a symptom. Damage to the basal ganglia, the part of the brain that causes muscle movements, has been linked with RLS. The disrupted neural pathways then cause involuntary movements.

Medications that alter brain function, like antidepressants and antipsychotics can cause RLS (even though some doctors use them to treat it). Even the more common cold and allergy medications can contribute to the symptoms. If you have bothersome leg sensations and are on medication, it’s always a good idea to ask your doctor about a possible connection.

Poor diet can also trigger RLS. Sugar depletes magnesium in the body, which in turn can cause RLS symptoms. Stimulants like caffeine and alcohol also tend to make the problem worse.

About 50% of those with RLS also have a family member with the condition, so genetics are thought to be at play here. In a paper published by the Nephrology and Urology Research Center in Iran, researchers found that Asians are less likely to have RLS, as are those in Iran compared to the US.

Many mamas experience RLS for the first time during pregnancy, but the symptoms disappear after birth. This is thought to be caused by fluctuating hormones and low levels of certain vitamins due to baby’s development using up nutrient stores.

A 2012 paper from Sleep Medicine Reviews found that out of 38 conditions associated with RLS, 95% of them were autoimmune and/or inflammatory diseases. Researchers hypothesized that an immune reaction to bacteria in the intestines or other antigens could cause RLS by attacking the central or peripheral nervous systems.

A 2011 study published in Sleep Medicine found a strong link between gut dysfunction and RLS. Sixty-nine percent of the RLS patients had small intestinal bacterial overgrowth (SIBO), compared to only twenty-eight percent and ten percent in the non-RLS control groups. Twenty-eight percent of those in the RLS group had irritable bowel syndrome (IBS), while only 4 percent in the control group had IBS.

If gut dysfunction is present, addressing bacterial overgrowth/imbalances and doing an autoimmune diet, like GAPS (Gut and Psychology Syndrome) is helpful. By fixing the gut, restless leg syndrome symptoms can improve or disappear.

Adrenal problems, like adrenal fatigue, can cause low cortisol levels in the body and even contribute to RLS. A 2008 study in the journal Neurology concluded that there was a link between restless legs syndrome and low cortisol levels. 50% of those in the study found symptom relief with the application of an anti-inflammatory hydrocortisone cream. Cold water therapy, or cryotherapy, also reduces inflammation.

How Do You Get Rid of Restless Leg Syndrome?

There are many different causes of restless legs syndrome. Like any condition, it helps to treat the root cause to bring about more than just symptom relief. Supporting the nervous system, eating the right foods, and taking certain supplements to correct deficiencies will all help address the root cause of RLS.

Prescription medications (usually anti-seizure medications) used to treat RLS do so by altering the brain’s chemistry and response to the nerve signals. The side effects of these drugs can be very dangerous. Common symptoms can range from everything from brain damage, to hallucinations, to twitching (what we’re trying to stop in the first place).

Even if these medications do help at first, the medical community suggests that the effectiveness diminishes over time.

Even many conventional doctors will recommend lifestyle changes and natural methods before resorting to prescription drugs (which usually aren’t that effective for RLS). It may take a combination of things, but getting to the root cause is the best way to treat RLS.

Magnesium may be one of the most popular natural supplements for restless leg syndrome, and it isn’t hard to see why. Unfortunately magnesium deficiency is common in our modern society due to soil depletion. Sugar, alcohol, caffeine, certain medications, and even stress can deplete our body’s magnesium stores.

Researchers have found that certain muscles in the leg function differently in those with RLS, specifically the back left of the calf muscle, and the muscle to the right of the shin bone. Proper magnesium levels help these smooth muscle fibers relax and are essential to a healthy nervous system. Too much iron can deplete magnesium though, so it’s important to not overload on this supplement.

Selenium supports dopamine function in the body, which is thought to be directly linked with restless legs syndrome. In an Iranian clinical trial, supplementation with 50 and 200 micrograms (mcg) of selenium significantly improved RLS symptoms. Both groups had good results, so researchers concluded that a 50 mcg dose would be more cost effective. Just one Brazil nut contains a full day’s worth of selenium, or about 77 micrograms.

Iron is also necessary for dopamine function in the body. Those with restless legs syndrome have been found to have too low iron levels in the brain.

About 30% of those with RLS can use iron supplements to reverse their symptoms. In a 2009 study published in Sleep Medicine, iron-deficient subjects saw a significant improvement in RLS symptoms after twelve weeks of iron supplementation. I like to get my iron from food whenever possible, but this is a good iron supplement to use when needed.

There are a few precautions though.

Too much iron can deplete magnesium, another nutrient linked with restless legs syndrome. In addition, too much iron may contribute to an increase in certain pathogenic bacteria in individuals with digestive issues. Plus, if your iron levels are too high, it can damage the heart, liver, adrenals and other organs. Some people also have a genetic disposition to iron overload called hemochromatosis, which often goes undiagnosed until there is severe damage.

If you choose to take iron supplements, be sure to follow up with your doctor to get laboratory measurements so your levels get into an optimal range.

Start by eating lots of iron-rich foods and see if you feel better. If your iron levels still test low, check with a natural health practitioner for guidance.

Known as the happy vitamin, vitamin D is important for keeping the blues at bay. This vital nutrient also plays a part in restless legs syndrome.

Some evidence indicates that vitamin D could play an important role by increasing levels of dopamine and its metabolites in the brain, as well as protecting dopamine-associated neurons from toxins. RLS has been associated with vitamin D deficiency in several studies, and disease severity has been inversely correlated with vitamin D levels.

One study found that RLS is more frequent and more severe in those with vitamin D deficiency. This also indicates that a deficiency in vitamin D has a negative effect on sleep. (I cover why vitamin D is so important and best ways to get it here.)

In one study, pregnant women with low folate levels experienced an increase in depression and restless legs syndrome. Folate is found in foods like liver, but during pregnancy I also take a folate supplement (not folic acid!) to be sure my levels are high enough.

Iron and magnesium deficiency are other common problems in pregnancy that may contribute to restless leg, so consider some quality prenatal supplements if you have these symptoms.

I haven’t experienced this problem myself, but it’s good to know there are so many options for alleviating restless legs symptoms naturally. If you suffer from restless legs, hopefully with these tips you can kiss restless legs goodbye and sleep easy!

Have you had restless legs syndrome before? What is/was your experience and how did you find relief? Leave us a comment below!

6 Ways to Get the Benefits of Massage Therapy (at Home)
Next Post: Lab Tests You Can Order From Home (Without A Doctor)