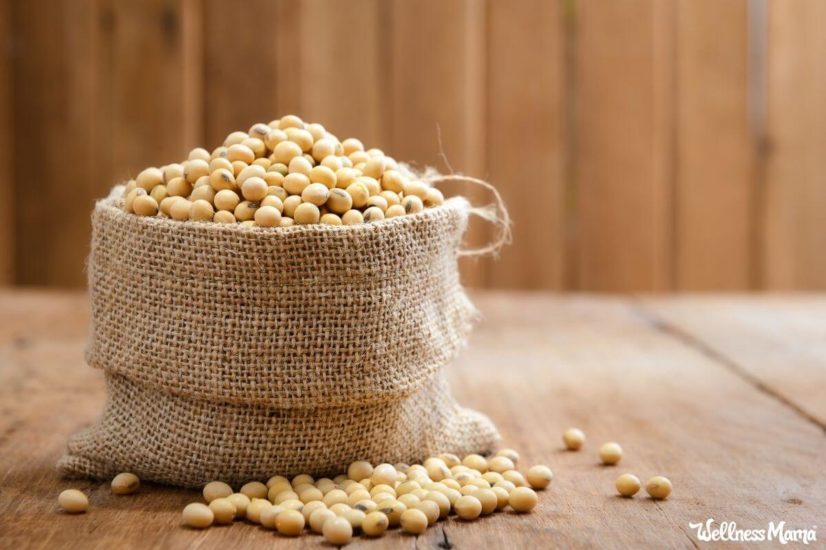 Soy is a controversial food. I’ve had many people ask me lately about various forms of soy and whether it is really healthy or not.

On one side, some experts say it has numerous health benefits for hormones and cholesterol, as well as being a vegan source of protein and fiber.

On the other side, experts say it is an allergenic food that is often genetically modified. It can also cause thyroid problems.

This post will explore what soy is, the different types of food that soy is in, and how it might affect health.

Soy is a legume, in the bean family, and is often used as a plant-based source of protein and fiber. From the raw soybean, numerous products are made. Common soy foods include:

Soy is traditionally consumed in some Asian cultures but is also a staple of the U.S. agricultural industry. According to the USDA, 94 percent of soybeans grown in the United States are biotech (genetically modified). Most soy produced in the U.S. is for animal feed, but a high volume—43 million metric tons—is exported to other countries, with China being the biggest consumer.

Soy is also found in many processed foods. Soy is one of the “top eight” food allergens and must be declared on labels if products contain any soy.

Even if you don’t overtly eat soy products, it may be found in foods with the following ingredients listed on labels:

Are There Soy Health Benefits?

Soy contains isoflavones, compounds that give soy its assumed benefits. Soy isoflavones are phytochemicals that are associated with positive effects on risk factors of breast cancer, heart disease, prostate cancer, and blood pressure. However, not all research agrees.

One of the reasons that some experts use as proof of soy benefits is how often soy is consumed in traditional Asian cultures. The assumption is that because many Asian cultures have longevity and don’t have the obesity epidemic, as we do in America, that this must be because of soy.

However, soy alone is not responsible for these health differences. Consider, for example, how often traditional Asian cultures also eat higher amounts of seaweed and seafood compared to traditional American diets. These foods also contain significant health benefits and are often eaten in higher quantities than soy foods.

If you read studies and research done on soy, you’ll sometimes find that those showing overtly positive effects have a conflict of interest. This 2016 review in Nutrients, for example, was funded by the European Soy and Plant-Based Foods Manufacturers Association. Of course those who have a financial interest in selling soy are going to say it’s healthy!

Another factor is that a lot of the research done on soy benefits are animal studies, so the benefits are not necessarily transferable to humans. Human benefits from soy consumption are still widely unknown due to animal research and research funding bias. More human studies need to be done, without conflict of interest, to really understand the potential ups and downs of soy intake.

That being said, soy is not all bad. A 2020 review in Antioxidants presents research that notes the potential for good health effects like lowering LDL cholesterol and reducing mortality from cancer, without being funded by the soy food industry.

Still, the question is: do the benefits of soy outweigh the potential risks from eating it?

While soy may have some health benefits, there are some serious risks to consider.

Antinutrients are compounds found in legumes and grains that change the way that the gut is able to absorb certain nutrients, like minerals. They can also affect the gut lining and inflammation. Antinutrients are found in soy, beans, and other legumes, as well as grains and some nuts.

Soy isn’t the staple food in Asian cultures that some Americans assume. While it is traditionally consumed, it is often used as a condiment in small quantities. When soy is eaten, it is often fermented, which minimizes the anti-nutrients that soy contains.

Soy is often promoted as an alternative food for those who have celiac disease or are intolerant of gluten, but the antinutrients that soy contains—lectins and phytates—can interfere with gut health and still cause issues. Lectins are proteins found in beans and other similar foods, and unlike some antinutrients, cooking or fermenting does not deactivate them. Anyone dealing with inflammation, leaky gut, or intestinal issues may be susceptible to negative effects from lectins.

Another problematic compound, goitrogens are substances that can interfere with thyroid function. They can block the way that the thyroid takes in iodine, resulting in decreased thyroid hormone production and conversion.

Hypothyroidism is one of the most common health conditions, where the thyroid hormone levels are too low. While Hashimoto’s, an autoimmune disease, is the biggest cause of hypothyroidism in America, inflammation and gut health problems are closely related. The antinutrients found in soy foods can negatively impact the thyroid gland in many ways.

A common alternative formula for babies with allergies is made from soy, but this is problematic for many reasons. A 1990 comparative study from the Journal of the American College of Nutrition found that infants who were fed soy formula had a higher incidence of developing autoimmune thyroid disease. While this research is considered old by today’s standards, newer research from 2004—a Cochrane database systematic review—found that soy formula should not be fed to infants at high risk of food allergy or intolerance.

Turns out, soy proteins affect the gut so much that they can take infants who don’t currently have food allergies and cause inflammatory changes that cause them. While other foods contain goitrogens, like broccoli and cabbage, cooking deactivates them. No amount of cooking or fermentation deactivates goitrogens in soy.

Soy contains phytoestrogens. These compounds mimic the human body’s natural estrogen hormones. Some experts say that these health effects of soy are a good thing, helping women in perimenopause and menopause experience fewer hot flashes as they interact with estrogen receptors.

If you think of the way that soy can have an estrogen-like effect on women, the concern is that it could do the same thing to men or to children. While many studies show that soy is safe and only rarely leads to “feminizing” effects in humans, it is shown more widely to do so in animals. An article from German Medical Science in 2014 noted that animals who are fed soy can experience reduced fertility, stunted sexual development, and behavior changes.

Even if soy is largely safe in humans—and again, many of the studies done have been biased—the fact that the risk exists for testosterone imbalance, infertility, feminization, and sperm changes in men is concerning. Even though some research, as mentioned above, says it can help women with hormone changes, it can also potentially cause problems with ovarian function and even cancer.

Are these risks really worth small potential benefits, when there are so many other whole foods that can lower the risk of health problems?

My take: You don’t need soy to have a nutritious diet.

Soy isn’t great for humans and it’s not good for animals, either. The production of soy is harmful to the environment, too. Most soybeans today—at least 94 percent of them—are genetically modified (GMO) to be resistant to pesticides.

There is not much evidence on glyphosate (the pesticide applied in most conventional farming today) and how it affects human health. This is partly because a lot of money from agricultural food lobbies goes into preventing any type of restrictions on how glyphosate can or can’t be used. That being said, some scientists are concerned about it, although more evidence is needed to present a fully unbiased and evidence-based picture.

Even if you ignore potential specific concerns about glyphosate, the fact that soy products are heavily treated with pesticides is worrying enough for me. That alone means there are concerns for the gut health of both humans and feedlot animals who eat soy-based feed.

Soybean crops are also damaging to soil, as they strip it of nutrients. Foods obtain nutrients from nitrogen-rich soil. When the soil has already been depleted, crops that are grown—even organic ones—are going to be less nutritionally rich.

Should You Avoid Soy Products?

I’m not here to tell you what to do. Everyone needs to make the right decision for their health and their family, but I do not eat soy. I do not feed my children soy. We aren’t allergic, there just doesn’t seem to be any benefits for us. And there is definitely a risk.

If you are going to eat soy products because you’re not allergic or intolerant, or because you follow a vegan diet, make sure you’re only eating fermented soy. Traditionally fermented soy foods, like miso and tempeh, create fewer health challenges. The fermentation process helps to deactivate antinutrients that can cause gut problems—although it does not remove all of them. Soy products should still be eaten in moderation even if they’re organic and fermented.

Soy does not provide a complete form of protein either—containing all essential amino acids. If you are using it as a protein source, consider that you’ll also have to carefully pair it with other vegan sources to ensure you are not missing crucial amino acids.

Ultimately, soy products seem to offer more cause for concern than benefits.

What are your thoughts? Do you consume soy? Have you in the past? Tell me below!