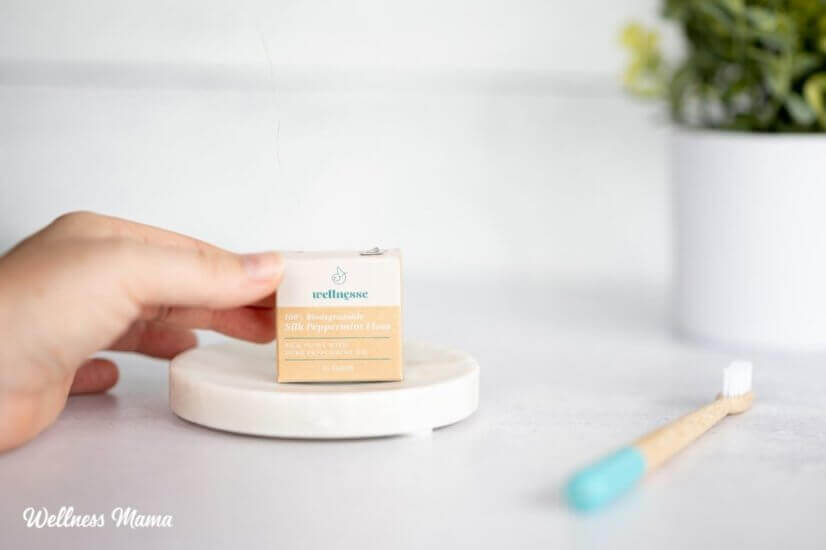 For most of us, our parents ingrained the importance of brushing our teeth and flossing from a young age. Many of us feel guilty as adults for failing to do both every single day.

Flossing is one of the most common and accepted general health recommendations. It’s right up there with the importance of eating vegetables, drinking water, and getting regular exercise.

Yet, how many of us have actually researched the benefits of daily flossing?

Adults told us to do it from such a young age that we assume it’s beneficial to do it daily. But is it important?

I was a daily flosser for years upon the recommendation of my dentist, but since converting to more natural oral health options, I’ve wondered how important it is.

Flossing for Health Is Under Investigation

The internet is still abuzz with debate on the importance of this recommended daily practice after the 2016 publication of an AP News article called “Medical Benefits of Floss Unproven.”

Did you miss that one? Are you surprised?

After all, TV and the internet are still full of ads and articles promoting flossing for good oral health. You’ll still likely get a free sample of it the next time you go to a dentist.

Dental recommendations haven’t changed since this article came out.

Despite the sensationalist headline, that article didn’t conclude that flossing is necessarily bad, just that there may not be any scientifically-proven reason to do it.

Let’s look at the logic of this practice and then the actual research to see what science says about it.

The Logic of Flossing

At first glance, it seems to make perfect sense. Food gets stuck between teeth. Floss removes this food. Thus, this is a good daily habit.

While that may technically be true, taking care of your oral health isn’t quite so simple. After all, there’s also the issue of bacteria in the mouth, between the teeth, and in the gums.

Now, not all bacteria are bad. Some of it is actually protective—just like in your gut. But certain bacteria (referred to as pathogenic bacteria) contribute to cavities and gum disease. It is well documented that Streptococcus mutans is the main cause of dental decay. Various lactobacilli are associated with the progression of the lesion.

In other words, the Streptococcus mutans species of bacteria is associated with dental decay. Certain lactobacilli species contribute to making the cavity worse. Bad breath can be an indicator that your oral bacteria are out of balance.

Dentists explain that cavities and gum disease occur in this way:

Does It Help Reduce Bacteria in the Mouth?

This is an important question when it comes to flossing. If the acid > sugar > bacteria equation is the reason for cavities and gum disease, stopping these bacteria is very important for avoiding problems in the mouth.

But does it actually help?

According to dentist Reid Winick, DDS, it isn’t effective at removing this bacteria, and doing it daily may actually make things worse! He explains that it doesn’t affect these pathogenic bacteria in the mouth and that when they multiply, they can affect the body in many ways:

“If these pathogenic bacteria grow out of control and enter our bloodstream, they can be transported through the body and cause inflammation. Chronic inflammation of any source leads to chronic disease. Failing to take care of your teeth may set you up for a range of serious medical issues such as heart disease, diabetes, preterm birth delivery, Alzheimer’s, and even inflammatory cancers like breast and pancreatic cancer.”

But flossing won’t fix the problem. In fact, he argues that the idea is laughable:

“Don’t be fooled, flossing is not the answer! To me, it’s common sense. How can you kill an infection with a piece of string, especially if it can’t reach the bottom of the pocket where the infection lives?”

All joking aside, when you start looking at the research, the “well-documented” benefits don’t stand up to scrutiny. This doesn’t necessarily mean that it’s bad or not helpful, just that it deserves a closer look.

The recent article that examines the evidence for flossing does so because the two most recent versions of Dietary Guidelines for Americans (2015-2020 and 2020-2025) make no mention of it. In the past, flossing has been part of their recommendations but was noticeably missing in the most recent updates.

The law requires experts to base these guidelines on well-documented scientific evidence. A few years ago, the Associated Press requested documentation from the Department of Health and Human Services and the Department of Agriculture about the benefits of flossing.

Instead of responding, the experts simply removed the recommendation from the guidelines for 2015-2020 and left it out again in the most recent one put out in 2020.

In other words, the government’s official health and nutrition publication, Dietary Guidelines for Americans, no longer recommends flossing.

The Associated Press examined the actual research. They looked at 25 studies that compared brushing alone or brushing and flossing and found that there was very little evidence for doing both—with a large potential for bias.

“The majority of available studies fail to demonstrate that flossing is generally effective in plaque removal,” said one review conducted last year. Another 2015 review cites “inconsistent/weak evidence” for flossing and a “lack of efficacy.”

So, it doesn’t even necessarily remove plaque.

In fact, in recent years, several reviews have looked at the available research about flossing and attempted to determine if there was a benefit or not.

So, what can we do to avoid these problems if flossing isn’t all that beneficial for reducing bacteria, cavities, or gum disease?

Other Ways to Reduce Bacteria

Thankfully, while flossing may not be as helpful as we once thought, it’s still useful in food removal. If you’re environmentally conscious, opt for the original natural silk version rather than the modern nylon version.

Beyond brushing and flossing, there are other ways to keep the mouth healthy. Aside from brushing with a good natural toothpaste and flossing with silk, you can try these alternatives:

This is one method I’ve been personally doing for years. Since adopting this practice, I have seen a definite reduction in plaque and tooth/gum sensitivity.

The name is a bit misleading, but it is essentially the process of using oil as a mouthwash. This post explains how to do oil pulling, but it involves swishing an oil such as sesame or coconut oil in the mouth for up to 20 minutes (sometimes with added essential oils).

This is beneficial because it reaches between teeth. The oil may help penetrate and break down the plaque. Additionally, oils like coconut oil can kill the S. mutans bacteria that lead to tooth decay. This makes oil pulling a great addition to your oral care routine.

I’ve seen several dentists write articles suggesting mouthwash as an alternative since the AP article. They point out that mouthwash (like oil in oil pulling) can reach between teeth and the edges of the gums.

For this reason, mouthwash can reach bacteria that floss can’t. Companies design it to kill bacteria in the mouth. (Here’s my own herbal mouthwash recipe if you’re interested in making it yourself to maintain some of your mouth’s biome.)

To be clear, most dentists still recommend flossing but suggest adding mouthwash or another method, like interdental cleaners, to the mix as well.

Oral Irrigation is another method that can help address bacteria in the gums and between teeth. My own dentists recommended it when I was younger and I used a Water Pik for years.

Like mouthwash, the idea is that the water can reach between teeth and into gums to address bacteria in the mouth.

While it may not be quite as important as we once thought, it’s still beneficial for food stuck between teeth. In light of the recent research, we can probably stop feeling guilty if we don’t floss every single day. Still, it’s a good idea to avoid food particle buildup leading to the growth of pathogenic (“bad”) bacteria and infections.

In that case, it’s good to be aware of proper techniques. If you’re not quite sure how to do it, here’s what the American Dental Association (ADA) recommends (it requires just a bit of dexterity):

It may also be a great idea to add oil pulling or mouthwash to address specifically pathogenic bacteria like S. mutans in the mouth.

How to Get The Right Type of Floss

The type you use matters. You don’t want to be putting petrochemicals and other toxins like Teflon, common in larger, well-known brands, into your delicate gum tissue. Remember, what goes on your skin and the inside of your mouth gets into your bloodstream.

For that reason, you’re not going to want to pick up regular floss from your local grocery store or drugstore. It’s important to know the ingredients that make up your dental products. After all, you’re putting them in your mouth!

If you’d like to add a completely natural, biodegradable dental floss to your daily oral hygiene routine, we’ve got you covered. Wellnesse now carries a silk floss that’s coated with natural candelilla wax (derived from a plant) and flavored with real antibacterial peppermint oil.

Share with us! Are you a daily flosser? What do you think of this new information on dental health?