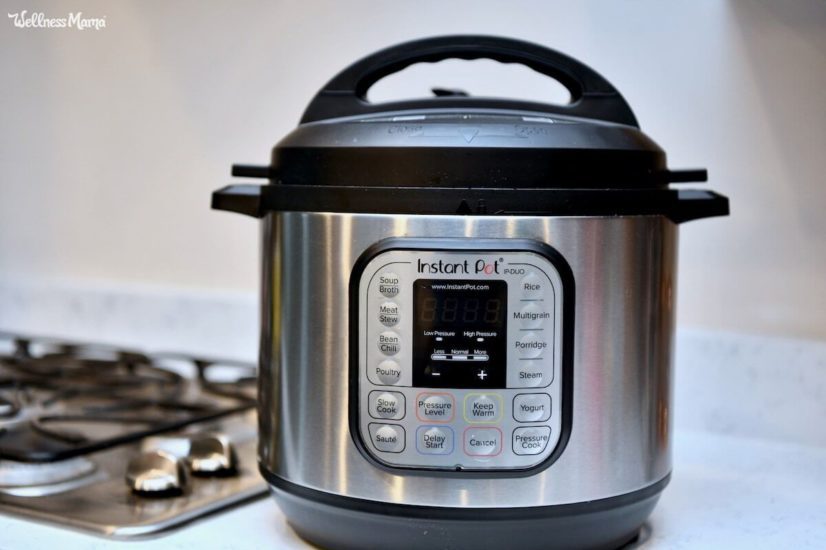 Over the last few years, I’ve been simplifying and reducing the tools and appliances in our kitchen and only keeping the ones we use often. In fact, our kitchen now has a simple assortment of unusual appliances and tools that we use every day. One appliance that has definitely earned its place on the list is the Instant Pot.

While it may feel like everyone in the world owns an Instant Pot now based on Instagram or social media, according to the most recent stats I could find (2018), only about 12% of households own one.

So, this review is for all of those “holdouts” because I promise you… it will change your life!

What Is an Instant Pot?

In short, it is an electric, programmable pressure cooker with a lot of extra functionality. It definitely isn’t our grandparent’s stove-top pressure cooker!

Although I’ve had one for a while, I haven’t even tried all of the uses for it yet. Our family uses it mostly as a basic pressure cooker and I now make many of my slow-cooker recipes in the Instant Pot instead (…a fast cooker?).

Instant Pot advertises that it is a single kitchen appliance that does the work of seven kitchen gadgets, including a rice-cooker, yogurt-maker, steamer and pressure cooker.

In essence, it is a fancy electric pressure cooker but it does this job exceptionally well.

Pros and Cons of Instant Pot

In my quest to simplify life, I decided to only keep kitchen appliances that serve more than one purpose. The Instant Pot met my criteria of being multiple-use so I decided to give it a try. It has quickly become one of my favorite kitchen tools and now I use it often.

All Stainless Interior: Unlike most electric pressure cookers, the Instant Pot has a fully stainless-steel interior so this is the only part that touches the food. While parts of the exterior are plastic or other materials, these do not come in contact with the food and there is no Teflon or non-stick surface.

Multi-Use: As a multi-use gadget it could conceivably replace a slow-cooker, rice-cooker, sauté-pan, and steamer. I’ve even had friends tell me that they now use the Instant Pot so often that they rarely use their stove and oven. I certainly can’t see the Instant Pot replacing my oven and stove, but it definitely could if I ever needed it to if one of those appliances broke.

Replace the Slow Cooker: The Instant Pot has largely replaced our slow-cooker and I’m considering even getting rid of the Crock-Pot completely since the Instant Pot works more quickly and often provides better results. I could see an electric pressure cooker like this one being especially helpful for anyone with a small kitchen as it could replace several other kitchen appliances.

Time Saving: This is perhaps the biggest benefit I noticed right away with the Instant Pot. It can cook a slow-cooker recipe that takes 6-8 hours in just an hour and I can even prepare a roast for dinner in about 40 minutes. This is tremendously helpful on days that we aren’t home during the day and I need to prepare a meal quickly at night (or days that I forget to defrost food until the afternoon or to put food in the slow-cooker in the morning).

Good Price Point: While the Instant Pot does cost more than most single-use kitchen appliances like slow-cookers and rice-cookers, it is cost-effective if you use it to replace one or more of these other gadgets. I found mine 50% off on sale here, and it has definitely already paid for itself in space and time savings.

Programmable: This is one advantage of the Instant Pot over regular pressure cookers and most slow-cookers. Since it cooks so quickly, I sometimes don’t need to start cooking a recipe as soon as I put it in the Instant Pot but I want to have it ready to go. The Instant Pot lets you program up to 24-hours in advance and has quite a few options pre-programmed for easy use.

Energy Efficient: Like a slow-cooker the heat source is electric and built in so it doesn’t require a separate gas or electric stove and is more energy efficient. Since it is self-regulated, it is also safer and easier to use (in my opinion).

Easy to Clean: Since the cooking bowl is all stainless steel it is easy to clean by hand and can even be placed in the dishwasher.

The Price (Up-front): Like I said, I found the price reasonable considering the other kitchen appliances that it replaced, but it does retail for up to $150 if you buy one with all the bells and whistles (though I found mine for under $100 here). If I’d known about this when we got married and registered for this instead of various other appliances, it definitely would’ve been a cost savings, but if, like me, you already have these other appliances, the cost can seem like a lot up front. Also, as I said, I don’t use many of the extra settings, so if you buy a basic model you might never miss the extra features.

Learning Curve: I’ve always been a little terrified of pressure cookers since a relative once severely burned her face in a pressure-cooker accident, and while the Instant Pot seems easier to use than many pressure-cookers, it is a new style of cooking with a little bit of a learning curve. It only took me a couple of uses to get comfortable using it, but I’d recommend reading the (short) instruction manual first before using the first time. It definitely didn’t feel intuitive the first couple of times I used the Instant Pot, but it was easy to learn.

Misleading Prep Times: When I first starting using the Instant Pot, dinner was late more than a few times because the recipes I was following said things like “cook on manual for 7 minutes.” I didn’t realize at first that the IP takes time to come to pressure and then release pressure, so a 7 minute cook time might actually mean 20-30 minutes. This still isn’t long to wait (especially when you’re talking about a tender roast ready in under 30 minutes!), but now I know to leave extra time when planning.

Lower PSI: Stovetop pressure cookers typically operate at around 15 PSI, while electric ones, like the Instant Pot range from 10-12 PSI. This can be both an advantage and disadvantage as electric cookers have built-in feedback that makes them more efficient but they do cook *slightly* slower than stovetop pressure cookers. I personally prefer the electric pressure cooker because it is easier to use and doesn’t require constant monitoring, but if speed is your main concern, the Instant Pot is slightly (5-10 minutes) slower on some recipes.

Safety: The Instant Pot is much safer than most other types of pressure cookers but it is still a pressure cooker and can release steam and cause severe burns if misused. I’ve never had trouble with ours and wasn’t able to find any cases of someone being harmed while using it correctly, but I am still very careful using it around my kids. I make sure it is in a sturdy place in the corner/back of the counter and that there are no chairs or stools that would let kids get to it or tamper with the lid. While I am a fan of kids in the kitchen, this is one device I don’t let them use.

Some of my favorite Instant Pot recipes are:

You can even make apple cider or applesauce in the Instant Pot!

I wouldn’t go as far as saying that I have a minimalist kitchen (or that I’d even try to when cooking for 7 people three times a day) but I would say that I have finally created a simplified kitchen and it works really well for our needs. In hindsight, I wish I’d known what I know now when selecting items for our wedding registry, since we’ve gotten rid of many of the items we thought we “had to have” when registering.

In the past few years, we’ve:

Most of the kitchen appliances we got as wedding gifts have broken or been donated and the ones that remain get used daily:

I bought this version of the Instant Pot (the 6-in-1) and I really like it. As I said, I got it on sale and it has more than paid for itself in time savings in the past few months. There is also a 7-in-1 version that also makes yogurt but since we make yogurt in the oven, I didn’t think this extra functionality was needed.

There is also a much-fancier Bluetooth enabled version that I wouldn’t personally recommend, since we are trying to reduce our exposure to Bluetooth/Wi-Fi but also because it doesn’t offer much extra functionality (besides being able to program from a smartphone) for the price (almost double).

I was skeptical about the Instant Pot so I put off trying it for a long time. I was surprised how much I really like it (and over 5,000 Amazon reviewers seem to agree!). In hindsight, I wish I’d tried it much earlier and can see this being my go-to wedding gift for friends in the future.

Unlike very basic kitchen tools like knives and quality pans, the Instant Pot is definitely not an absolute kitchen necessity but I would definitely recommend it to friends and family and it is becoming one of my most used kitchen tools. It is even great for camping!

Ever tried the Instant Pot? What did you think?