I’ve recently been experimenting with my new favorite kitchen appliance: the Instant Pot. What is it? An electric, programable, pressure-cooker. Think pressure cooker meets slow cooker.

I must confess, while I’ve known about the Instant Pot for a really long time and even had one for several months before trying it out. I put off using it because I had my tried-and-true cooking methods and pressure cookers seemed kind of old-fashioned.

Now that I’ve been using this thing often (aka: daily) for several weeks, I’m kicking myself for not trying it much sooner, as it drastically shortens the cooking time of almost any food and creates better (and faster) results than a slow cooker.

No worries… I didn’t for a long time and this recipe can work perfectly well without one (though check this link if you want to try one, because they are often on sale for up to 50% off!).

If you don’t have an Instant Pot, you can adapt this pot roast recipe by following the instructions for a beef roast on your regular pressure cooker or cook in a slow-cooker on low for 6-8 hours.

One of my favorite go-to recipes for the Instant Pot is this garlic herb pot roast. It is a variation of the basic slow-cooker pot roast recipe I’ve made for years, but in a pressure cooker/Instant Pot it cooks in about 45 minutes instead of 8 hours. I’ve found that the flavors also intensify in a pressure cooker and the meat gets more tender, so less seasoning is needed. 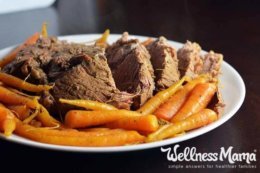 Do you use a pressure cooker or Instant Pot? What is your favorite pot roast recipe to make in it?

15 Humic Acid Uses & Benefits
Next Post: How to Reduce Plastic Use in the Home