I don’t like using the term superfood, though it could certainly be applied to Spirulina (and is sometimes used for coconut oil). Surprisingly, you may know this amazing compound by its common name…

This nutrient rich substance is actually a cyanobacteria and it boasts its fair share of health promoting properties. It is rich in chlorophyll, and like plants, gets its energy from the sun. It does have many benefits, (though contrary to some health claims, I’ve seen no evidence that it cures cancer or HIV).

Spirulina is a natural “algae” (cyanbacteria) powder that is incredibly high in protein and a good source of antioxidants, B-vitamins and other nutrients. When harvested correctly from non-contaminated ponds and bodies of water, it is one of the most potent nutrient sources available.

It is largely made up of protein and essential amino acids, and is typically recommended to vegetarians due to its high natural iron content.

The high concentration of protein and iron also makes it ideal during pregnancy, after surgery, or anytime the immune system needs a boost.

Though it does taste like pond scum, Spirulina has some great health-boosting qualities:

1. Most Nutrient Dense Food On the Planet

The concentration of protein and vitamins in Spirulina has led many to classify it as the “most nutrient dense food on the planet.” Compared to other foods gram for gram, it lives up to this reputation and is a great source of:

It also contains (per Tablespoon): 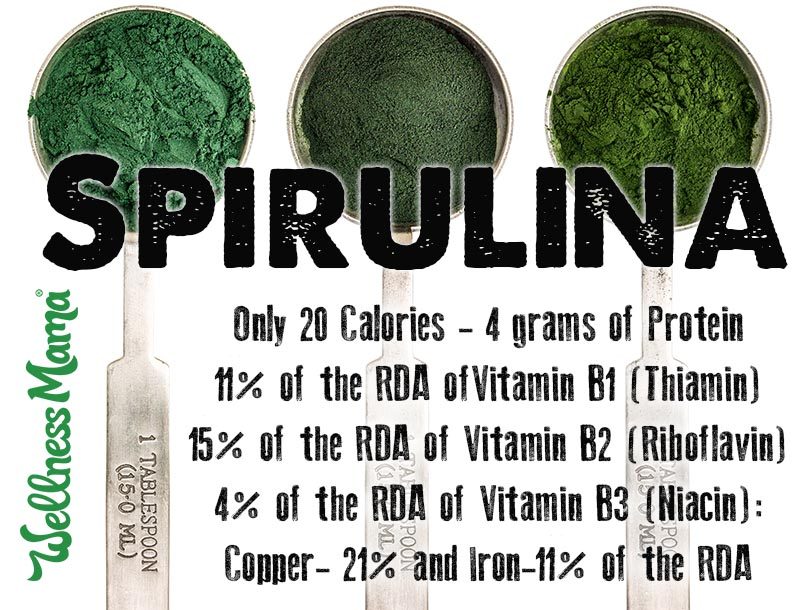 Spirulina is a great source of other nutrients including (according to Wikipedia): “It contains vitamins B-1(thiamine), B-2 (riboflavin), B-3(nicotinamide), B-6 (pyridoxine), B-9 (folic acid), vitamin C, vitamin D, vitamin A and vitamin E. It is also a source of potassium, calcium, chromium, copper, iron, magnesium,  manganese, phosphorus,  selenium, sodium and zinc. Spirulina contains many pigments which may be beneficial and bioavailable”.

Important Note: Contrary to many claims, Spirulina is not a good source of Vitamin B12 for humans. While it does contain a form of B12, it is pseudovitamin B12 which is not absorbable or effective in humans according to studies. 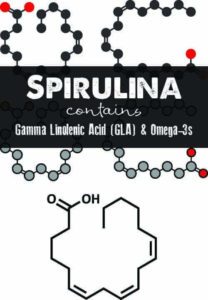 Spirulina is 65% protein and amino acids including the essential fatty acid gamma linolenic acid (GLA) which has gotten a lot of attention for its anti-inflammatory properties, especially when taken with other quality Omega-3 supplements.

GLA is difficult to find in a food source and normally has to be created by the body. Spirulina is one of the few foods with a natural GLA content.

I suspect that the benefits of GLA in Spirulina are even more than what the studies have found since these studies often use vegetable oils for their GLA source, and the other inflammatory compounds in vegetable oils can interfere with the anti-inflammatory ability.

Besides GLA, Spirulina also contains Omega 3-,6 and 9s and is especially high in Omega-3s.

Studies show that spirulina may be especially helpful in balancing blood sugar, and may even be as effective as diabetes medication in some instances. Other studies show that it not only lowers blood sugar but may also lower HbA1c, which is a long term marker of blood sugar levels.

Antioxidants are powerful substances that protect our cells from damage. Thanks to decades of research, many of us understand the importance of consuming enough antioxidants from natural sources, and spirulina is a great choice.

The antioxidant that makes spirulina unique is called phycocyanin, which is a potent anti-inflammatory.

This Spirulina was tested by an independent laboratory and found to have an ORAC (Oxygen Radical Absorbance Capacity) of over 24,000 which is 4x the ORAC score of blueberries. The ORAC score is generally used to measure antioxidant ability and concentration in different foods.

5. May Help Those with Allergies

Some research has suggested that Spirulina may be helpful for those with allergies and allergic reactions. (source)

This is likely because it reduces inflammation that leads to nasal congestion and other issues. In studies, those who took spirulina noticed a reduction in nasal congestion, itching, and sneezing.

Spirulina can bind with heavy metals in the body and help remove them.

It is also extremely high in Chlorophyll, which helps remove toxins from the blood and boost the immune system. In fact, one study found that 500 milligrams of spirulina daily combined with zinc supplementation was enough to reduce arsenic toxicity by almost half!

Emerging evidence also suggests that it binds with radioactive isotopes and may be useful for radioactivity exposure or radiation therapy.

Spirulina is known to increase fat burning during exercise. Its high antioxidant content makes it beneficial in reducing exercise induced oxidation which leads to muscle fatigue and inability to gain muscle.

In fact studies found that it: 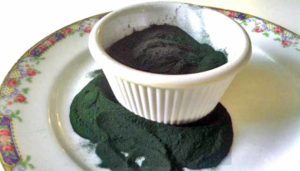 Those with phenylketonuria (PKU) should consult with a doctor before taking, as it does contain that amino acid. Those on any type of anti-coagulation medicine should consult with a doctor before beginning (or stopping) taking Spirulina. Some people with autoimmune disease do not do well with this supplement. If you are pregnant, nursing or have any medical condition, check with your doctor first as it is often not recommended for pregnant or nursing women.

As I mentioned above, this beneficial algae is gram for gram one of the most nutritious foods on the planet. It is also probably one of the most expensive when compared gram for gram. Many articles about its benefits focus show the nutrition data per ounce. The problem is that one ounce contains about 28 grams and is MUCH higher than normal (or safe) daily intake would be.

It costs up to 30x as much as dairy or meat protein per gram and is not a viable primary protein source for this reason.

Is Spirulina the Same as Chlorella?

Both are types of algae but there are some key differences:

How to Take Spirulina (& What I Use)

I use a couple of different sources of spirulina that all checked out when I did my research.

For more on why spirulina and chorella are so beneficial for health, check out this Wellness Mama podcast interview with EnergyBits creator Catharine Arnston.

Ever tried spirulina? What did you think of the taste? Will you try it now? Share below! 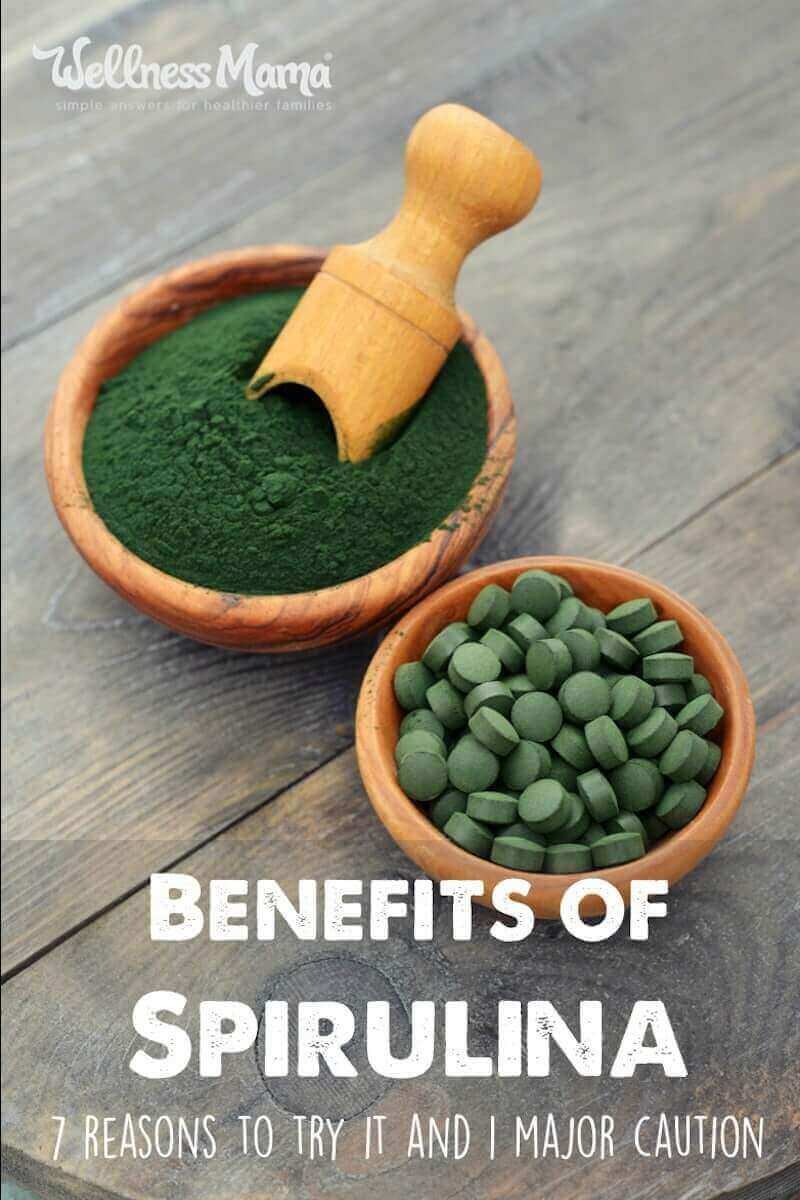 9 Effective Remedies for Chigger Bites (You Have at Home)
Next Post: Simple Pickled Red Onions Recipe (In Less Than 5 Minutes)