I’ve been on an Italian chicken variation kick lately. I absolutely love chicken piccata and finally figured out a great recipe for it which inspired a lot of chicken cooking around here lately. I’ve made healthy variations of chicken cacciatore, chicken Florentine, chicken Marsala, and chicken carbonara.

In restaurants, this is often made with an extremely thick cream sauce and served over pasta. I substituted spaghetti squash, made a healthier (and optional) sauce, and added some wilted spinach and asparagus for flavor and extra nutrition. My kids liked this one and my hubby (who despises the texture of wilted spinach) even ate it without complaint. 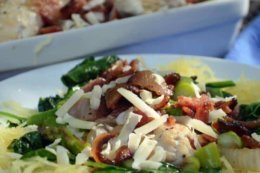 Would you try this version of chicken carbonara? What’s your favorite chicken dish? Share below!