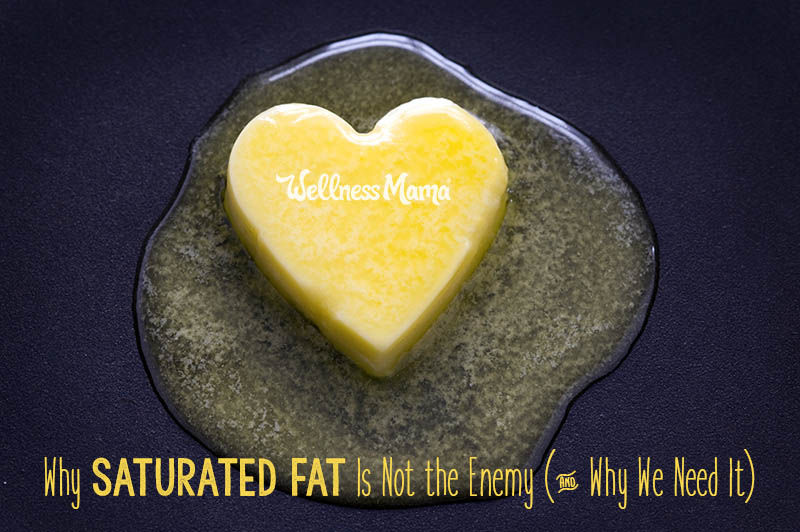 Conventional wisdom (at least for the last few decades) says that saturated fat and cholesterol are bad for you and contribute to heart disease…. but what does the evidence say?

The fear of saturated fat began in the 1950s when Ancel Keys published a paper supposedly linking saturated fat/cholesterol with rising rates of heart disease. The problem, as this article explains, was his cherry-picking of available data:

“Keys based his theory on a study of six countries, in which higher saturated fat intake equated to higher rates of heart disease. However, he conveniently ignored data from 16 other countries that did not fit his theory. Had he chosen a different set of countries, the data would have shown that increasing the percent of calories from fat reduces the number of deaths from coronary heart disease.

And, as illustrated in the featured article, when you include all 22 countries for which data was available at the time of his study, you find that those who consume the highest percentage of saturated fat have the lowest risk of heart disease.

Furthermore, many have now realized that it’s the trans fat found in margarine, vegetable shortening, and partially hydrogenated vegetable oils that is the true villain, causing far more significant health problems than saturated fat ever could!”

Here is a short video that sums it up in two minutes:

Despite evidence to the contrary, the saturated fat/heart disease theory was largely accepted and promoted in the medical and nutritional communities and is widely accepted today.

What if Saturated Fat is Healthy?

Cultures Around the World That Eat Fat

There is also current data from populations in several areas around the world that confirms this point:

Lest anyone think that these tribes are simple pre-disposed to heart health, studies show that when people from these tribes move to other countries and consume a westernized diet, they get heart disease in the same rates as people in these countries.

As this article points out:

Chris Kresser sums it up well…

There. That’s it. That’s really all you need to know. But if you’d like to read more about it, John Briffa wrote a great article about it that can be found here.

Agree that fat isn’t the problem but think that cholesterol could be the culprit instead? Check out this article.

There are many convincing reasons to consume for saturated fat, such as…

Turns out that eating saturated fat may actually be important for preventing heart disease… As Drs. Michael and Mary Dan Eades, MD explain:

“Though you may not have heard of it on the front pages of your local newspaper, online news source, or local television or radio news program, saturated fat plays a couple of key roles in cardiovascular health. The addition of saturated fat to the diet reduces the levels of a substance called lipoprotein (a)—pronounced “lipoprotein little a” and abbreviated Lp(a)—that correlates strongly with risk for heart disease. Currently there are no medications to lower this substance and the only dietary means of lowering Lp(a) is eating saturated fat. Bet you didn’t hear that on the nightly news. Moreover, eating saturated (and other) fats also raises the level of HDL, the so-called good cholesterol. Lastly, research has shown that when women diet, those eating the greatest percentage of the total fat in their diets as saturated fat lose the most weight.”

Eating fat makes you fat? Not so much..

There are whole books dedicated to the subject (affiliate) but in short (from Mark Sisson):

“Fat doesn’t make you fat. While you can technically overeat enough fat calories to accumulate adipose tissue, thus getting fat, this is a difficult feat, for two primary reasons:

Fat is very satiating, especially when paired with low-carb eating. Grass-fed pot roast, ribbed with yellow fat, connective tissue, and ample protein is far more filling than some crusty bread spread with butter. You’ll eat a decent slice of the former and be done, but you could easily polish off half a loaf of the latter with half a stick of butter and still be hungry. It’s difficult to overeat on a high-fat, low-carb diet.

Dietary fat in the presence of large amounts of dietary carbohydrates can make it difficult to access fat for energy, while dietary fat in the presence of low levels of dietary carbohydrates makes it easier to access fat for energy. Couple that with the fact that fat and carbs are easier to overeat together, and you have your explanation. In fact, studies have shown that low-carb, high-fat diets not only reduce weight, they also retain or even increase lean mass. That means it’s fat that’s being lost (rather than the nebulous “weight”), which is what we’re ultimately after.”

According to the Drs. Eades:

“Adding saturated fat to the diet has been shown in medical research to encourage the liver cells to dump their fat content. Clearing fat from the liver is the critical first step to calling a halt to middle-body fat storage. Additionally, saturated fat has been shown to protect the liver from the toxic insults of alcohol and medications, including acetaminophen and other drugs commonly used for pain and arthritis, such as nonsteroidal anti-inflammatory drugs or NSAIDs, and even to reverse the damage once it has occurred. Since the liver is the lynchpin of a healthy metabolism, anything that is good for the liver is good for getting rid of fat in the middle. Polyunsaturated vegetable fats do not offer this protection.”

The brain is made largely of fat and the majority of the fat in the brain is saturated. The Myelin Sheath that surrounds the nerves in the brain and ensures their proper function is also largely made of saturated fat and cholesterol. As such, consuming saturated fats is extremely important, especially during pregnancy and nursing as these are times of rapid brain development for babies.

From a previous article:

“At the same time that Omega-6 oil consumption has risen, consumption of saturated fats and Omega-3 fats has declined. We’ve seen how well that’s worked out for us, but it turns out that it could have a pretty big impact on skin health too.

The body needs healthy fats, including saturated fats, monounsaturated fats,  and Omega-3 fats, to regenerate skin tissue, and these fats are the preferred building blocks in the body. If the body doesn’t get these fats (and many people don’t these days), it will use whatever it has available, including Omega-6 fats, which are not the preferred fat for building skin and collagen and can cause mutation (cancer).”

Saturated fats are also important for keeping the immune system functioning properly. From this post:

“Saturated fats found in butter and coconut oil (myristic acid and lauric acid) play key roles in immune health. Loss of sufficient saturated fatty acids in the white blood cells hampers their ability to recognize and destroy foreign invaders, such as viruses, bacteria, and fungi. Human breast milk is quite rich in myristic and lauric acid, which have potent germ-killing ability. But the importance of the fats lives on beyond infancy; we need dietary replenishment of them throughout adulthood, middle age, and into seniority to keep the immune system vigilant against the development of cancerous cells as well as infectious invaders.”

What if Bad Fat is Actually Good For You? – at Men’s Health

Saturated Fat- Will I Get Fat and Die?

The Seven Most Common Reactions to Your High Fat Diet

Is Saturated Fat Healthy? at MarksDailyApple.com

What if It’s All Been A Big Fat Lie? (Gary Taubes interview by Dr. Mercola):

Saturated fat and cardiovascular disease: the discrepancy between the scientific literature and dietary advice.

Where do you fall on the Saturated Fat debate? Share below!

7 Simple Natural Remedies
Next Post: Are Milk and Dairy Healthy?