One of our holiday traditions is to cook a prime rib (from a healthy source). At first I was a little nervous about cooking such a fancy cut of beef, but I figured I’d give it a shot.

I did a little research and found a simple, hands-off cooking method that sounded perfect. And it was! It was perfect, and juicy, and delicious.

Read on to find out how I did it.

My first step was to figure out the lingo. I learned that prime rib is also called a rib roast and can have bones or be boneless. If it has bones, it’s also called a standing rib roast. You can buy a whole prime rib, which contains seven rib bones and weighs about 13 pounds, or ask for a smaller portion.

Both boneless and standing rib roast are flavorful, tender, and delicious, but I decided to go with the roast with bones. I liked the fanciness of the look, the easier cooking method, and the idea of using the bones to make bone broth later.

Finally, I needed to figure out how much meat I would need. Fortunately, there’s a pretty universal formula for determining that. The general consensus when buying a bone-in roast  is to buy one pound of meat per adult. Usually, there’s around two pounds of meat per bone in a rib roast. So a three rib roast will weigh five to six pounds.

You’ll probably have some extra, especially if you’re serving tasty sides as well, but who doesn’t like leftovers?

After I figured out what kind of roast to buy and how much of it, I needed to decide on my cooking method. After extensive research, I decided that I would try this simple hands-off method.

First, I let the roast rest at room temperature for an hour or so. Then, I rubbed my roast all over with olive oil, and seasoned it liberally with salt, pepper, and herbes de Provence. Then I placed it rib side down in my largest cast iron skillet. Because I was using a roast with ribs, the ribs acted as their own cooking rack! If you choose a boneless roast, you’ll need to place it on a rack.

Then, I put the roast in my 475°F oven for 30 minutes then turned the oven off and left the roast in there for another two hours and ten minutes. And that’s it!

When the time was up my roast was beautifully browned and caramelized on the outside from the original high temperature, cooked to a perfect medium-rare on the inside, and didn’t need a long additional resting time because it had already done that as the oven cooled.

Pro tip: The secret roasting formula is to roast the meat for five minutes per pound with the oven on, then turn it off and leave it in there for another two hours. 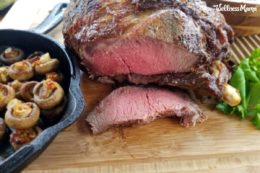 Make a simple au jus by whisking together the juice and drippings left in the pan with 2 cups of water, and heating on the stove. Taste, and if it’s still too concentrated, add more water.

Sides to Serve With Prime Rib

The only tricky part of making a rib roast with this method is that it ties up your oven for the two hours prior to dinner time. That can make preparing the side dishes a little tricky. Here are some oven-less side suggestions:

Have you ever made a prime rib? What’s your tried-and-true method?

Creative Ways to Be Generous This Year
Next Post: Can Intermittent Fasting (Skipping Meals) Make You Healthier?