I mentioned the Vinegar of the Four Thieves when talking about natural bug spray alternatives, but this health tonic is so much more! This herbal tincture is easy to make and works for so many purposes (more on that below). We use it both internally for illness and externally for a natural insect repellant.

The Legend of the Four Thieves

And if you’re wondering about the name…

According to legend, the Vinegar of Four Thieves came from a specific combination of herbs used by four thieves during the Bubonic Plague.

The story goes that four thieves, one of whom was an herbalist, robbed the homes of many who had died of the plague. Eventually caught and brought to trial, the thieves were released in return for the recipe for the tonic that they credited with protecting them from the plague.

The thieves survived, as did the legend and the recipe for their herbal vinegar.

Though we hopefully won’t ever need this remedy for anything as serious as the plague, it still serves as a valuable remedy against many illnesses and is a powerful disinfectant and bug spray.

This recipe centers around herbs that have been known for their antibacterial, antiviral, antiseptic, and antifungal properties for centuries (and science backs it up). Just combine with apple cider vinegar and let sit until it reaches potency.

Here are a few of the ways I use it:

Don’t say I didn’t warn you: the Vinegar of the Four Thieves smells awful and tastes almost as bad, but it is very effective against a variety of ailments. My kids complain (a little), but they know it will help get them feeling better fast! 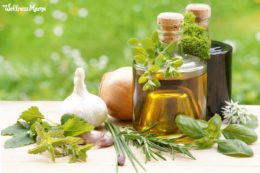 Most herbs can be found locally, but are also available online.

Here is my list of favorites I do make myself and always keep on hand:

Add this strangely named vinegar remedy to your list and enjoy its potent benefits!

What is your best natural health remedy? Will you try this herbal vinegar? Share below!