It seems to be a common theme in history that the things that lead to great progress and convenience also come with a big price. This seems to be very much true with plastic products and packaging.

There is no denying that inexpensive plastics have made many aspects of food and water distribution much easier (though I would argue that this is problematic as well), but emerging research and data from decades of increasing use of plastics suggest that we need to seriously reevaluate our plastic usage.

Personally, I’m convinced that our health and the health of our planet would be much better off if we drastically reduced our use of plastic. Here’s why:

Certain chemicals in plastics, like Bisphenol-A (BPA), have gotten media exposure for their potential health problems but there’s much more to the problem that a few isolated chemicals.

BPA is often added to plastics to make them more durable, but it was once given to animals like cows and chickens to cause them to gain weight before slaughter. BPA is known to disrupt hormones and can mimic the effect of estrogen in the body, leading to weight gain and hormone imbalance.

From The Journal of the Yale School of Environmental Studies:

There is also now abundant research that links BPA and phthalate exposure to such human health concerns as deformities of the male and female genitals; premature puberty in females; decreased sperm quality; and increases in breast and prostate cancers, infertility, miscarriages, obesity, type 2 diabetes, allergies and neurological problems, like attention deficit hyperactivity disorder.

It is widely known that plastics from food packaging can leach into food and enter the body. The CDC reports that over 92% of people who were tested had detectable levels of BPA and other plastic chemicals in their bodies (including newborn babies).

“Estrogenic chemicals found in many common products have been linked to a litany of problems in humans and animals. According to one study, the pesticide atrazine can turn male frogs female. DES, which was once prescribed to prevent miscarriages, caused obesity, rare vaginal tumors, infertility, and testicular growths among those exposed in utero. Scientists have tied BPA to ailments including asthma, cancer, infertility, low sperm count, genital deformity, heart disease, liver problems, and ADHD. “Pick a disease, literally pick a disease,” says Frederick vom Saal, a biology professor at the University of Missouri-Columbia who studies BPA.”

Phthalates are also found in many plastics and in high levels in indoor air. The European Union banned them in 2005 and many other countries have banned them as well.

Phthalates are considered to be especially harmful to men and boys, especially those exposed in utero. They are linked to immune system impairment, reduced testosterone, infertility in men and many other problems.

Plastics and the Planet

To go all Captain Planet for a minute, plastics are literally taking over the earth at a terrifying rate.

Dr. Alan Christianson, an expert in endocrine health, speaks the drastically rising rates of obesity in humans and in many other animal species (including wild animals whose diets have not changed). In his upcoming Adrenal Reset Diet book (I highly recommend it), he explains how many factors can contribute to these problems, but that they all share the trait of negatively affecting the endocrine system, especially the adrenals.

The chemicals in plastics are known endocrine disruptors, and this common thread may explain why we are seeing these problems in many species of animals around the world.

When we consider how long it takes for plastic to break down, and the high levels of plastic pollution found even in areas not inhabited by humans (like the ice and water of the Antarctic), we can start to understand how big of a problem plastic pollution can be.

UV light and the salt in seawater cause microscopic particles of plastic to emit toxic chemicals such as PCBs and DDT. When ingested by many types of marine species, these can be mistaken for estradiol, a sex hormone, causing a variety of symptoms related to endocrine disruption. Additionally, the chemicals tend to bioaccumulate in organisms as they move up the food chain, and can eventually lead to tainted populations of fish that humans regularly consume.

These sorts of problems have led Charles Moore, an oceanographer and racing boat captain who played a significant role in discovering and publicizing the great Pacific Garbage Patch, to argue that plastic pollution has become a more urgent problem for ocean life than climate change. “The sad thing is we thought Antarctic waters were clean,” he told the Australian Associated Press after the Tara‘s findings were announced. ”We no longer have an ocean anywhere that is free of pollution.”

With widespread plastic usage, it is likely that these problems will only get worse. Reuseit.com reports that:

Plastics are widely considered safe by regulatory agencies, but not because they have been tested and proven to be safe. In most cases, this just means they have not been tested at all or that industry sponsored tests have shown them to be safe in small levels.

Where are These Most Commonly Found? 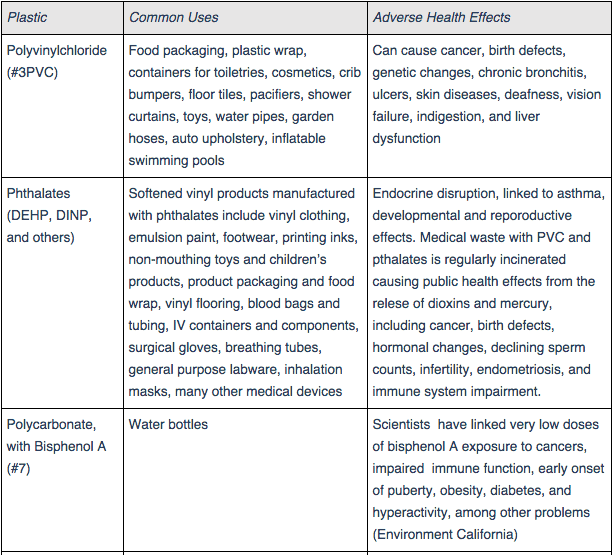 The documentary Unacceptable Levels points out many of the most prominent sources of plastic pollution in our homes.

I know some people reading this are defaulting to the “oh please, everything is going to kill us anymore, this is just alarmist and fear inducing,” mindset, and I don’t blame them. It is hard not to feel like everything is out to get us sometimes, but I truly believe that plastic exposure might be the “cigarettes” of our generation.

It was once considered absurd that smoking could be unhealthy, and there were even campaigns claiming that more doctors preferred one brand of cigarettes to another. Soda was once marketed as a healthy drink for small babies. Regulatory agencies once considered now-banned chemicals like DDT safe for use and there were even ad campaigns promoting their usage around children.

We now look back and laugh at the idea that smoking is completely safe and laugh… perhaps that is how we will think of plastic in just a couple of decades. (Update: A reader brought to my attention that the soda ad was actually a hoax designed to make fun of other poor advertising from that time- though I found it used as an example of vintage advertising on several reputable sites. I have verified the authenticity of the other two ads and decided to leave the soda ad but disclose this information)

What Can We Do?

Unfortunately, plastics take a really long time to break down and the high levels of plastics in landfills, oceans and even remote areas of the planet paint a rather bleak picture of the future for plastic pollution.

One big thing we can all do is to reduce the amount of plastic products we are buying and using. This will reduce our own exposure to plastic pollution, our planet’s plastic load, and will often save money as well. Some great ways to reduce plastic exposure:

Have you ever thought about how much plastic is in use in your family’s daily life? What suggestions do you have to help reduce it? Share below!