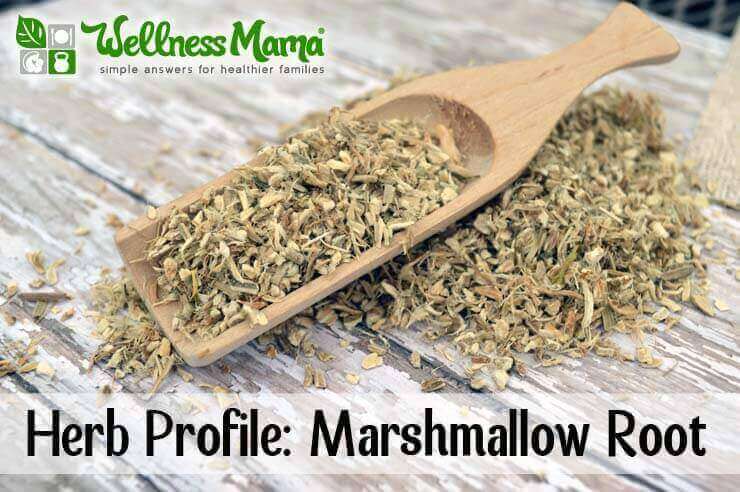 Marshmallow Root is an herb that has been around for centuries. In fact, it was mentioned in Homer’s Iliad (written 2800 years ago). It was used in ancient Greek and Indian cultures for its healing properties.

Mountain Rose Herbs details some of the many  uses:

Marshmallow root has long been used as a food, particularly during times of famine when it is more abundant than other vegetables. Medicinally, it has been approved by the German Commission E in supporting inflammation of the gastric mucosa, and for irritation of the oral and pharyngeal mucosa. When combined with other herbs, it is additionally used for mild respiratory symptoms, including cough. The root is traditionally used to support a healthy digestive system, but this application has not been clinically studied.

It is a demulcent herb, meaning that it is cooling, soothing and slippery. It is often used to sooth digestion, skin or hair. It is unique in that when making a tea with Marshmallow Root, you will want to brew it with cold water to preserve the mucilaginous properties. This explains:

Marshmallow works as a mucilage, producing a thick sticky substance that coats membranes. Marshmallow extract contains flavanoids, which contain anti-inflammatory properties. The flavanoids are able to reduce inflammation while the mucilage holds them in place and prevents further damage. The extracts also induce phagocytosis, which is the process in which certain cells engulf bacteria, dead cell tissues or other solid particles. This helps speed up the healing process. The mucilage remains unaltered until it reaches the colon, which is why marshmallow works well on most inflammatory digestive disorders.

Marshmallow root has not been specifically studies in pregnancy and nursing so consult a doctor or midwife before using this or any other product if you are pregnant, nursing or have a medical condition.

Some ways that we use it:

Where to Get Marshmallow Root

The easiest way to try Marshmallow root is in a cooling and soothing tea. This one is my favorite:

Tried this recipe?Let us know how it was!

Ever used marshmallow root? What did you use it for? Share below!