Technology has allowed us to go wireless and avoid the hassle of cables. We can now remotely turn the TVs on, start a coffee machine, and monitor babies using wireless technology. At the same time, we are exposed to unprecedented levels of electromagnetic radiation from wireless signals 24/7.

Have you wondered “Is WiFi Safe?” at these levels?

Hang on tight… this may get controversial. There seem to be two rather extreme opinions when it comes to WiFi. One side says that it is completely safe and likes the idea of “smart” houses with everything run off Wifi. The other side is ready to build a Faraday Cage around themselves at all time.

The truth is likely somewhere in the middle.

Understand the Effects of WiFi

WiFi does not immediately cause diagnosable illness. For this reason, many of us choose to ignore that it can have any affect at all. However, it can interfere with our bodily functions which may eventually progresses into diseases like cancer and neurodegenerative diseases after long term exposure.

Because these are complex diseases that develop over decades, it is difficult to conclusively show that the increase in wireless signal exposures directly cause the diseases. International Agency for Research on Cancer (IARC) considers wireless radiation as a class 2B possible carcinogen due to limited evidence. These small number of studies are leaning towards showing that electromagnetic radiations, including WiFi, are not safe.

In the Lancet article outlining their considerations, that IARC states that epidemiological studies that follow humans who use WiFi and cell phones for a few years are not conclusive. However, rodent studies that follow the animals throughout their lifetime find that wireless radiation does cause cancer or worsen cancer prognosis. The same animal studies also observed other changes in the brain and blood brain barrier in animals that are exposed to the radiation.

The limited evidences in humans may be why regulators are claiming that this type of radiation is safe. However, some anecdotal evidences, such as how Canadian families in Ontario are noticing headaches and brain fogs in their children, suggest that WiFi may not be healthy, so it is probably better to err on the side of caution.

It is even more important to protect children and developing fetuses from radiation as their small and growing bodies are more vulnerable to radiation than adults. Many products on the market aim to help protect babies in utero from WiFi radiation (like this belly armor blanket and even this belly-shielding band for pregnant moms).

How to Reduce WiFi Exposure 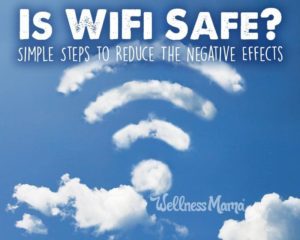 First, it is important to reduce use as much as possible, especially until we know more about the long-term effects of WiFi. The pro-WiFi crowd may scoff at the idea that anything could be potentially harmful about it, but we once thought smoking was perfectly fine too!

While it may not be possible to get the entire family on board, there are many options to reduce exposure while keeping everyone happy, including:

Turn off WiFi Before Going to Bed (Good)

Everyone should be sleeping at bed time, and WiFi signal may interferes with the brain during sleep, so it is a good idea to turn it off before going to bed. This allows the body to rest more deeply. By turning it off at night, you are effectively cutting down exposure by 33%. (Aside from the WiFi reduction, many security experts also recommend turning off your internet when not using it).

In addition, because many people browse the internet mindlessly at night, some may also find that having a WiFi curfew improves their marriage because they become more present with their spouse.

Many router models will have features that make it possible to automatically shut off WiFi connection and turn it back on at the same time every day, which will be useful for this purpose. You can also use an inexpensive timer to do this for you.

Turn On WiFi Router Only When in Use (Better)

If you and your family members are up for giving up WiFi for the most part, but still insist on connecting some devices from time to time, then having an option to switch on the router when in use is a better option as this reduces WiFi exposure only to a few hours a day.

Give Up Wireless and Hardwire All Your Connections (Best)

Giving up WiFi altogether is the healthiest option. It may sound daunting but it is possible and may mitigate several health issues down the line. In addition, you will enjoy more consistent and faster internet when directly hardwired in. It is certainly more work and not doable for everyone, but something we are (slowly) attempting.

You’ll need to pick up some affordable tools, including:

It is also a good idea to use wired peripherals like keyboards, mice, and headphones instead of wireless ones to reduce exposures to electromagnetic radiation.

If that all seems complicated to set up, I’d recommend asking someone to help. My tech-savvy brother was the lucky recipient of my questions.

Hold Up on Adding Gadgets or Upgrading to Smart Homes, Offices, and Cars

With new wireless technology, wireless-enabled devices with bells and whistles are on sale every single day. Smart home thermostats, bluetooth-controlled cookers, wireless baby monitoring system, and smart beds might make life easier, but they may not be as safe as we think.

Such technologies are still very new. These devices use many forms of wireless technologies, for which we don’t fully understand the long term health consequences. For these, less is more.

Cell phones and tablets emit electromagnetic frequency when the receivers are turned on. Because we typically use these devices very close to our bodies for extended periods of time, exposure levels can be very high. Therefore, important to keep them on airplane mode, especially when they are around children.

Remember to also teach children and caregivers to turn these devices on airplane mode to reduce WiFi and electromagnetic exposures.

How to Mitigate the Harmful Effects of WiFi Exposure

It may be difficult to completely eliminate exposure, especially if you live or work in an urban area. In addition to taking the steps above to reduce WiFi exposures, there are many ways to mitigate the harmful effects of WiFi signals, including:

Use a Dirty Electricity Filter to Reduce Electromagnetic Radiation

Dirty electricity occurs when electronic devices need to manipulate the electric currents into the format and voltage that the devices need. This can create electrical surges throughout the wiring system.

Electronic devices, including WiFi Routers, phone chargers, and computers all produce dirty electricity, which can be a significant source of harmful electromagnetic frequencies (EMF) in the building.

In order to mitigate this effect, consider installing dirty electricity filters on outlets throughout the home and work environment.

Wireless devices emit unhealthy positive ions and also interfere with the waves in our own bodies, such as our brain waves and the electrical system that runs our cells. By earthing, the positive ions in our bodies can be equalized with negative ions from earth, which can mitigate the harmful effects of EMFs.

In addition, earthing allows our bodies to synch with the Schumann resonance (7.83 Hz), which is earth’s own electromagnetic frequency that we are naturally built to be exposed to. A Japanese study in 2005 showed that the Schumann resonance can reduce blood pressure and produce some positive health outcomes. By synching with earth’s natural frequency, we reduce the risks of WiFi waves interfering with our bodily functions.

You can earth simply by standing barefoot on the ground for 20 minutes daily. Alternatively, you can also use a grounding shoes with an earthing metal piece, or bed sheets that connects to the grounding port of your home electrical outlets.

You can find naturally occurring negative ions near moving water, such as at the beach or moving streams of water.

In addition, you can use a Himalayan salt lamp or negative ion generator in your home to increase your exposure to healthful negative ions and mitigate the negative effects from WiFi exposure.

Are you concerned about WiFi exposure and new wireless technologies? Weigh below!

The GAPS Diet: Help for Food Allergies and Gut Issues?
Next Post: 9 Non-Toxic Ways to Get Rid of Bed Bugs (& Avoid Them)