Wellness Mama » Podcast » 11: How to Foster Success in Your Children

In this episode I talk to former professional football player and world renowned speaker, Bo Eason, on a very important topic.

This episode deviates from my usual themes of nutrition and health but addresses another important aspect of life. When I first heard that Bo would be speaking at an event I was attending, I wrote him off, figuring I would not learn much from an ex-football player.

I could not have been more wrong! He told a story that struck me to the core, and I realized that he and I had similar goals for our families.

He said that after he retired from playing football, he took his children to a birthday party in their city in California. He talked about how these lavish parties for five year olds always seemed to try and one-up each other and how uncomfortable he felt at them.

His son Axel, found a football in the bushes and Bo and Axel started tossing the ball back and forth. Bo noticed a group of the other dads watching him and whispering as they played.

At one point, Bo’s son dropped the ball, and he told him “Don’t let the ball touch the ground. Don’t drop the ball.”

He noticed more whispering from the other dads and eventually one of them walked over to him and said “Why did you say that to that boy?”

Bo responded, “Well, that boy is my son, and in our house, it is a rule that we don’t let the ball touch the ground.”

The conversation continued and the other dad asked Bo, “Why is this a rule in your house?” 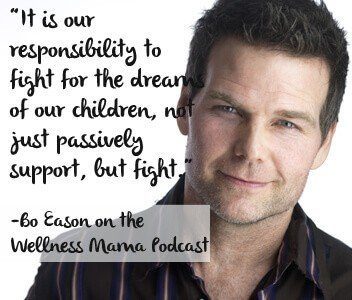 Bo told the other dad that growing up, he and his brother got a football for Christmas one year and would toss it to each other 1,000 times per day. They realized that it was a long time until next Christmas and that they had to make the football last, so they didn’t want it to touch the ground very often so it wouldn’t wear out too quickly, so that was their rule.

The other dad asked him “Well, how did that work out for you?”

Bo responded “Pretty well I guess since my brother and I both played in the NFL.” The other dad “humpfted” and walked away.

That moment was a pivotal one for Bo, and he decided that he would not put up with mediocrity or those types of influences for his children.

Bo’s message is about story telling and fostering success in his children (and in his own life). He set his goal to play in the NFL when he was 7 years old and he accomplished it. He is now a renowned speaker and teaches storytelling to others worldwide.

In this episode, Bo mentions these books

I was VERY inspired by him and I know you will be too…. Check it out! You can subscribe to the podcast via iTunes or Stitcher to get every episode downloaded automatically on your phone.

What are you doing to foster success in your own children? Did you find Bo as inspiring as I did? Share below!