Wellness Mama » Podcast » 15: Hormones & How to Have a Healthy Baby

Chris Kresser is a licensed acupuncturist and practitioner of integrative medicine. He researched to find his own health answers after conventional medicine wasn’t able to help his chronic disease and he now works to help others improve their health and their lives through better nutrition and lifestyle. 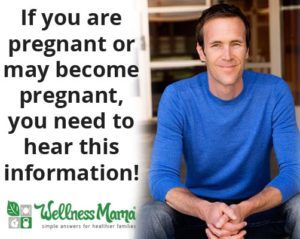 Chris became especially interested in fertility and hormone health when he and his wife had trouble conceiving and his research led him to unconventional answers about diet, lifestyle and stress. They went on to conceive and have a healthy (and beautiful) daughter and it is now a mission for him to help other couples do the same.

Chris created a whole course on this and I highly recommend it. You can find out more about it here.

Chris talks about the developmental origins hypothesis, or the idea that the diet of the mother (and father) before pregnancy and during pregnancy (for the mother) have an impact on the lifelong health of the child.

He talks about some amazing statistics on how birth weight and health at birth correlates to risk of heart attack and other problems. Babies with low birth weight were at increased risks for these problems, but babies born with a healthy weight and at full term had a lower risk.

We also delve in to a subject that I find fascinating: the link between the mother’s gut bacteria and the baby’s lifelong health. Research is now showing that babies culture their gut bacteria and set the blueprint for gut health during the birthing process when they come in contact with mom’s flora.

When this doesn’t happen (c-section) or when it is altered (antibiotics), it can have a lasting effect on baby. Obviously, both of these things are sometimes unavoidable, but it is important to understand the role they have when making birth choices.

Chris talks about specific foods and nutrients that traditional cultures have included in pregnancy diets for years and that research is now showing are still important.

Foods like healthy fats, organ meats, broth, fermented foods and an abundance of vegetables all play an important role in a baby’s development in the womb and deficiencies in any of these can have drastic consequences.

Women are often told by their doctors to eat a high fiber, whole grain diet and avoid fish (especially certain types) and other foods. Chris talks about how the benefits of seafood consumption far outweigh the risks and how seafood naturally contains selenium which helps negate mercury absorption in the body.

Folic acid is considered an important nutrient during pregnancy, but we talk about how this is the synthetic form that many women are not even able to absorb, and how the natural form, Folate, is better. Some women need to take it a step further (if they have the MTHFR gene mutation which inhibits their ability to properly use folate) and take 5-MTHF, which is a methylated form.

Chris talks about resistant starch and prebiotics and how these play a role in gut health and are just as important as probiotics for a healthy gut.

We also talk about protein and starch requirements during pregnancy, how to recover from contraceptive use and much more. Don’t miss this episode! Listen on iTunes or Stitcher or watch the video below.