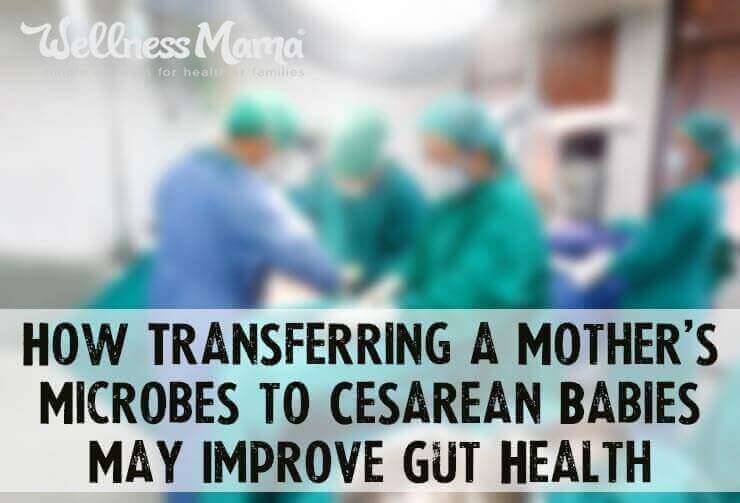 I’ve seen multiple recent stories in the news about a “groundbreaking” new way that researchers are hoping to improve gut bacteria and immune health in cesarean babies. In short, they are talking about a way to mimic the natural gut bacteria transfer that happens during the birthing process with microbial wipes (I wrote about this last year in my gentle cesarean post).

When I first saw the reports, I had to shake my head and laugh while simultaneously filing the info under “things I wish I’d known 6 years ago,” and “things that nature has known forever.” I never thought I’d end up having a c-section (until Placenta Previa changed my plans) and until I had one, I hadn’t bothered to research much about them.

If I had, I might have stumbled upon some of the fascinating research covered in the movie Microbirth and reported by researchers that cesarean babies and babies birthed vaginally have much different gut bacteria. Research is showing that when a baby passes through the birth canal, important bacteria is transferred from mother to baby. This bacteria helps form the baby’s immune system and seeds the gut.

This makes sense intuitively, as there is a lot of research about the potential for certain strains of bacteria, like the Group B Strep bacteria, to be passed to baby during birth and the consequences this can have. As the vagina is a bacteria-rich environment, it seems only logical that other bacteria, especially beneficial ones, are passed on as well.

What Happens in A C-Section?

I should preface by reiterating that I have had a c-section that saved my life and my son’s life, and I am extremely grateful for it. At the same time, as any mom who has had one can attest, the birthing process is quite different during a c-section.

This is logical, and certainly there are many cases that c-sections are medically needed and life-saving. At the same time, the normal bacterial transfer doesn’t happen during the cesarean for babies as it does during a vaginal birth.

The baby is born in a (hopefully) sterile environment and removed through the lower part of the mother’s abdomen without making contact with the birth canal in the same way. Of course, some babies may get exposure, especially if a mom’s water has broken before the surgery. We also now know that some of this bacterial transfer happens in-utero (while we once thought babies gut’s were sterile until birth).

We’ve known for a while that there is a difference in gut bacteria between cesarean babies and babies born vaginally, but we are only beginning to understand the implications of these differences as researchers are now finding science-based ways to help bridge this gap.

This is the part I wish I’d known before I had a c-section. My son was our only child to have allergies (a dairy allergy) and skin issues. While we were thankfully able to help him reverse most of these struggles, it is a battle we may not have had to fight if I’d known what this research is finding, that there are ways to help encourage this microbial transfer during c-sections.

Stay with me on this one… there is a practical and very logical way to help transfer mom’s microbes to cesarean babies and this is what the emerging research is showing. Something as simple as using a piece of gauze that has been in mom’s birth canal to swab the baby after birth may have far reaching benefits for cesarean babies.

Yes, this research is suggesting that we should use gauze that has been in mom’s vagina to wipe down baby’s face, mouth, eyes and skin immediately after birth. No, this is not gross. In fact, this was suggested in the movie Microbirth over a year ago, and I also wrote about it in this post.

While the research makes it sound fancy, the reality is that while we are finally studying this in a clinical setting, doctors and midwives have been trying this for years with good results. And it isn’t as complicated as it sounds. The fancy “microbe wipe” is just a piece of gauze that contains mom’s beneficial bacteria, and this one small step could make a big difference in baby’s health!

In fact, as some studies have shown the potentially higher risk of obesity, immune problems, diabetes, asthma and allergies in babies born via c-section, this research could have dramatic benefits. Especially as c-section rates continue to rise far beyond the World Health Organization’s recommended 15% (to as high as 70% in some places), finding ways to create this microbial transfer will become more and more important.

Though this initial study is small, it is so encouraging to see this link being studied at all and I’m hopeful that the positive results will lead to many more studies.

In this sample study, Dr. Maria Gloria Dominguez-Bello, an associate professor of medicine at New York University and lead author of the report, studied 18 babies, 7 born vaginally and 11 via cesarean.

Four of the babies born via c-section were swabbed with a piece of gauze that had been cultured with the mother’s vaginal bacteria. For this study, sterile gauze that had been moistened with a saline solution was inserted into mom’s birth canal. It was removed as the cesarean began and used to stimulate the transfer during birth, though other researchers have considered the possibility of not using the saline and using a dry gauze instead.

Nurses were instructed to wipe the baby’s whole body, including mouth, skin, genitals and rectum with the wipe. While the study was small and the transfer quick, the beauty of the study was in the follow up testing.

Dr. Dominguez-Bello’s team tracked the babies’ microbes with over 1,500 samples from the babies and their mothers during the first month. The results were fascinating:

The researchers did note that the gut bacteria in all babies born via c-section were still less diverse than those born vaginally, but the mere fact that the swabbed babies had many of the same strains is encouraging.

This study also doesn’t take into account the vast differences that can occur, even in babies born vaginally, depending on how long the baby spent in the birth canal, if the mother or baby received antibiotics, the mother’s gut and vaginal bacteria and a variety of other factors. Also, as antibiotics are given routinely during c-section it is not possible to adjust for this variable in a small study like this.

Potential Problems with This Study…

This initial study was very small and while the results were promising, they aren’t big enough to be statistically significant. The lead researcher on this study noted that a much larger study is underway at New York University with almost 100 mothers participating and with a follow-up period of a year. Hopefully, these larger studies will encourage hospital-based research and more widespread experimentation with this type of transfer.

Another potential problem that I see with this study is that all c-section moms are routinely given antibiotics during birth, and the study even mentions that this was done as a precaution. Unfortunately:

As we know, the antibiotics affect the mother’s resident microbes, inhibiting susceptible bacteria and selecting for resistance. The closer the dose is to birth, the greater the possibility that she will pass a skewed population of microbes to her baby. (source)

I found it somewhat funny that for now, the researchers are not recommending that mother’s (or doctors or midwives) attempt this on their own, since there is “a risk they could inadvertently transmit dangerous bacteria to their newborns.”

I can understand the researchers’ need to protect themselves and to not encourage any procedure until it has been studied more in depth. At the same time, this is the process that happens naturally in every vaginal delivery. Ironically, I’ve had friends and doula clients ask their doctors to do this microbe swab after a cesarean and several were met with disgust and outright refusal from the doctors because “that is disgusting.” Yet, it happens during birth all the time. Vaginal birth certainly isn’t sterile or clean or any less “disgusting” (by their definition).

The researchers on the study said that they hope to do more extensive studies and follow these babies for several years to see if the transfer can make a difference in longer term outcomes like asthma, allergies and obesity and that “they would try to develop a probiotic that contains the specific microbes that babies need.”

Personally, I hope that researchers and doctors will work to lower our drastic c-section rates (over 40% in my state) to closer to the WHO recommendation of 15% (which would reduce the need for these types of interventions in the first place).

After watching Microbirth and reading additional research, I’d do the microbe swab myself if I ever had another cesarean. I know quite a few doctors and midwives who are testing a similar procedure with their patients and it is one that I hope many more women will ask their health professionals about and consider as more research emerges.

What do you think? Fascinating? Disgusting? Would you do it?

Why I Don’t Post About My Kids Online
Next Post:Supplements for Pregnancy & Nursing: What I Take