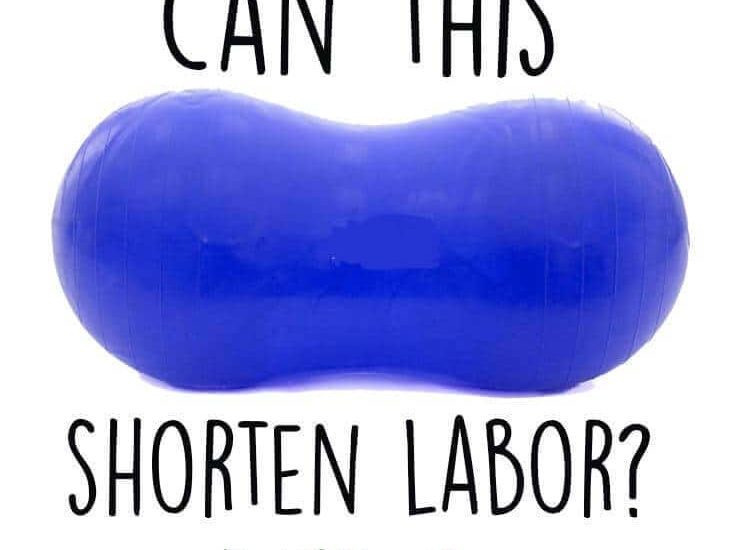 I recently attended a hospital birth as a doula and a nurse suggested a new technique to shorten labor that I had not seen used before: a peanut ball.

I was familiar with the use of a yoga ball or “birth ball” during labor to help open the pelvis and bring baby down but I had never seen this variation. The nurse suggested it when the baby’s heart rate started showing some slight decelerations when mom was walking around, and since baby was not fully engaged in the pelvis yet, they wanted mom to try laying down to see if that helped. (Short story: laying down helped and so did the peanut ball.)

This piqued my curiosity.

The Benefit of Birth Balls

Birth balls (aka yoga balls) are often recommended during pregnancy and labor to help mom in various ways. There is evidence that they may:

These effects have been studied and women who used birth balls regularly during pregnancy typically had shorter labors, less need for pain relief, and fewer c-sections. Of course, if you are pregnant, check with your doctor or midwife to make sure using a birth ball is safe for you and to find out the best ways to use it.

Personally, I’ve used a birth ball during four pregnancies and deliveries, including two in a hospital where we had to bring our own (I’m sure we were a sight when we checked in with me in transition and my husband carrying three bags and a birth ball).

I also love birth balls after labor, as my babies all love to bounce to fall asleep (my mom insists that this is because I’m always moving and never sit still when pregnant so they get used to it). I’ve spent many a late night gently bouncing a baby on a yoga ball while playing classical music.

There are many ways to use a birth ball, from switching out your regular desk chair for the ball to more complicated exercises and stretches. These are a few of the ways that have been most helpful and comfortable to me during pregnancy and labor:

What is a Peanut Ball?

So birth balls certainly have their benefit, but I’d never seen a peanut ball used before. A peanut ball is basically a double birth ball, connected in the middle. It looks like a peanut, thus the name. (This is what they look like and is very similar to the one they had at the hospital).

Like a birth ball, this can be used to sit on, to stretch, or for better posture (and probably also to bounce a fussy baby (I’ll keep you posted on that one!).

Unlike a birth ball, it doesn’t take circus-like coordination to sit on or to keep between your legs, which is exactly why the hospital used it during labor. Once a mom has to lay down, like in the case of this mom when her baby was having some slight deceleration after contractions, it can help keep the hips in the optimal position for labor and widen the pelvis to speed things up.

I started researching to see if there was any history of use of peanut balls or if this particular hospital had found something new that works. Turns out, both were true.

The use of peanut balls in labor is a relatively new idea but it has already been studied and is being implemented by hospitals looking to reduce c-section rates.

A healthcare company out of Arizona is equipping all of its labor and delivery wards with peanut balls after a recent study conducted showed a noticeable reduction in c-section rates and labor time in women who used a peanut ball during labor.

This effect was especially pronounced in women who had an epidural, but would be effective in any woman who needed to lie down on her side during labor.

Christina Tussey, a clinical nurse specialist in Arizona decided to test the idea and recruited two groups of women to help: those who would use a peanut ball and those who didn’t. (Of course, this was not a double blind or placebo study as a woman would know that she had an exercise ball between her legs.) She found three noticeable benefits in women who used the peanut balls (source):

Thanks to the results of this observational study, Banner Health, Arizona’s biggest chain of hospitals, has provided peanut balls to all of its hospitals for use in labor and delivery.

How the Peanut Ball is Used in Labor

As mentioned, the peanut ball is used for any women who needs to remain in bed during labor. Most often, this is because of an epidural, but there are many reasons that a woman may need to lie down and some women just feel more comfortable in this position.

The way I saw the peanut ball used and the way it is suggested in labor is when a woman is lying on her side. She actually shifts her weight so she is leaning slightly toward her stomach and then places her top leg over the peanut ball. The shape of the ball helps her maintain this position, even if she can’t feel or move her legs, and simulates a partial squat position by opening the pelvis.

This allows the laboring mom to rest and relax while still optimizing her pelvis and hopefully speed up labor.

I’ve actually ordered a peanut ball after seeing it used in labor, even though I don’t plan to have a hospital birth or use an epidural.

Since this is my sixth baby, my hips tend to get sore at the very end of pregnancy and I often find myself using a stack of pillows to relieve the pressure while I am sleeping, though the pillows never seem high enough and they often fall. I’m planning to use the peanut ball in the “labor position” during sleep in the last few weeks of pregnancy.

I have also had long labors in the past (24 hours+) and have had to eventually try to rest, as 24 hours of standing, walking and squatting doesn’t leave much energy for pushing. If this should happen again, I’ll use the peanut ball while resting to keep my pelvis open.

Have you ever heard of a peanut ball? If you’re pregnant, will you give it a try?

How to Make Butter
Next Post: Superfood Gingerbread Latte Recipe