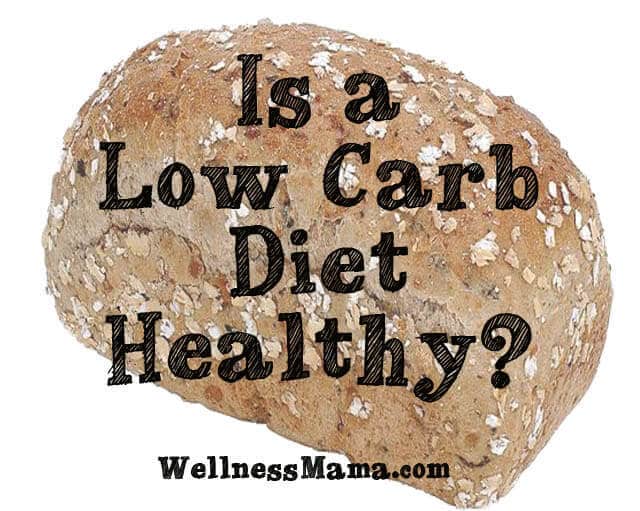 Is a Low Carb Diet Healthy?

“Is a Low Carb Diet Healthy?” This question has been swirling around the blogosphere lately with many different answers.

Some claim that really low-carb is the only way to go, others claim that eating low carb messed up their thyroid or other hormones.

One important distinction that must be made is between low-carb and grain-free. These two are often lumped together and then the argument is made that grain-freeis unhealthy because it is too low-carb.

Certainly, one could eat a very high carb grain-free diet, or a somewhat low-carb diet with grains. For the sake of understanding the health aspects of either diet, they must be separated.

You know how I feel about the dangers of grains, so for now, let’s just address the low-carb aspect.

Can Low Carb Affect Your Hormones?

Short answer: Yes. But this can vary widely by individual and can be both positive or negative, depending on the person.

Some people (a very small percentage of my clients) who jump into low carb from a very high carb diet will experience some thyroid-like side effects a few weeks or few months after switching such as fatigue, coldness in extremities, hair-loss or other problems.

The interesting factor here, is that when these people have their hormones tested, most thyroid panels will come back normal (because most doctors only test Thyroid Stimulating Hormone or TSH and T4 hormones).

In my experience, these clients are also ones who went low-carb for weight-loss reasons and often have an underlying hormone issue to begin with.

Interestingly, even for those who have completely normal blood results, adding a lot (like Standard American Diet a lot) of carbs back to the diet will make these symptoms go away. This obviously means that low-carb is bad for these individuals…. right? Nope! And actually could mean quite the opposite.

I’ve noticed with clients that those with the worst “carb flu” in the beginning either had a lot of weight to lose or had an underlying hormone imbalance, and that logically, these people would benefit the most from going low-carb in the long run. Unfortunately, because of the carb flu, these people often had a to take a gradual path to low-carb, or the symptoms would be overwhelming and they’d be overly fatigued.

For a long time, I considered this slow-transition a problem, and was able to find some things (adding more natural salt into the diet, taking magnesium and gelatin, etc.)  that made the transitions easier.

While these supplements do help the transition, and I’d recommend them anyway, a recent article by Dr. Cate Shanahan helped me understand why some individuals experience these thyroid like-symptoms after going low-carb for a while and explains why the slow-transition might actually be the best thing for these people.

Dr. Shanahan explains that advanced thyroid testing will often reveal that these individuals have an extremely elevated reverse T3 level (rT3) and at this point, most doctors will prescribe T3 and think that the problem is solved. Dr. Shanahan explains the rT3 has the opposite effect of regular T3 and essentially makes the body think it needs to hibernate and prepares for such (weight gain, fatigue, brain fog, etc.).

Since high levels of rT3 can also lead to high LDL Cholesterol (that’s the bad one) this is definitely something that needs to be addressed!

Dr. Shanahan has a theory on this and explains it much better than I could:

In doing research on rT3, I ran into afascinating article on a group of little-understood compounds called thyronamines (pronounced thigh-row-na-meens). The key to understanding rT3, and unlocking the relationship between carbohydrate consumption and thyroid function, may lie in these newly discovered compounds.

Studies performed in 2010 showed that injecting thryronamines into the belly cavity or brain tissues of experimental animals cause the following physiologic and behavior changes:

She goes on to explain that this phenomenon is similar to bears before hibernation, and this drop in rT3 caused when berries and other readily available carbs disappear creates the fatigue needed for hibernation. Unfortunately, for those of us not interested in hibernation, this can be a problem.

That’s not what I’m saying at all, and compared to the amount of carbs that the average person consumes these days, “low-carb” is definitely more healthy. I still advocate removing grains, since, carbs or not, there is no need for grains.

If you are part of the group that suffers from severe carb flu when you remove carbs, or if you’ve gone low-carb for a while and then started to lose energy and gain weight, it’s possible that your rT3 is elevated.

Fortunately, while suddenly removing carbs shocks the system, doing it gradually often helps the system adjust. Dr. Shanahan recommends that patients who suffer from these symptoms go low-carb slowly beginning with breakfast and slowly reducing overall carbs over a period of time.

From what I’ve seen with my own clients, this can be helpful and necessary, especially for those who already have an underlying hormone struggle or who have a severe reaction to removing carbs.

I’d also suggest certain supplements to help support the body during the transition!

Despite the recent firestorm of information about the possible “dangers” of low-carb and the “importance” of eating more carbs, especially from grains, I maintain that there is NO biological need to consume grains, even if you want to eat a high carb diet (try sweet potatoes, fruit, squash, etc.).

Most people will be able to transition to a low-carb diet, even quickly, without a problem, and those with a history of thyroid problems or hormone imbalances may just need to take it a little slower.

Unless a person’s endocrine system is severely damaged, he or she should be able to transition to a low-carb diet over a period of a few months without any adverse health reactions and see weight loss and health improvements as the body adjusts.

Do you eat too many carbs or too few? Are you even worried about your carbs? Weigh in below! (no pun intended!!)