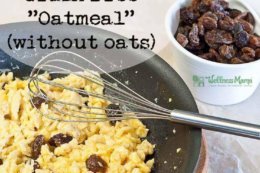 Do You Have a Wheat Belly? Interview with Dr. William Davis
Next Post: Homemade OxyClean Stain Remover